Home » Destinations » Inside the World of Breaking Bad

Inside the World of Breaking Bad

Thursday morning in Albuquerque, a little before 10am, we catch a glimpse of the 1986 Fleetwood Bounder RV parked against the restaurant wall and make a beeline toward it. Rounding the back corner of its tailgate, we expect to be met by a 50-something man in his tighty whities. “Say my name.” For this is the tour of Breaking Bad….

Step inside this three-hour tour as we explore the neighborhoods, sights, and sounds of Walt and Jesse whose lives were forever changed as they hooked up to cook together.

Sitting across from the cook stove of the RV with its three big kettles atop their burners, I reflect on the plot twists and turns their lives took and how each character came to be so very interconnected. Even Saul Goodman – he got a whole spinoff series from it.

This RV tour begins its route around Albuquerque with a stop at Jesse’s house. This middle-class, warm southwestern adobe home sums up the life Jesse had growing up and the one he aspires to live again throughout the show.

On this day there is not an RV parked in the driveway nor a meth lab in the basement but as we pull away, headed for our next stop of The Doghouse, I can easily envision Jesse in the window, looking out at us, maybe waiting for Jane.

As we roll down the street toward Badger’s corner, our tour guides, Frank Sandoval and Jonny Meeks, relive scenes from the show. They are both actors who worked on the show and are active members of the Albuquerque Film Board.

Waving to passersby on the street corner, we continue on to the next location: Combo’s corner. As the scene plays for us on a big screen TV display in the RV, we stop and pay homage at the spot of Combo’s murder. A small-time dealer distributing a big-time product called “Blue Sky”.

Blue Sky is the 99.1% pure methamphetamine Walt, aka Heisenberg, manufactures. Today, Blue Sky rock candy is cooked up by Albuquerque’s own TheCandyLady.com. She created this version of the sweets specifically for the show and now you can purchase your very own stash of Blue Sky rock candy from her store to take home.

You can even have your photo taken with Walt, Jesse, and a pan of Blue Meth.

Following Wendy and Jessie Through Albuquerque

After leaving Combo’s turf, we drive for a few minutes to another, somewhat more industrial part of town. All the while, our guides narrate facts about the show and even test our knowledge with trivia designed to separate the die-hard fans from the mere novices. And what could be a better prize than a dime bag of Blue Sky rock candy!

As we look out the window on our right, we approach the junkyard and turn into its entrance making a large U-turn once inside, so we end up facing Jesse’s famous port-a-potty. Yep, the very one he fell through, getting covered in slime before hijacking the RV and crashing the gate as he drove out of the yard.

Such a thrilling moment for Jesse in the show. We relived it on the tour as our guides gunned the engine and stomped on the gas pedal, taking us through the front gate. Only this time it was open.

Coming up next is the Crossroads Motel. Wendy must be inside sleeping, for her corner streetlamp was deserted. Our guides took this opportunity to tell us of a new event called “Tasting Bad” where the food from the show is featured for guests to try.

Where They Ate and Slept 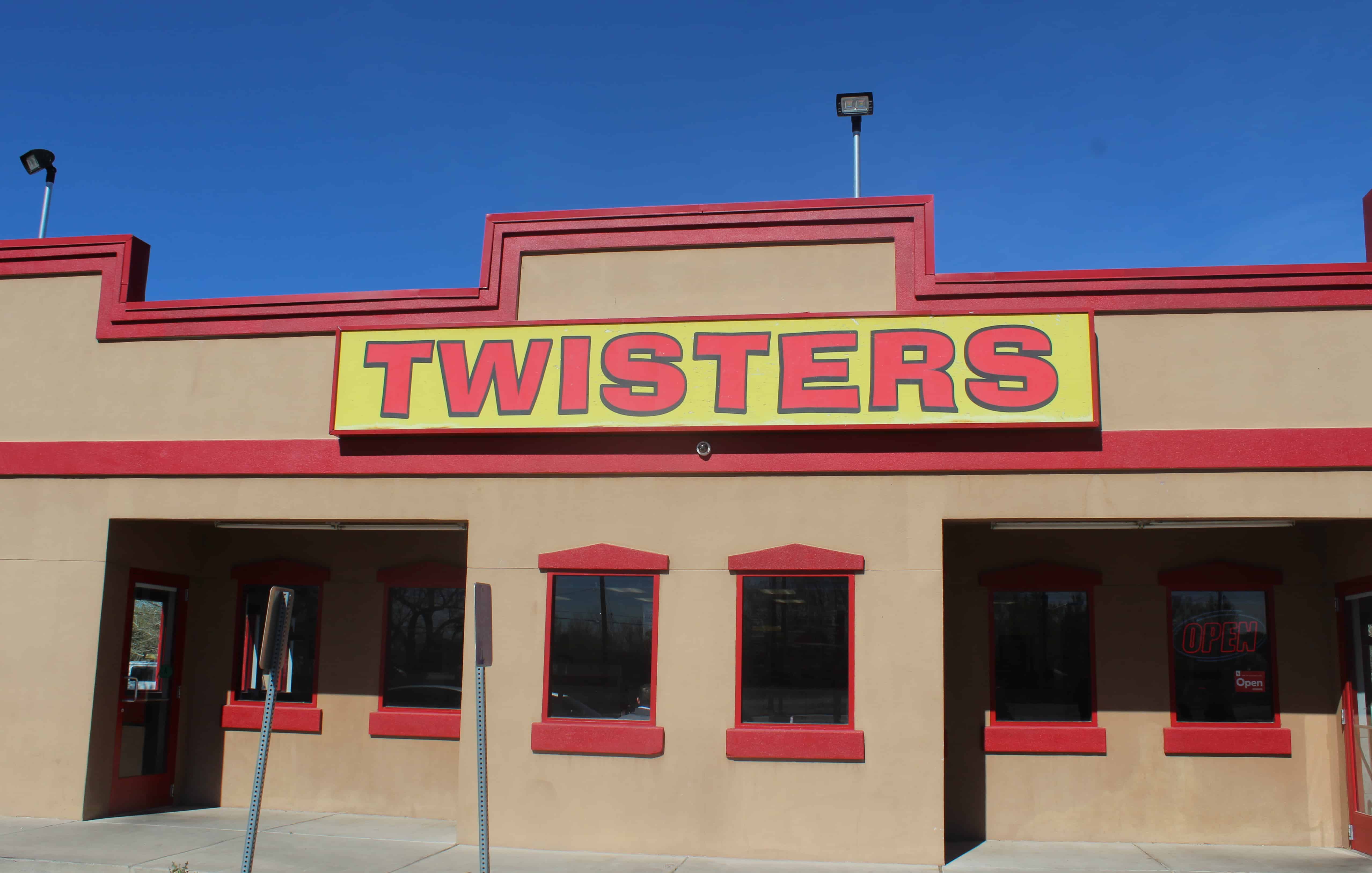 Speaking of food, we stopped for lunch at Los Pollos Hermanos, otherwise known in Albuquerque as Twisters. Entering the restaurant certainly transports you into the show for it is exactly the same. The same red and blue color scheme. The same plastic and vinyl tables. The only thing missing was Gus Fring, asking if our food was to our liking.

Another fast food stop popular with the DEA is Blake’s Lottaburger and this is where we stopped to eat lunch ourselves, courtesy of the tour.

Through the many crossroads and twists Jesse faced, each changing him in some way, the first was Combo’s death but more profoundly was the death of Jane. In the apartment they shared, Jesse experienced connection for another person so deeply he called it love. Her death shook his world, waking him up to his own humanity and frailties.

Sitting in front of this small, peach-colored duplex, everyone falls silent. Some even become teary-eyed remembering the scene where Jane dies while Walt stood aside, and Heisenberg stepped in.

At the juncture of a T in the road in a family-oriented cul-de-sac, sits Walt’s home. And home it is for him. It represents the center of his world, the reason he does anything. The reason he becomes a manufacturer of meth. The reason is this home houses his family and his family means everything to him. Even in Season 3, we hear him tell Saul Goodman, “I have lost my family. I have lost everything.”

On this sunny 70° day, Walt is not home. The driveway is empty and there are no pizzas on the roof. In fact, now there is a fence around the yard as a barrier to fans who got a little carried away with the pizzas. Today there is a gardener in the yard. She smiles and waves as we gather in front to take photos.

I have to admit, even for a newbie to the fandom, this was exciting.

Saved for the end of our excursion are two important places which can be entered and toured. We exit the RV and walk through the now-famous car wash. Once fictitiously owned by Walt and Sklyer, the car wash is now a reputable business, earning an honest living cleaning the line of cars which queue up six or seven deep.

After snapping some photos, we board the RV one last time to visit the laundromat where Gus hid his super-lab for manufacturing vast quantities of blue meth. We walk through the bins of linens, down a steamy aisle leading to the washing machines.

Of course, today there is just a large blue washing machine but in the world of Breaking Bad this was the gateway to the super-lab. The cream of the crop, in Walt and Jesse’s underworld drug den.

Relive the Story with Each Stop Along the Way

Throughout the seasons of Breaking Bad, like in any great story, we become intimate with each of the characters. Liking some, hating others. Ultimately, they reveal their humanity to us, sharing with us their emotions and their journey.

A well-spoken, mild-mannered high school chemistry teacher receives the diagnosis of Stage 3 lung cancer. He is 50 years old and about to take control of his life, for the essence of his very life depends on it.

We first find him devoted and motivated by love for his family. Through the storylines of this well-crafted saga, we witness the changes that lies, power, corruption, money, and meth can deal. We feel for Walt, for Jesse, for Skyler, for Jane because they reflect parts of ourselves, as well as our own humanity.

For many on this RV, the three-hour tour relives their favorite show. Icing on the cake. They are familiar with every detail and every stop has meaning. For me, I began this tour as a novice, now it has had the reverse effect; it has piqued my curiosity and consequently I, too, am a fan of the show.

All I can say is, “Yo, bitch!,” when in Albuquerque, ride BreakingBadRVTours.com and live inside the world of Breaking Bad.

MaryRose Denton is a freelance writer, traveler, licensed massage therapist, yoga teacher, lifelong vegetarian, and most importantly a mother. She enjoys the mash up of these that life brings and writes about them with insight, humour, and wit. A native to the Pacific NW, MaryRose lived for a short duration in Canada before returning home to this richly beautiful area. She has traveled overseas, exploring and visiting friends in their native homes allowing herself a deeper and richer understanding of...read more