The exact moment I lay my eyes on The New York State Capitol Building, set regally atop State Street hill in Albany, I’m stopped dead in my tracks. I shake my head in awe, whistling aloud at its overwhelming beauty. I dare say this was the idea behind the men who built it; make people stop and pay attention…

The fact that it was designed under the guidance of not one, not two, but five architects, took over 32 years from breaking-ground-to-finishing-touches and cost more than 25 million dollars back in the late 1800’s, doesn’t escape my notice either.

Part of the Empire State Complex, this Capitol Building happens to be one of many impressive structures located on State Street, within the expanse of Albany’s Capitol Park. 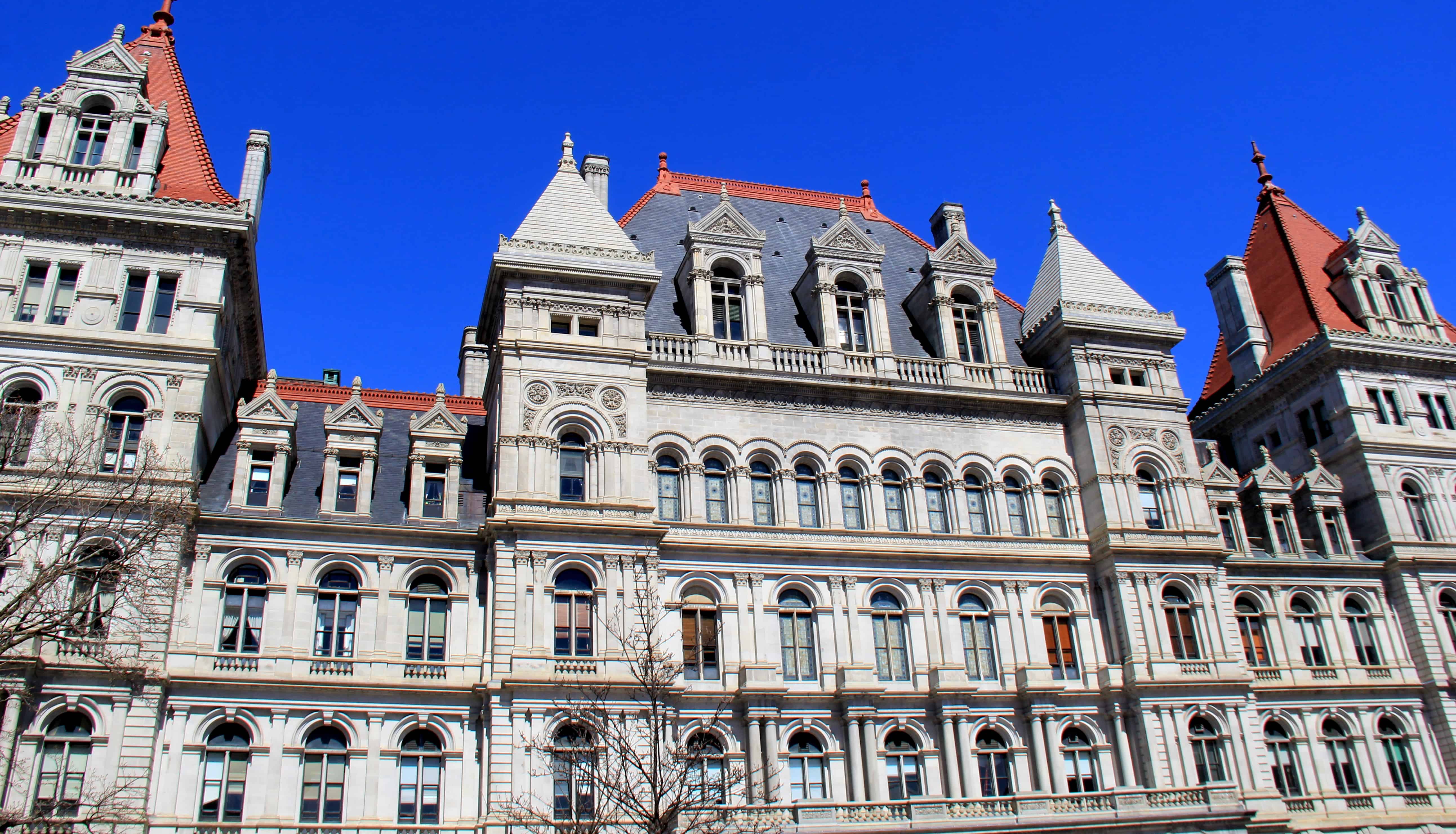 At first glance, it looks like it could be a Victorian estate, a humongous hotel with plenty of sleeping quarters, or a stunning Gothic castle with a gazillion windows and stairways one might find in another country.

The difference in its imposing stature, making it one of the most prominent buildings in the Capitol Region, could be the mix in styles of architecture that make up the property. A careful, artistic blend of Italian Renaissance, French Renaissance and Romanesque designs sets this attraction far apart from any other in the Capitol District area.

Of course, another distinct possibility could be that The New York State Capitol Building is believed to be haunted and is one of 65 amazing properties on The Haunted History Trail of New York State. There have been more than a few ghost sightings reported over the years at the State Capitol. Both workers and lay people alike have claimed to see apparitions or hear eerie noises in the night. I was lucky enough to have an animated tour guide willing to share some haunted stories with me while wandering through the halls and rooms of this remarkable building. 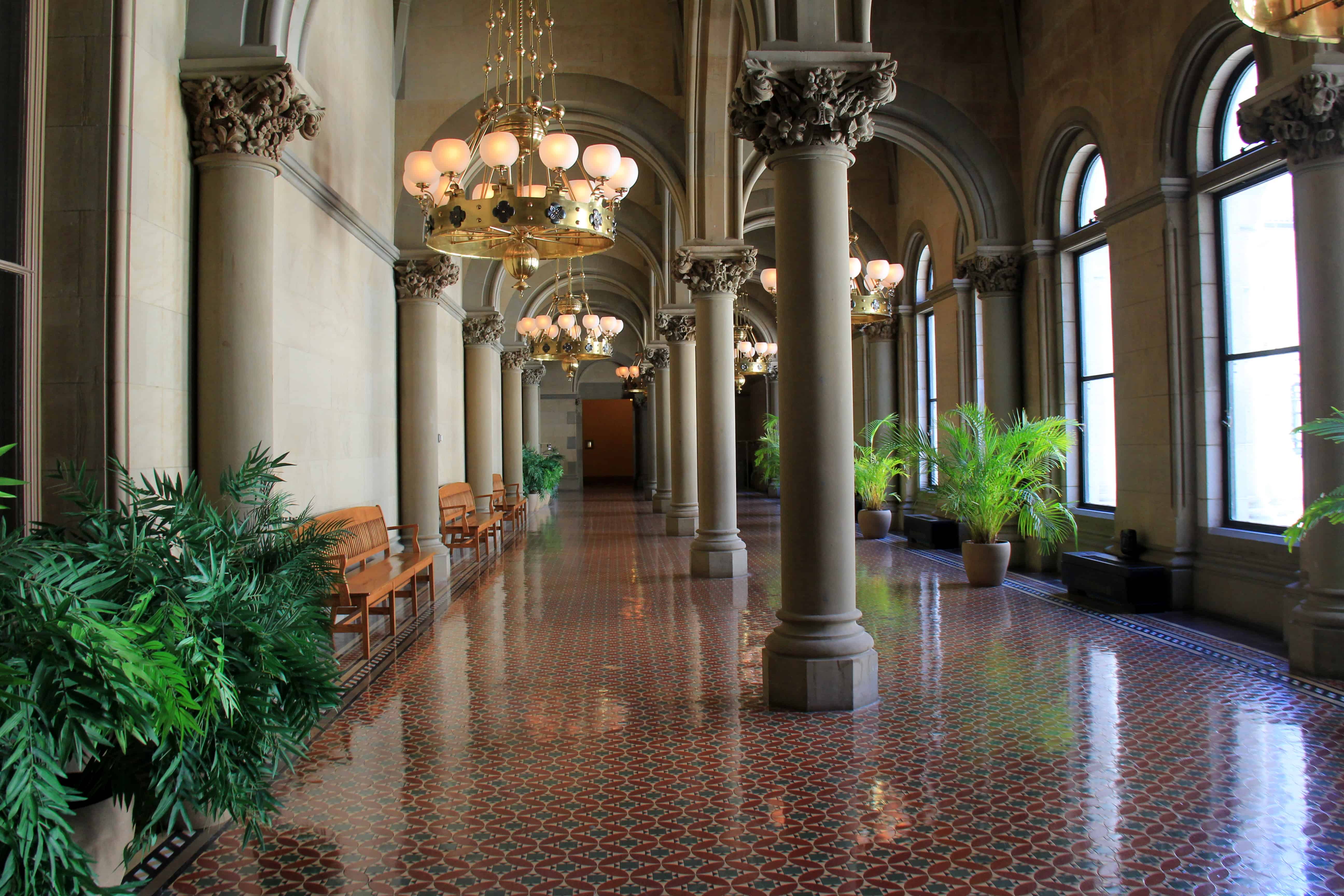 Once beyond the security guards, the interior is striking, unlike anything I’ve seen before. Many of the walls are four and five feet thick. In some places, the flooring is original, allowing me to almost see my reflection in the high-polish shine.

The lighting is dim and seems to mostly emanate from elaborate fixtures. I can see them perched on staircases, hanging from sandstone walls and ceilings. They add to the feeling that The New York State Capitol Building is haunted, indeed. Any other light is natural and streams in through tall glass window panes, or from numerous skylights above us.

I have to crane my neck to see the beauty of the vaulted ceilings. In the intricate stonework carvings I spot some of the 77 recognizable famous faces. Other carvings, touted as the ‘Capitol’s Unknown,’ remain unidentified to this day. 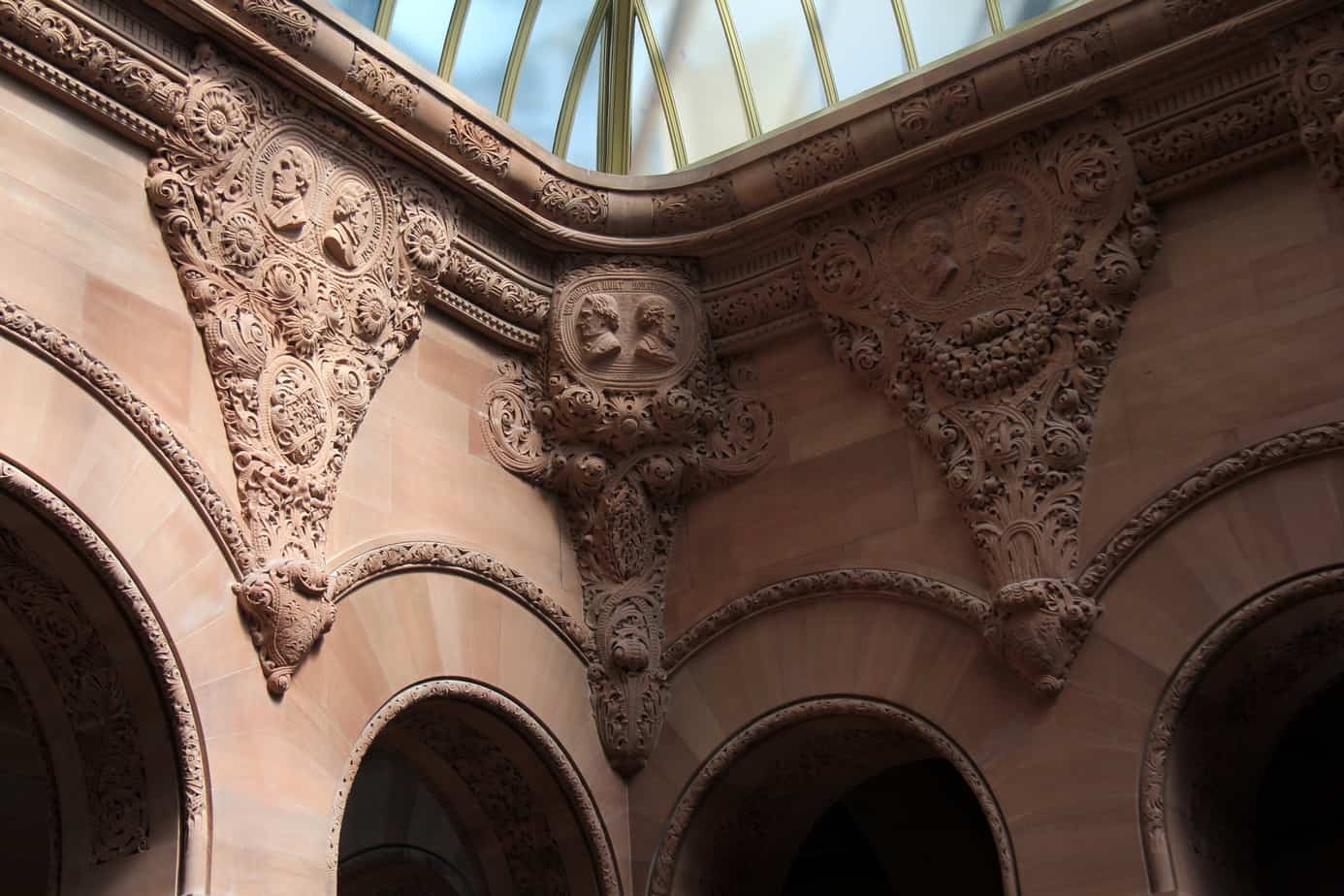 After the commissioned faces were complete, the stone carvers, most of them from places like Scotland, the United Kingdom and Italy, were allowed to carve a memory into the sandstone if they so choose. Some carved the face of their wife back home, while others chose the youthful face of a daughter instead. 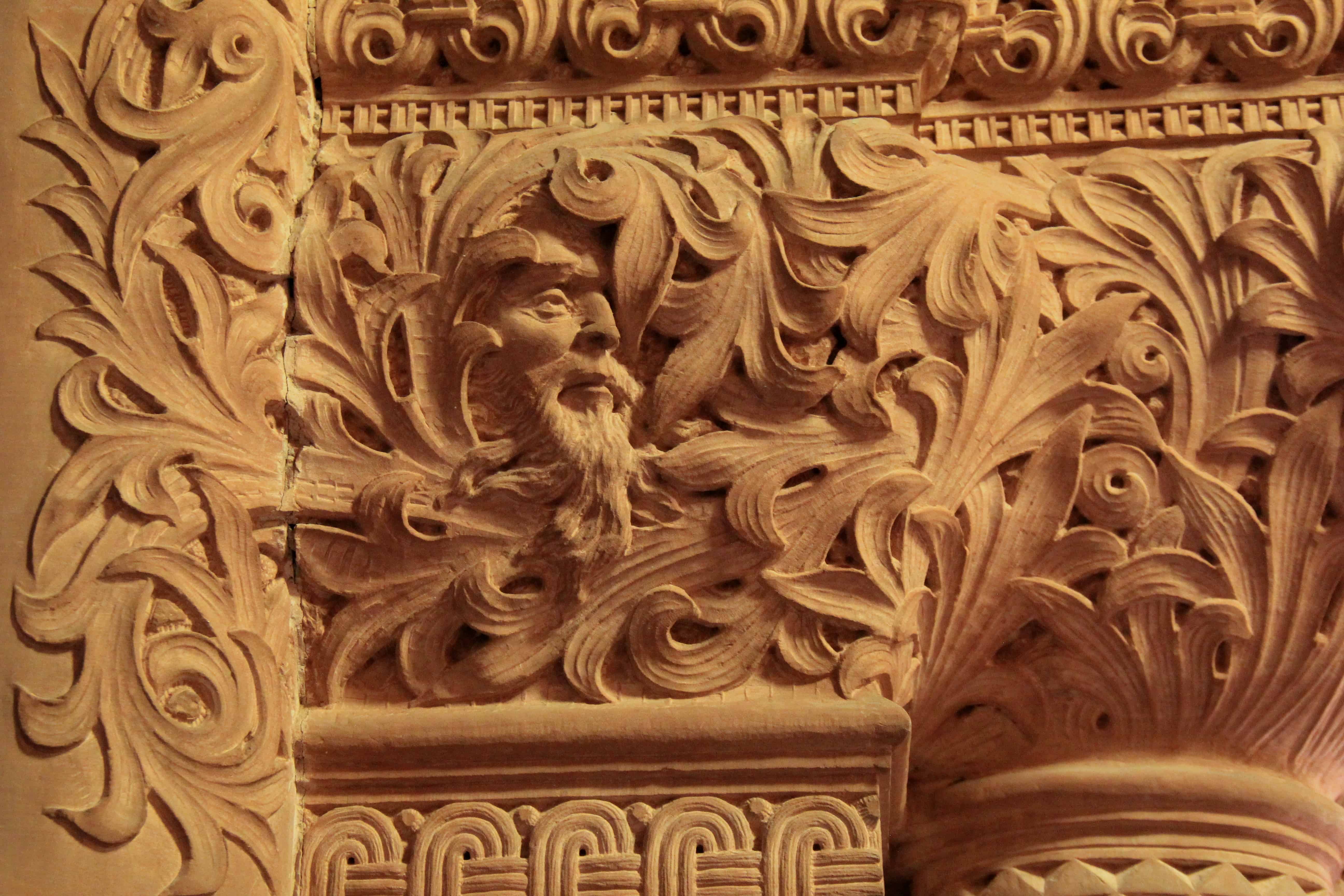 Another stone carver was more devious, fashioning the small face of a devil, tucking it into scroll-like carvings along one of the long, dark hallways. 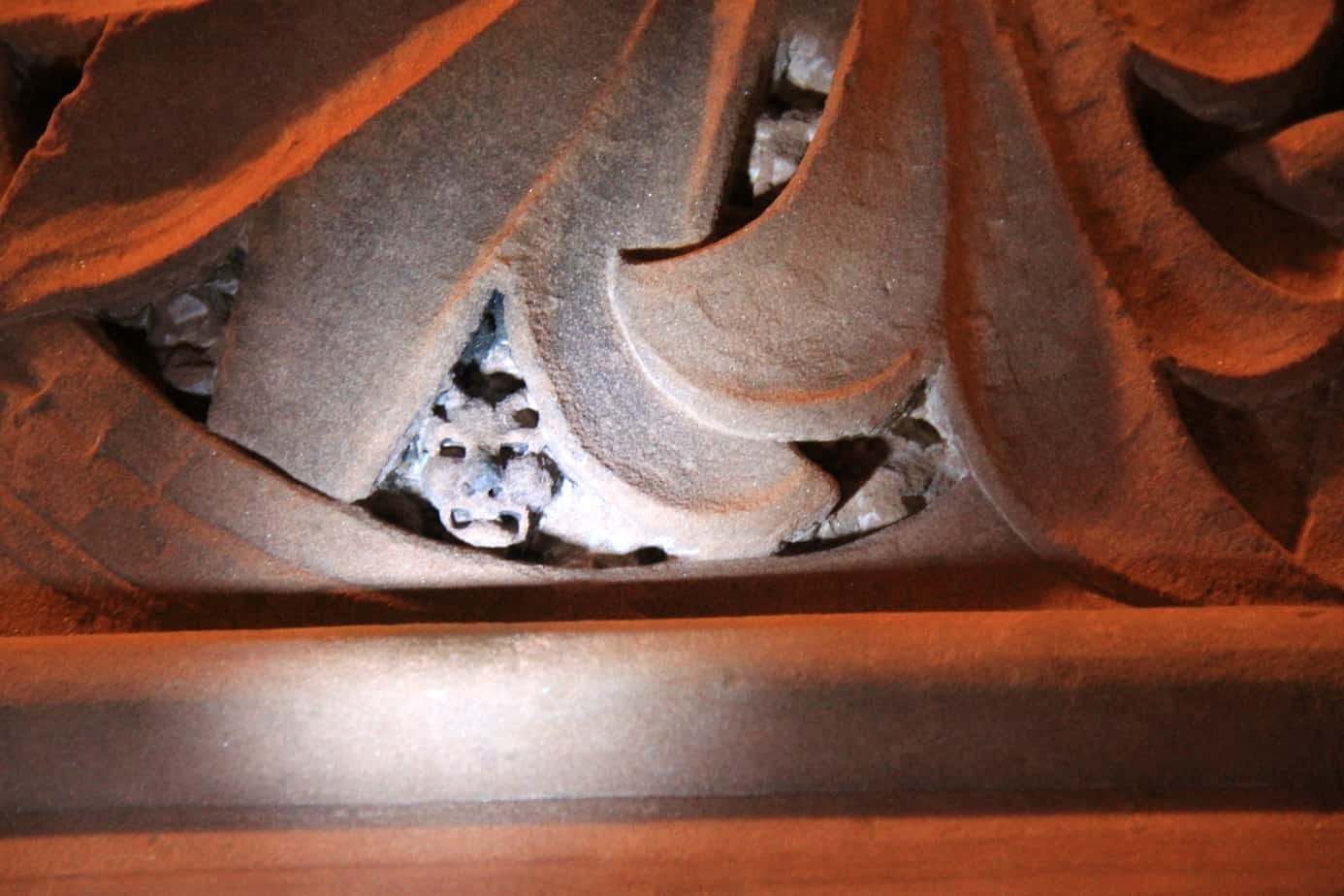 When the tour guide points it out to me with his flashlight, I gasp. “How did anyone even find this?” I ask. “It’s so small and man, it’s sure creepy! I would have never spotted it!”

He laughs and says, “The story goes, if you can find this demon on your own, without help from another, you are, yourself, a devil.” He looks right at me. “So, I’m a bit relieved that I had to point it out to you.” 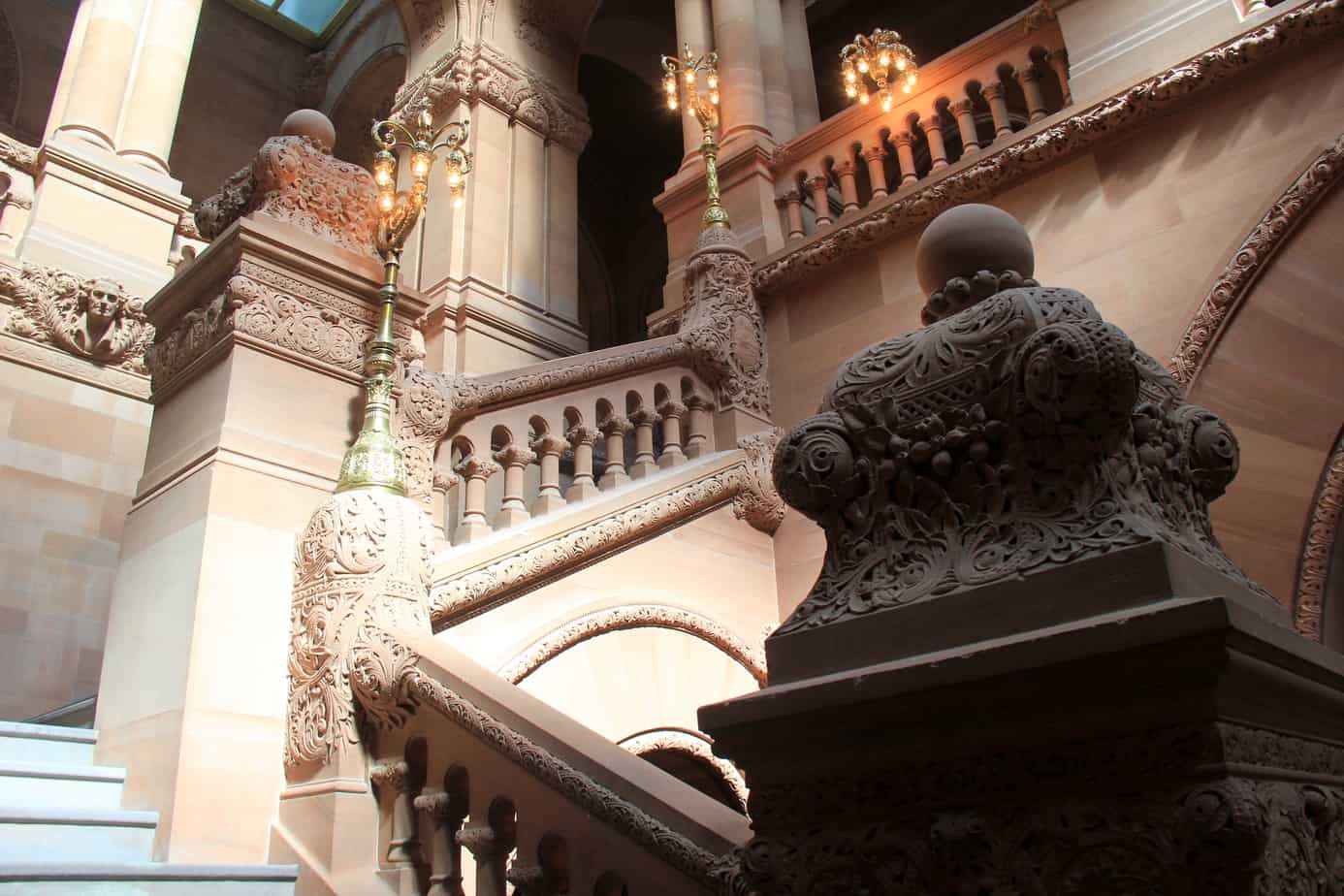 As we walk up the breathtaking, Million Dollar Staircase, making our way to the 2nd and 3rd floors, he tells me about yet another haunting.

Hauntings Still – Not All in the Past

One night, a female tour guide had escorted everyone outside and went about her merry way, retracing her steps, making certain that the doors were shut and secured for the evening. When she got to a certain floor, something caught her eye. As she turned to look over her shoulder, she watched a dark, cumbersome shape fall to the floors below. She ran to the wall overlooking the courtyard, but saw nothing. 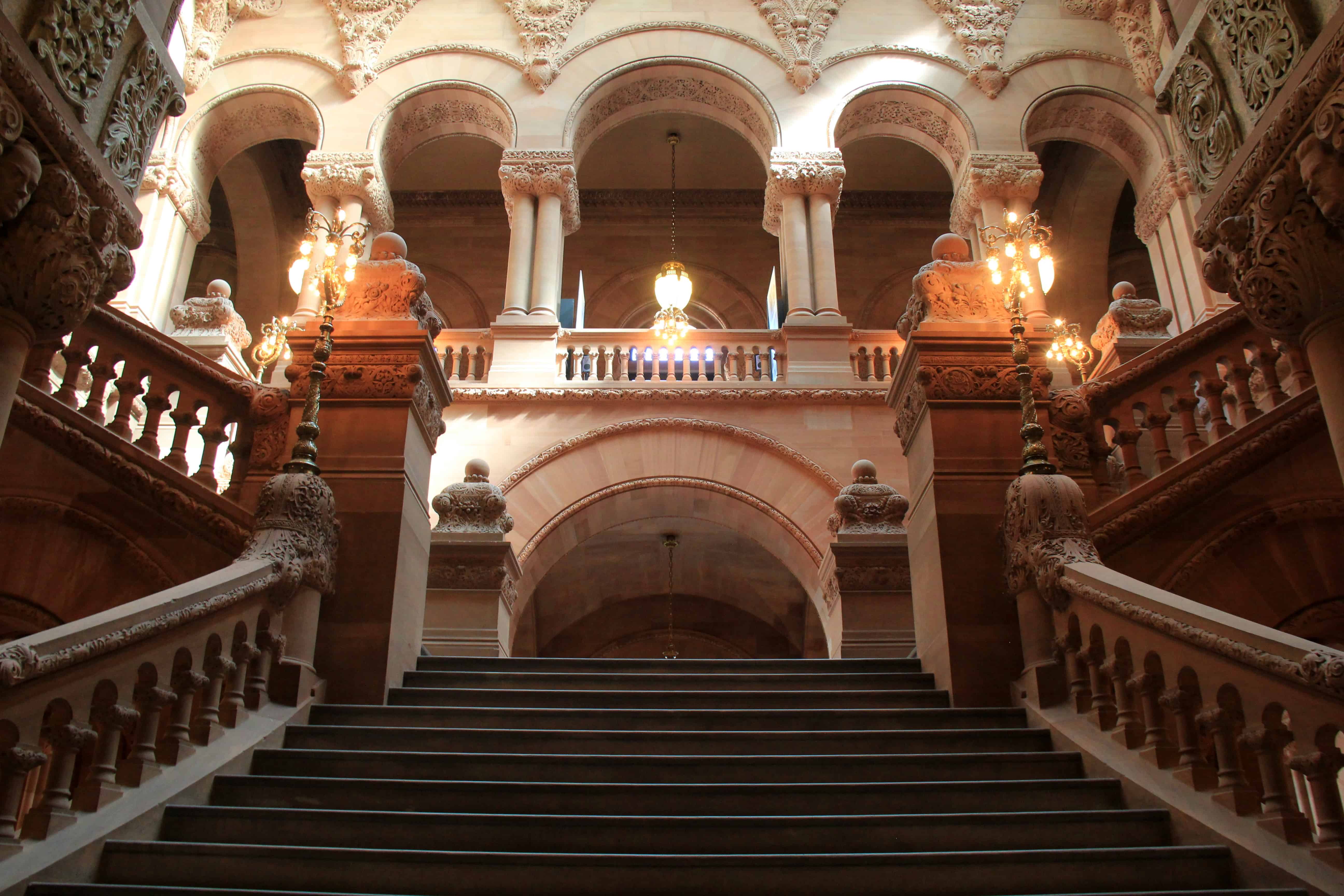 When she spoke about her experience to other guides, she was told there were no ghost sightings on that side of the building, at least not that they were aware of – only on the other. Much later, while pouring over historic newspaper articles, they learned that, indeed there was a death, exactly where she’d stood. It was suspected that the tour guide had most likely seen the spirit of a fruit vendor who’d worked nearby. While the State Capitol’s construction was in progress, this man entered the building after dark. He was in total despair over the state of his finances and had decided to jump from the fourth floor, plummeting to the unforgiving stones in the courtyard below. His injuries were catastrophic and he passed away.

In 1878, a worker fell from scaffolding while plastering the ceilings in The State Assembly room. It was a Saturday night. He lay there, in pain, and was found on Monday morning. He was still alive – though barely. The doctors tried valiantly to save him, but he died two days later. Some ghost experts believe that a person whose life’s been cut short – like his – are more likely to haunt a place from the afterlife.

My tour guide shows me pictures of two murals. They are truly exquisite. Created by William Morris Hunt, they were once prominently displayed on the upper walls of the Assembly Chamber. He’d painstakingly etched them, directly onto the face of sandstone. I cannot imagine how proud he must have been when he stepped away, to see they were complete. After 10 short years, due to structural damage in the building, the ceilings had to be lowered substantially. Both ‘ The Flight of Night ‘ and ‘ Discover ‘ were covered up in the process.

When a devastating fire broke out in the Capitol Building some 22 years later, the murals were completely destroyed. Rumor has it that Hunt was distraught, became despondent after learning that his masterpieces could not be salvaged and fell into a deep depression he could not shake free from. 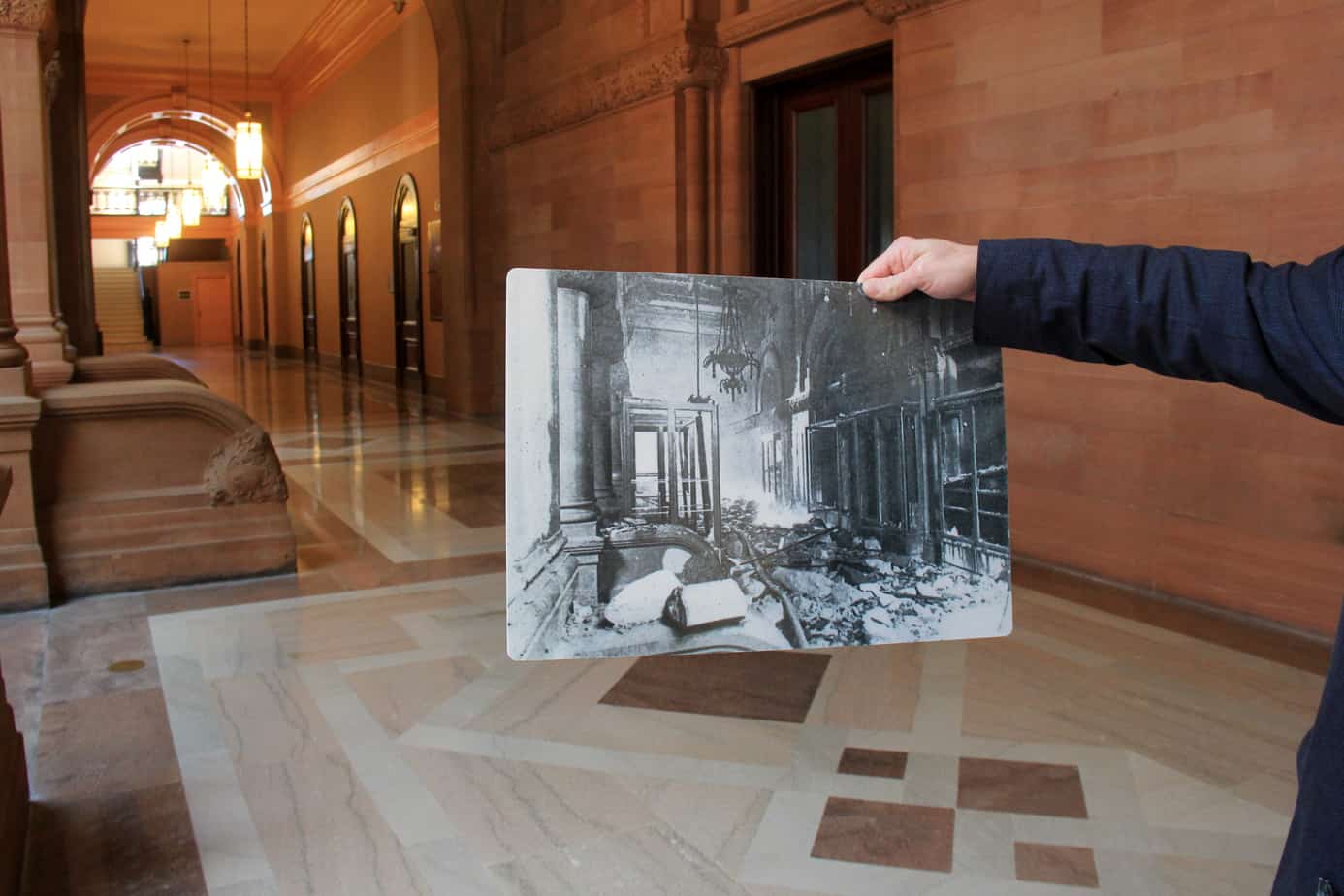 Some speculate the artist committed suicide, after the discovery of his bloated body among the weeds of a New Hampshire pond in 1879. Other visitors state they feel his angry presence in the assembly chamber, hear a rattling of keys, or feel as if they’ve walked through cold spots – a sure sign of a ghostly encounter to many.

When the ravenous flames broke out in the early morning hours of March 29th, 1911, the beloved watchman, Samuel Abbott, then in his 78th year, perished in the blaze. He was the only one who died, succumbing to smoke inhalation and flames while performing his nightly walks throughout the nooks and crannies of the building. He was seen flinging windows open before what must have been a terrible demise. People believe he was attempting to save precious records from what was part of the Education Center section of the building.

Why Some Records Saved and Not Others?

That same fire also claimed 270,000 original early American documents, located in both The Assembly Library and The New York State Library inside the building. It was a loss that was nearly impossible to recover from.

Surprisingly, even though numerous objects were destroyed in the Capitol Building’s Native American Collection, which was quite extensive, other sacred artifacts were untouched, right down to the hair on their medicine masks. No one can explain why these items were spared. Except that they were. And it makes you wonder – does the paranormal exist here?

Supposedly, Mr. Abbott’s spirit remains in The State Capitol. People hear his footsteps along the darkened halls, or his hands, sometimes turning a doorknob to be sure it’s locked up tight for the night. Others see a blurred figure pass them on the 4th floor, where his remains were discovered, once the tragic fire was under control and extinguished. 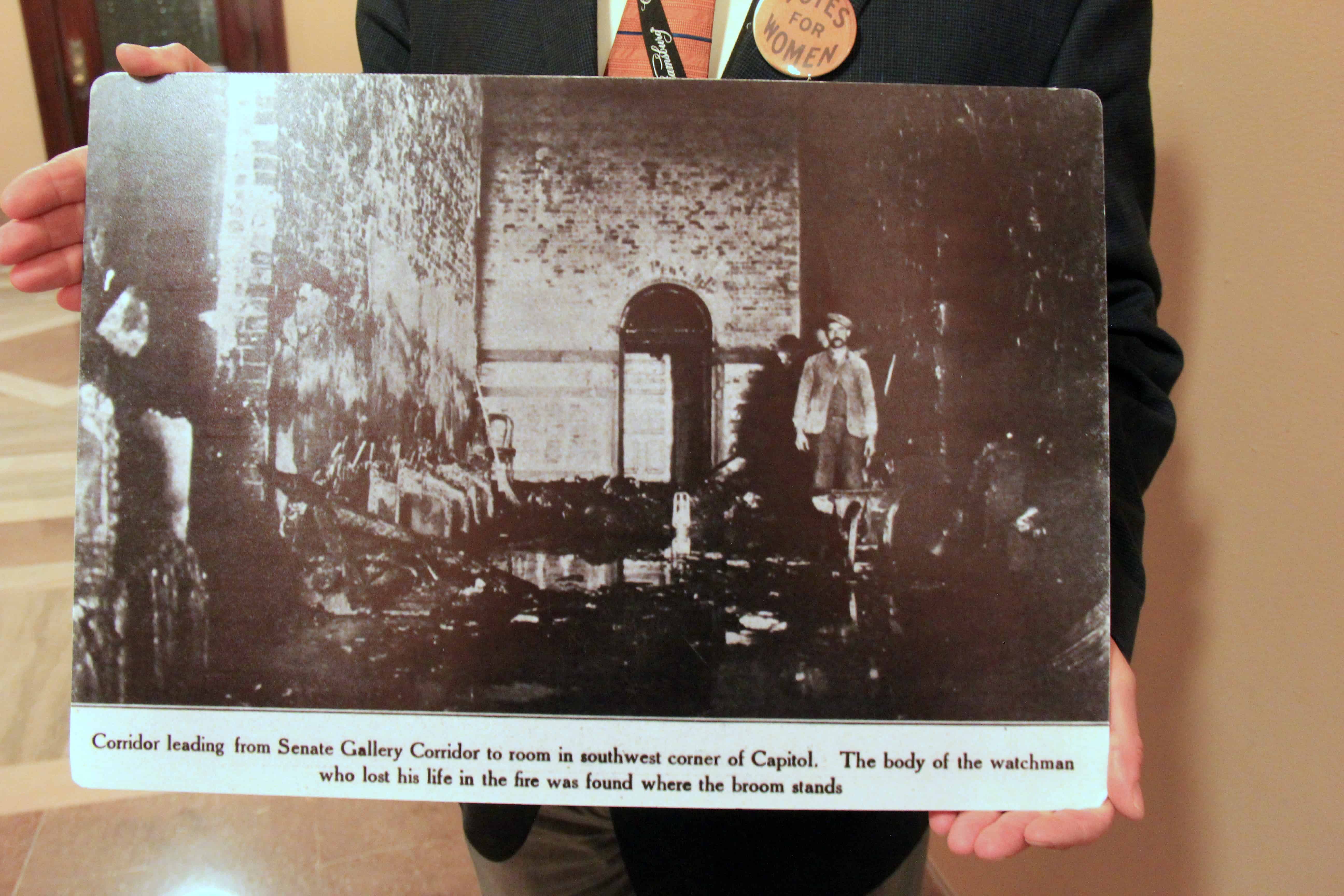 I believe Mr. Abbott is the ghost we run into that warm spring day in May. The tour guide leads me into the room above the Assembly Chamber. We walk through a door that he has to unlock, as it’s not normally open to the general public.

Running into Ghosts at the New York State Capitol

We stand together, looking out over the balcony. I’m busy learning about visits here from President Abraham Lincoln, John Wilkes Booth, other statesmen and their wives. We speak in hushed voices and he is more than willing to answer any question I ask. Believe me, I have plenty. 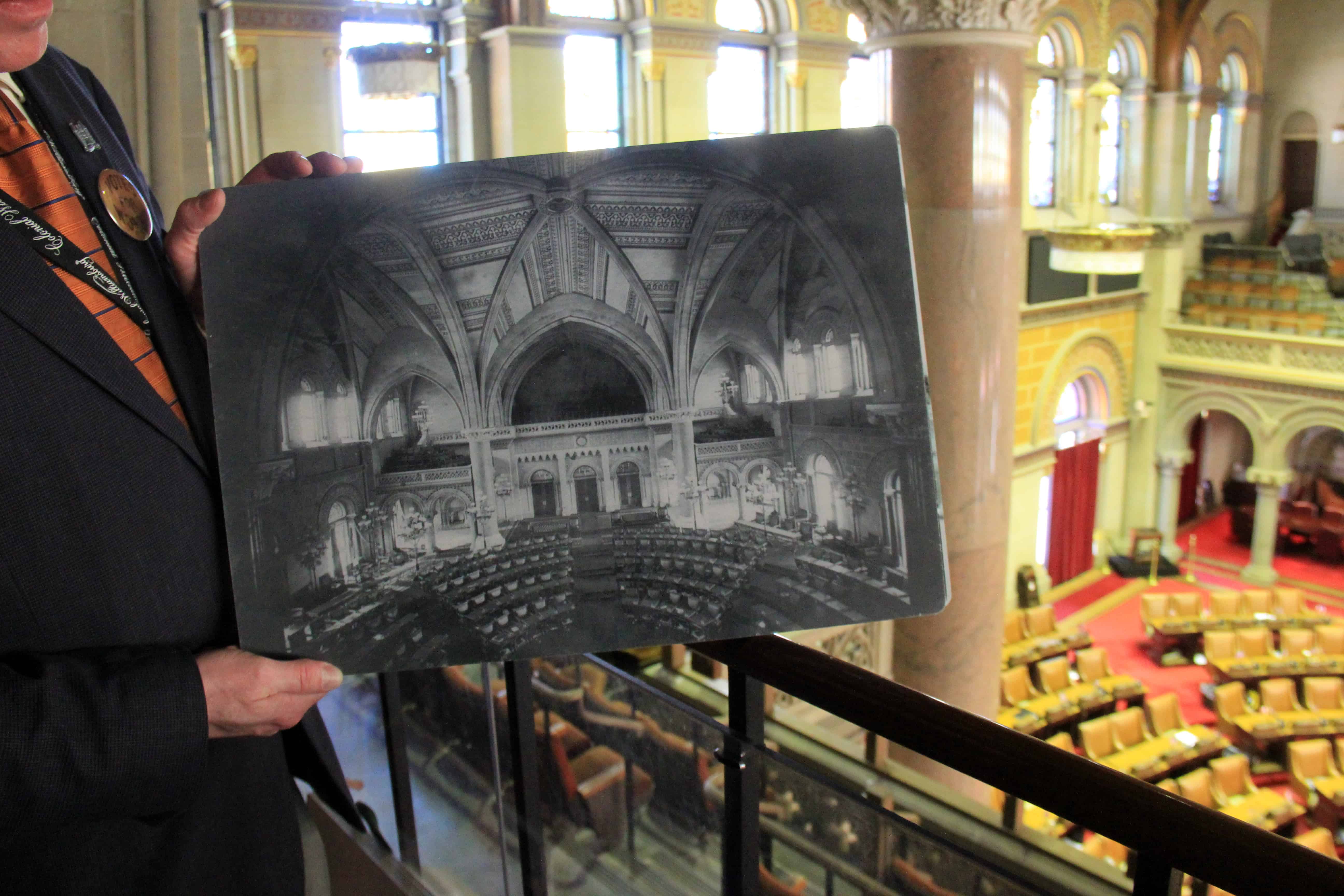 All of a sudden, I hear a loud rattling of keys. It seems like a lot of them, clanging together as someone struggles to open the door behind us. I watch the tour guide turn. He stops talking mid-sentence and whips his head around, startled. The noise stops abruptly.

We look at each other. “Did you hear that?” he asks me.

“I thought another tour guide was coming in. But, no one is out there. ”

I smile a little. “Well, I wouldn’t say that. Maybe it’s Mr. Abbott, closing up for the night.” When he begins talking again, I discreetly lean on the banister in front of me. Was that the noise we heard? Had the banister loosened up over time and made the noise when I moved against it? Nope, it is solid and unyielding to my touch. Hhhhhhhhmmmmm. 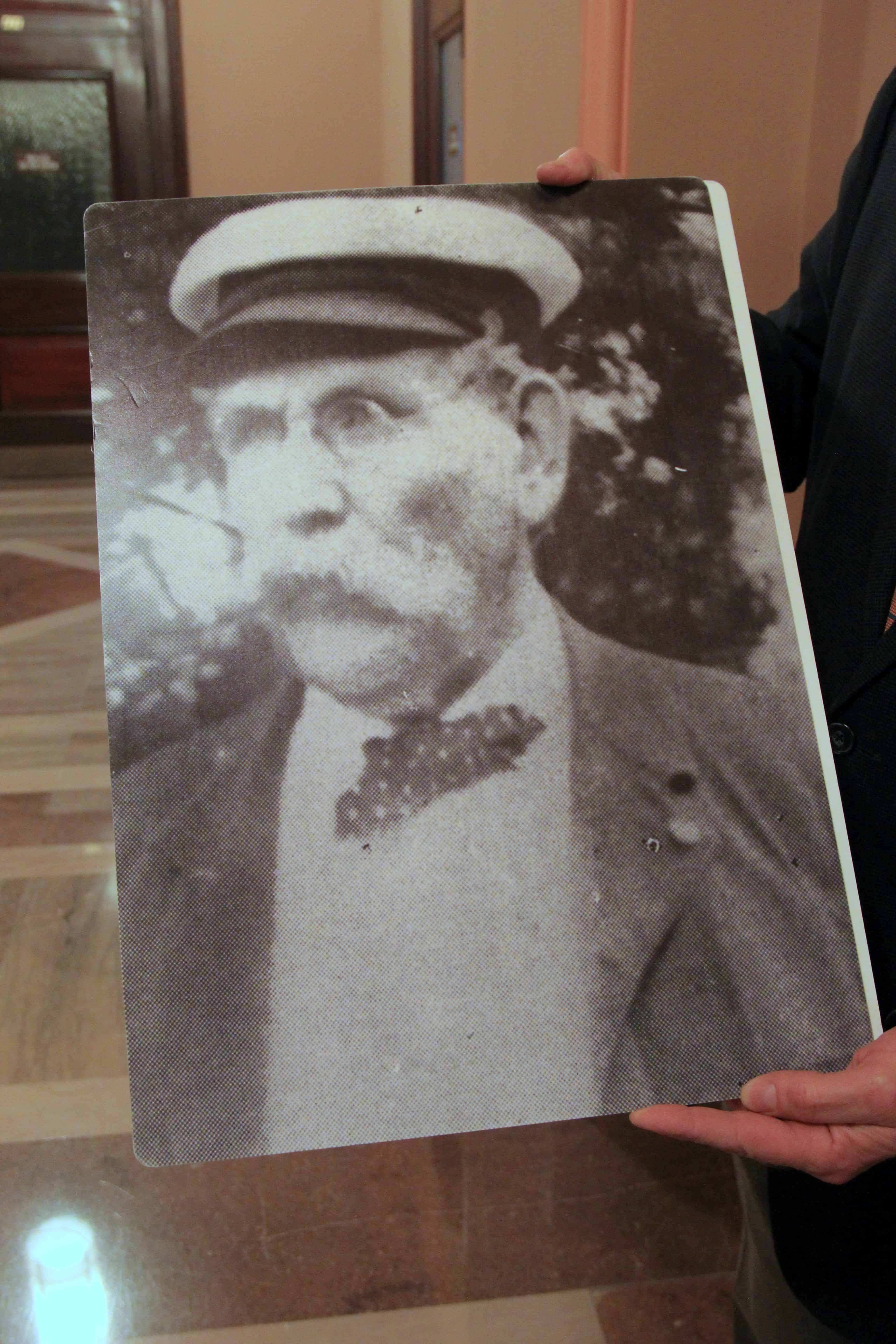 I myself believe in ghosts and hauntings and the un-explainable. I absolutely think that energy can be left behind, long after the person is gone to, well, wherever. Who really knows?

This year, legislation was passed to install and maintain a plaque that would honor the life and death of the night watchman. I like to think Abbott will continue his nightly duties, with a jaunt in his step now, pleased with the recognition of his service.

Thank you, Samuel. Thank you.

See a bit of the Haunted Capitol tour on youtube.