Delta Air Lines’ (NYSE: DAL) hub at Seattle-Tacoma International Airport will continue to grow next spring with the launch of four daily flights from Seattle to Orange County John Wayne Airport beginning May 1, 2016.

“Orange County is one of the top destinations from Seattle and fills a critical component of our corporate and leisure travel demand,” said Mike Medeiros, Delta’s Vice President – Seattle. “With 10 nonstop destinations launching between November and next spring, our 3,000 Seattle-area employees look forward to serving our customers from Orange County to Shanghai and more than 30 destinations in between.” 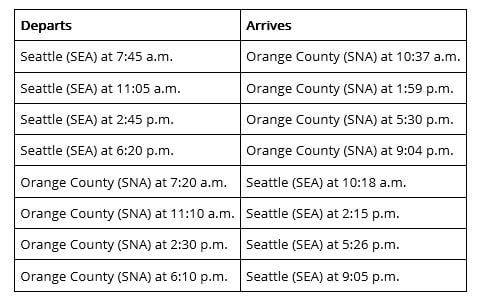 Every Delta flight from Seattle features jet service with Delta One/First Class and Delta Comfort+ seating. All customers have access to free entertainment options via Delta Studio and Wi-Fi service on every domestic aircraft operating in the contiguous U.S. Delta is the only carrier to offer full flat-bed seats with direct aisle access in Delta One on every long-haul international flight from Seattle. The airline has also invested $15 million in its facilities at Sea-Tac, including its Delta Sky Club and lobby renovations, Sky Priority services, new gate area power recharging stations, expanded ticket counters and enhancements to the international arrivals area.

Delta Air Lines serves more than 170 million customers each year. Delta was named to FORTUNE magazine’s top 50 World’s Most Admired Companies in addition to being named the most admired airline for the fourth time in five years. Additionally, Delta has ranked No.1 in the Business Travel News Annual Airline survey for four consecutive years, a first for any airline. With an industry-leading global network, Delta and the Delta Connection carriers offer service to 318 destinations in 58 countries on six continents.

Headquartered in Atlanta, Delta employs nearly 80,000 employees worldwide and operates a mainline fleet of more than 800 aircraft. The airline is a founding member of the SkyTeam global alliance and participates in the industry’s leading trans-Atlantic joint venture with Air France-KLM and Alitalia as well as a joint venture with Virgin Atlantic.

Trouble booking a flight on Southwest airlines from outside the United States?

This is a topic matter we’ve been curious to research further for a few years now. If you try to