When my Australian friends said they would be in Split, Croatia, before the start of their sailing holiday, they said, “Come and see us.”

I looked at my schedule and realized I could only go one for one night. I thought what the heck, I’ll go for dinner.

London to Split Croatia – Getting There

I booked flights on EasyJet, one of the budget airlines that flies out of London. The price for a return ticket, booked four weeks beforehand, was £180, about $232. The flight times were perfect too, leaving around midday and returning late afternoon the next day. It gave me exactly 24 hours in Split.

I left London at 1pm and arrived in the hub of the Adriatic 2 ½ hours later at 4:30pm local time. Croatia is one hour ahead of the UK. After deliberating whether to take the airport shuttle into town, a driver named Davor convinced me to take a taxi. It turned out to be his taxi. It was £30, $40, versus about £5, $6.50, but I was only going to be there for one day, right. And what a pleasant man. 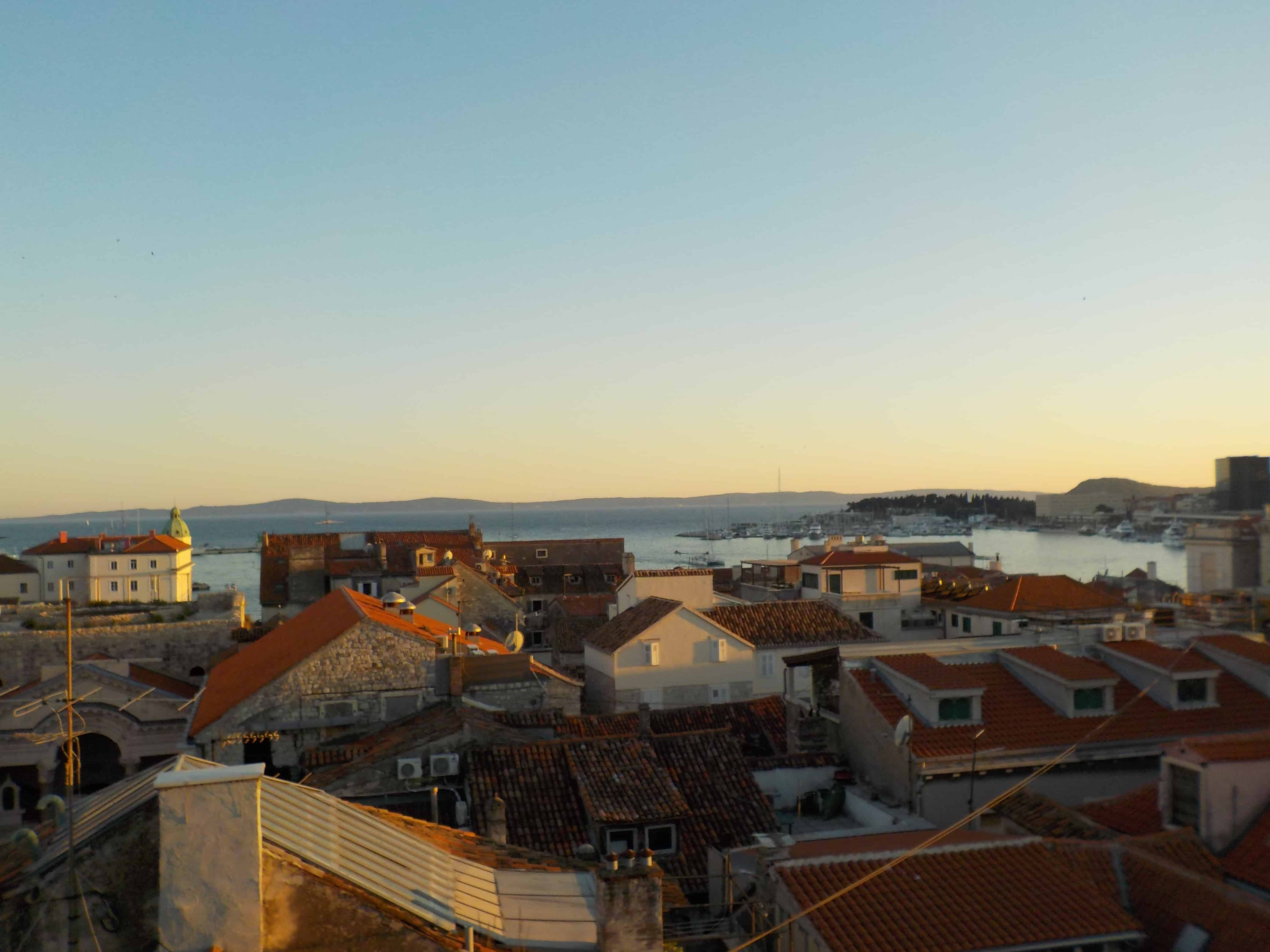 His English was pretty good and he gave me the low-down on Split on the way into the city. Split has an interesting climate he told me. The difference in temperature by the sea and the mountains which are only about 10 miles apart, can vary as much at 10c degrees. When I got to the hotel, Davor gave me his card, agreed to pick me up at the same spot at 3pm the next day to take me back to the airport. And, he said, he would charge me a cheaper price for the return journey.

It took about a half an hour to get to Villa Spalatini from the airport. It’s a pleasant hotel, clean, light and very reasonable at £50 a night, about $65. It’s a short walk, about 8 minutes, into the heart of the old town where I was going to meet my friends Victoria and her husband Rob. I met them in Narodni trg – ‘Pjaca’, just outside the walled old town, where they were already having drinks at the No Stress Restaurant. 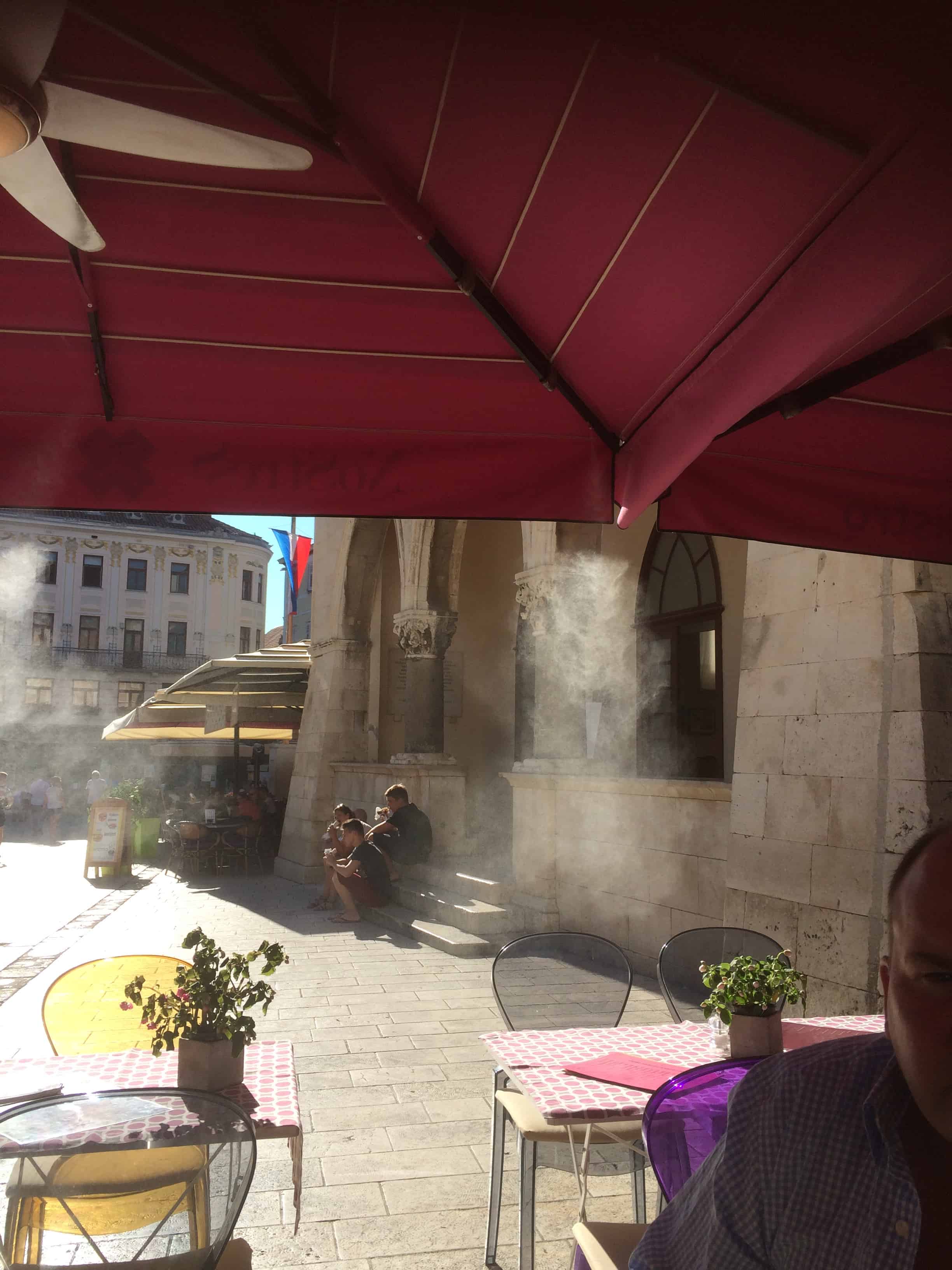 No stress was right. There was cold beer, wine and intermittent bursts of mist flowing from pipes in the awnings to keep the 30c (86f) heat at bay.

From there, we went to the Diocletian Apartments to meet another friend, Fiona, who I hadn’t seen in 31 years, and her husband and two children to have pre-dinner cocktails. There were lots of stairs to climb to get to their room and even more to get to the roof terrace overlooking the Adriatic and the city’s famous bell tower. What a view overlooking Diocletian’s Palace. 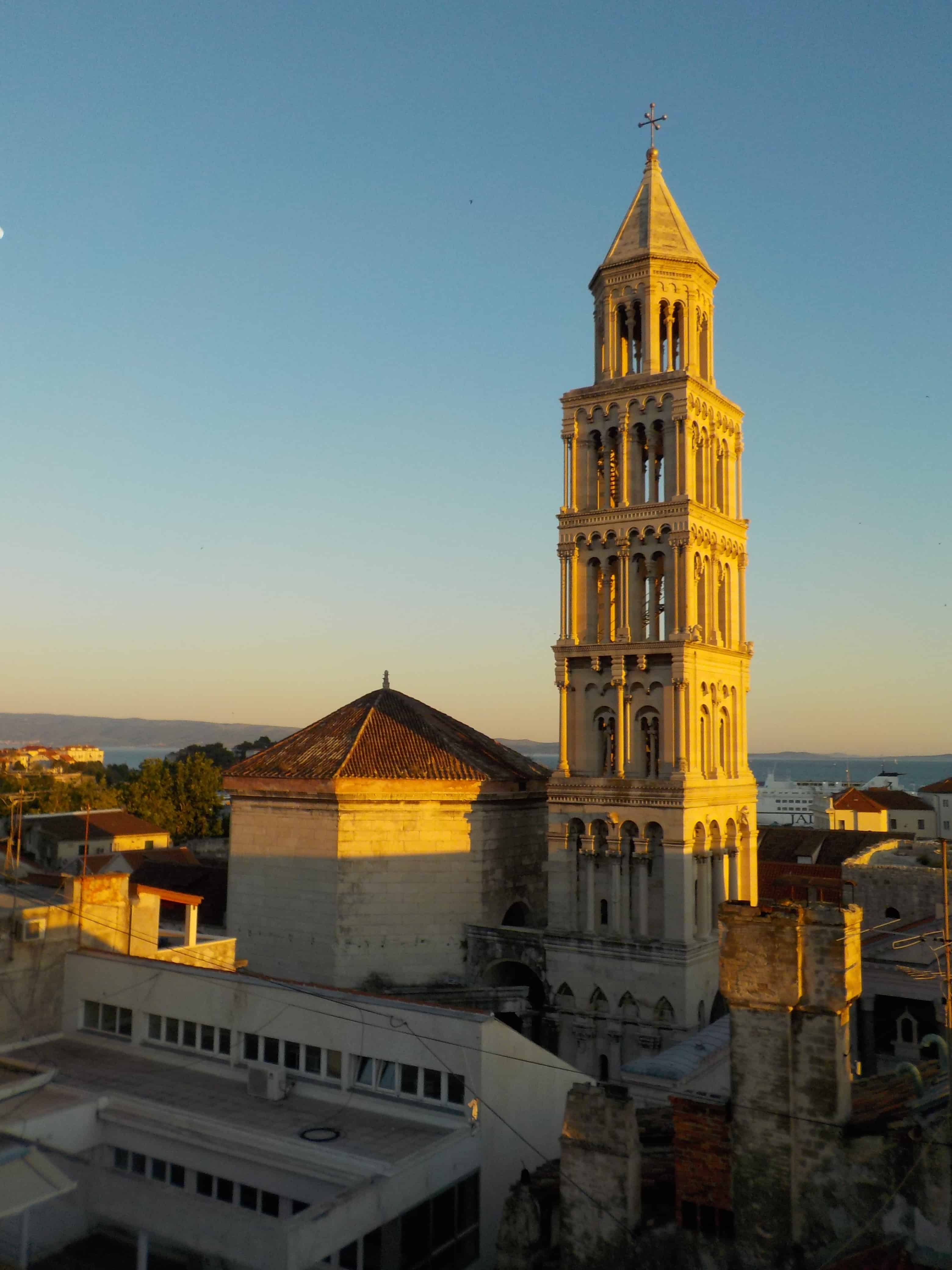 As we drank local beer and wine, we could hear various groups singing in the Peristil, the main square, while the sun was starting to set over the sea. None of us wanted to move, but I was there just for dinner. Right, on we went. We found a place called Konoba Korta, again in the old town where the nine of us dug into local cuisine. The hit of the night was the tuna steak with gnocchi in tomato sauce. They even had vegetarian dishes on offer. After a delicious dinner the adults went for a nightcap, an Aperol Spritz, at one of the many busy bars while the kids went their own way, clubbing I suppose. 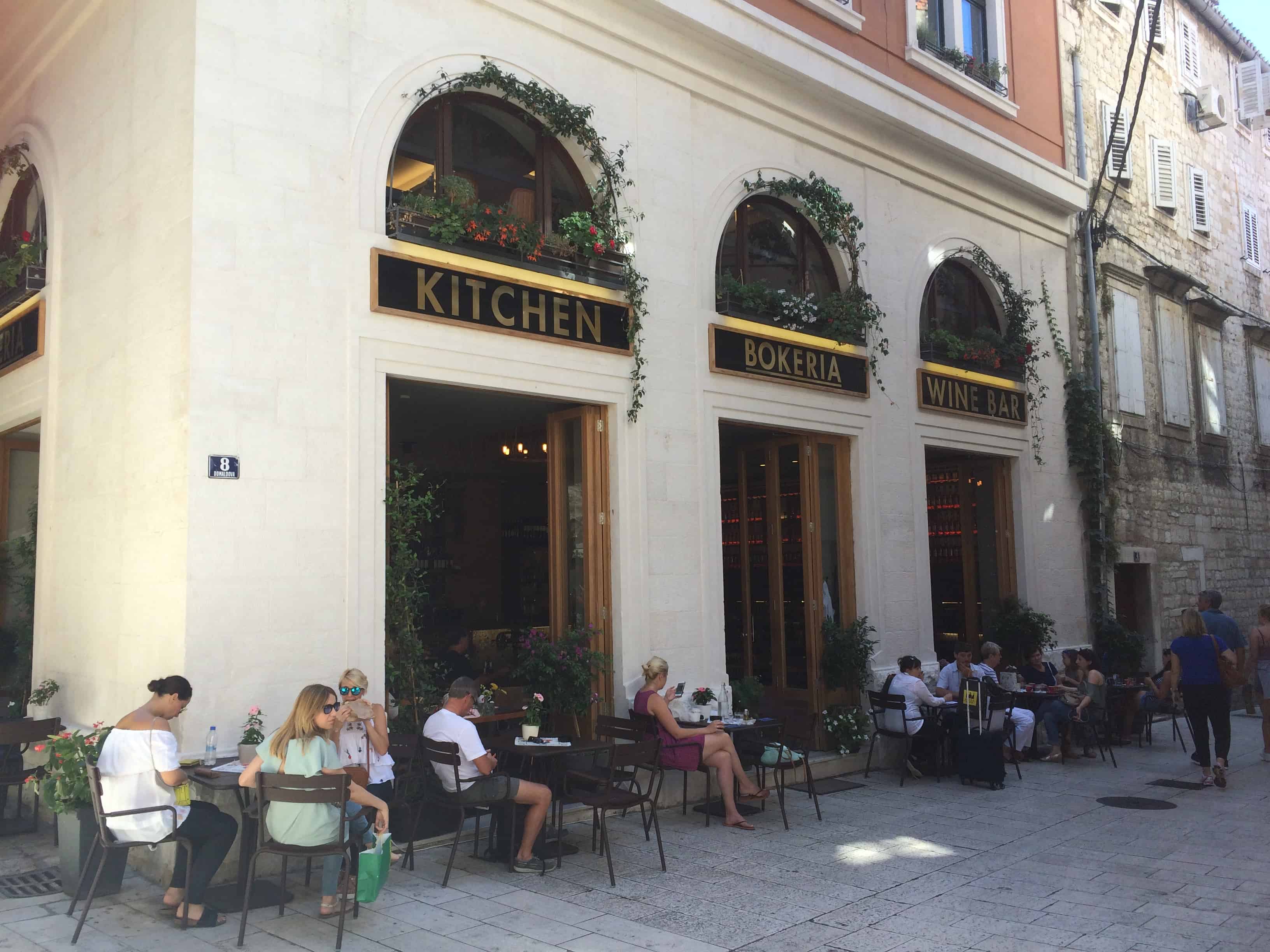 After the drink, it was back to my hotel. Well, I did stop at the Bokeria Kitchen and Wine Bar for just one more delicious glass of good Croatian white wine. That helped me go right to sleep after working a night shift the previous night and only catching a two hour nap on the plane.

The next morning, after a bit of lie in, I met my friends back in the Peristil to decide what we were going to do for the day. They had just climbed the Bell Tower and needed a bit of a rest. Well, most of them did make it to the top where they had a lovely view. The stairs, they said, were a bit high near the top and were mesh-like so you could see below you. 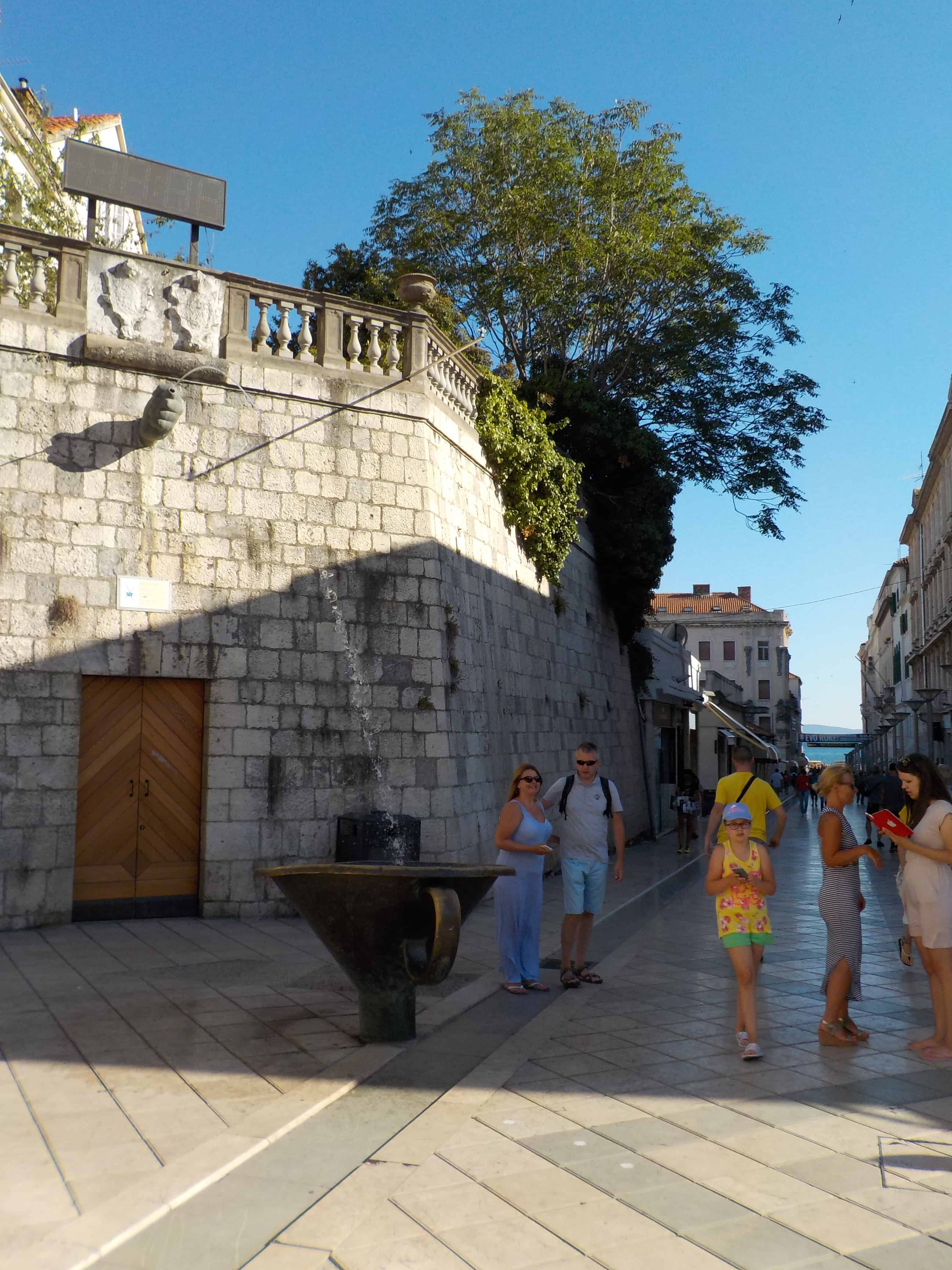 Victoria said vertigo started to set in, so she stopped. After a bit of people watching and some getting their pictures taken with the handsome Roman guards, we ended up back at No Stress for breakfast. It featured a great breakfast menu in the late morning. Menu items included a triple egg and cheese omelette and a ham and cucumber frittata. Delicious.

Then, Victoria and I did a bit of walking around the tiny, cobblestone streets of the old town. We got in some window shopping before heading back to her hotel in the old town to get ready for the beach. On our way to one of two beaches in the city, we happened to walk past the Peristil at noon. There a ceremony was taking place. A daily ritual during the summer, that includes the emperor being announced to the crowd. 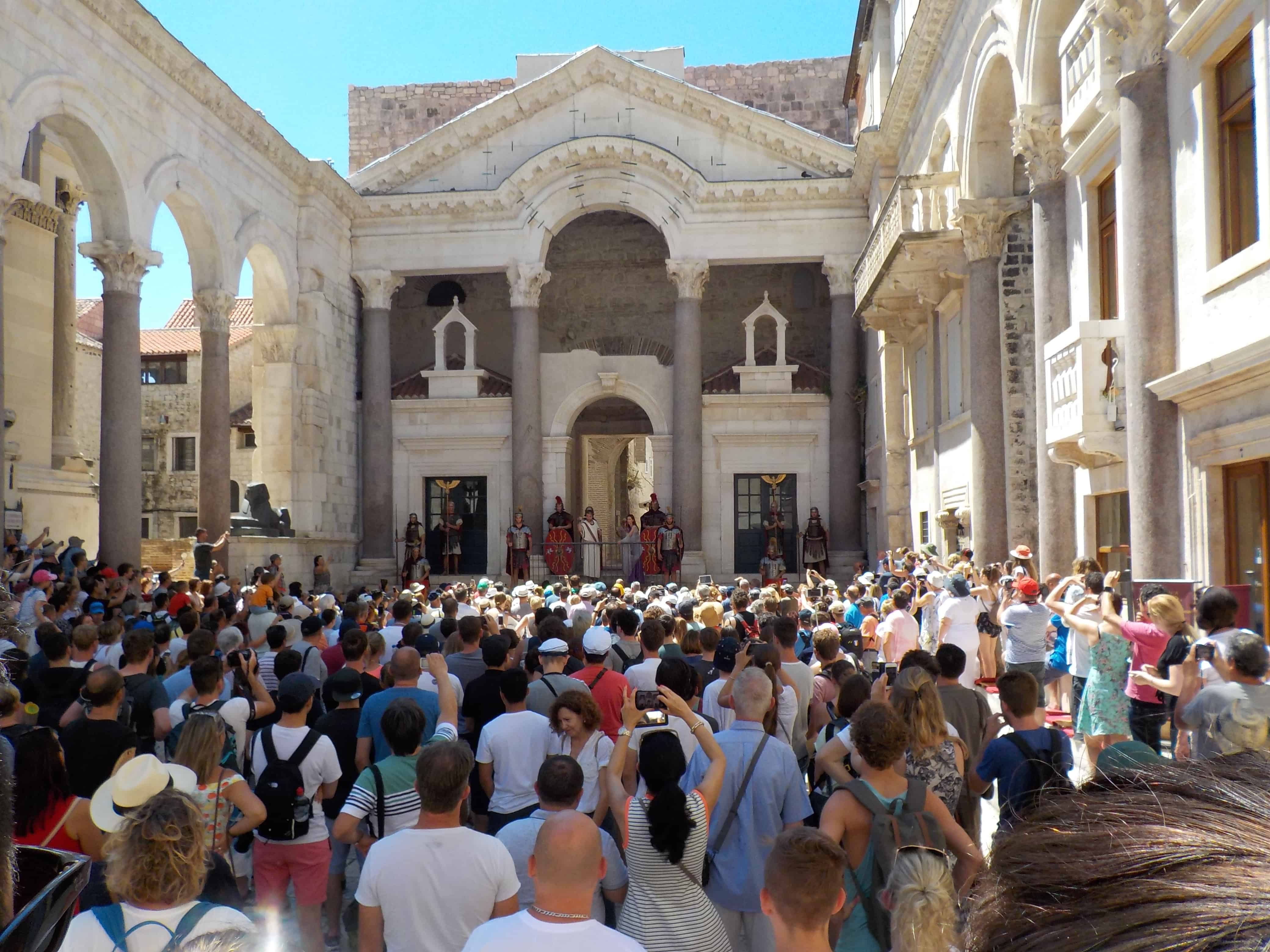 It was quite the traditional ceremony with Roman guards, music, instruments and a comic greeting from the Emperor to us, his subjects. 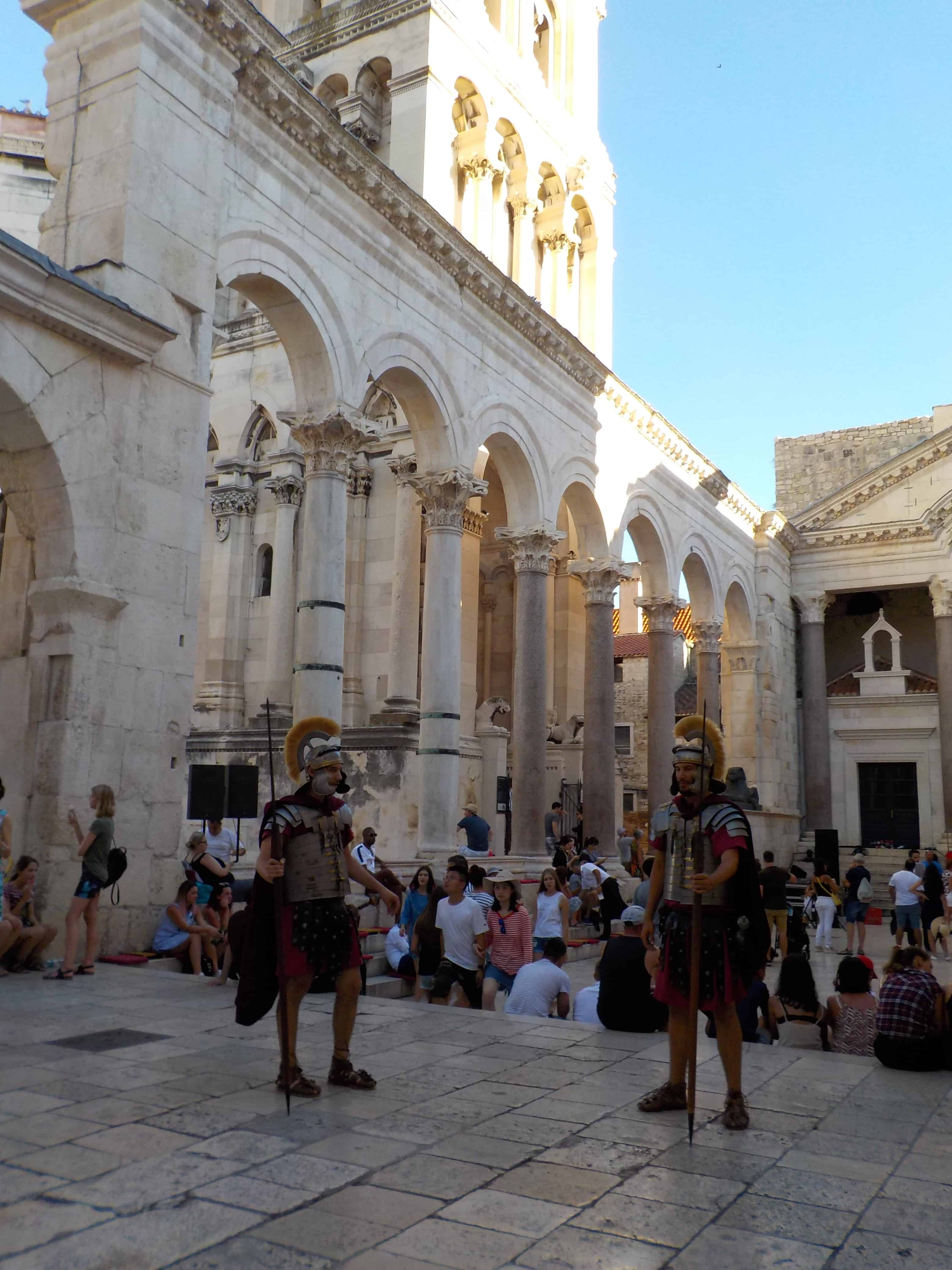 It was almost like the real thing from days gone past.

A Dip in the Adriatic

And no holiday in Croatia, long or short, would be complete in the summer without a swim in the Adriatic. The better beach of the two in Split, Kastelet, was about a 20 minute walk from the centre of town. 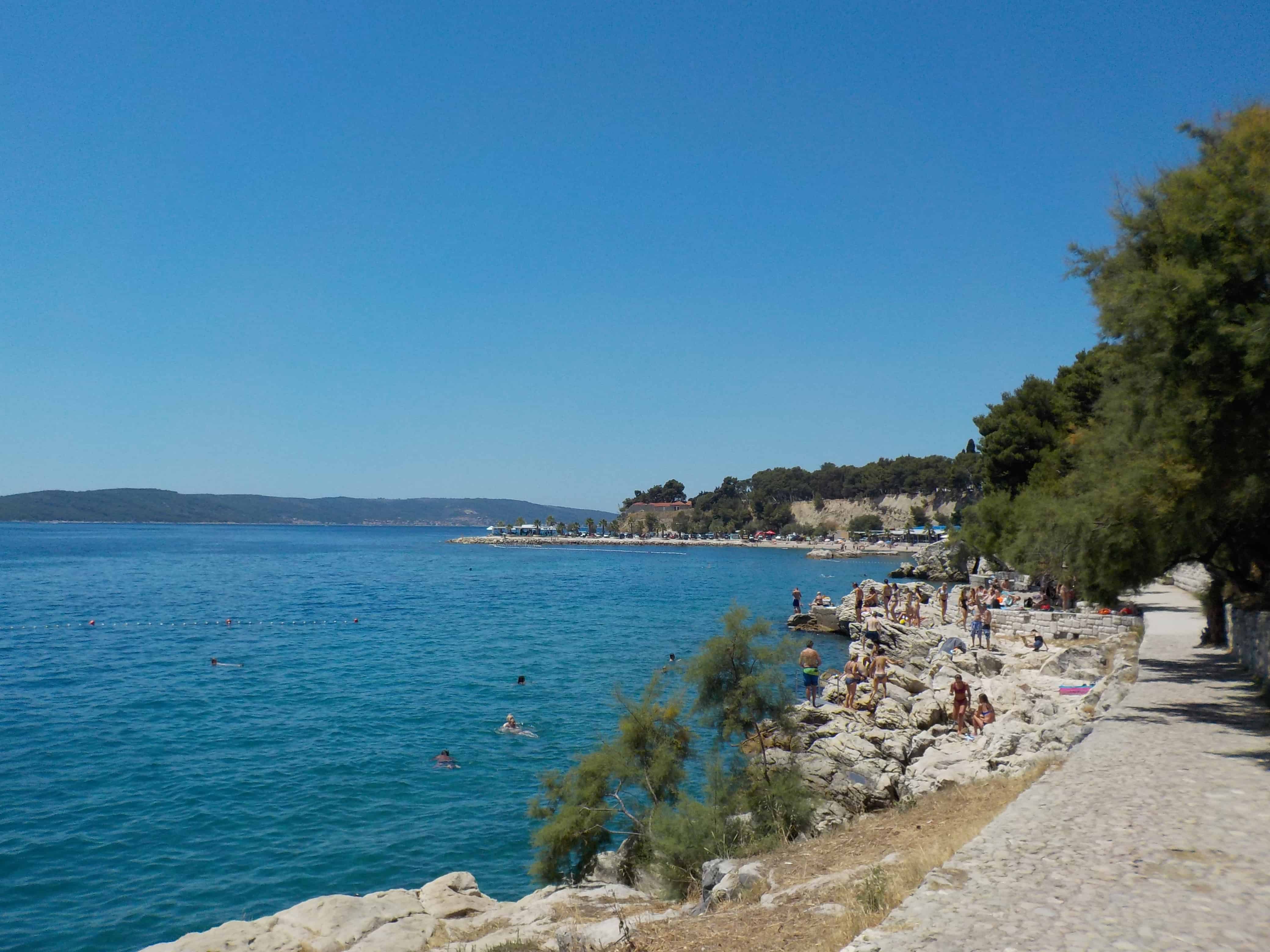 It was a leisurely walk past the marina where there were a few yachts. The walk took us through a park and around a walkway that hugged a hill. The beach was not too bad either, rocky though, not sandy, but the water was ever so warm. It was the perfect way to finish a 24 hour excursion. Well, a couple of local beers called Pan helped too. 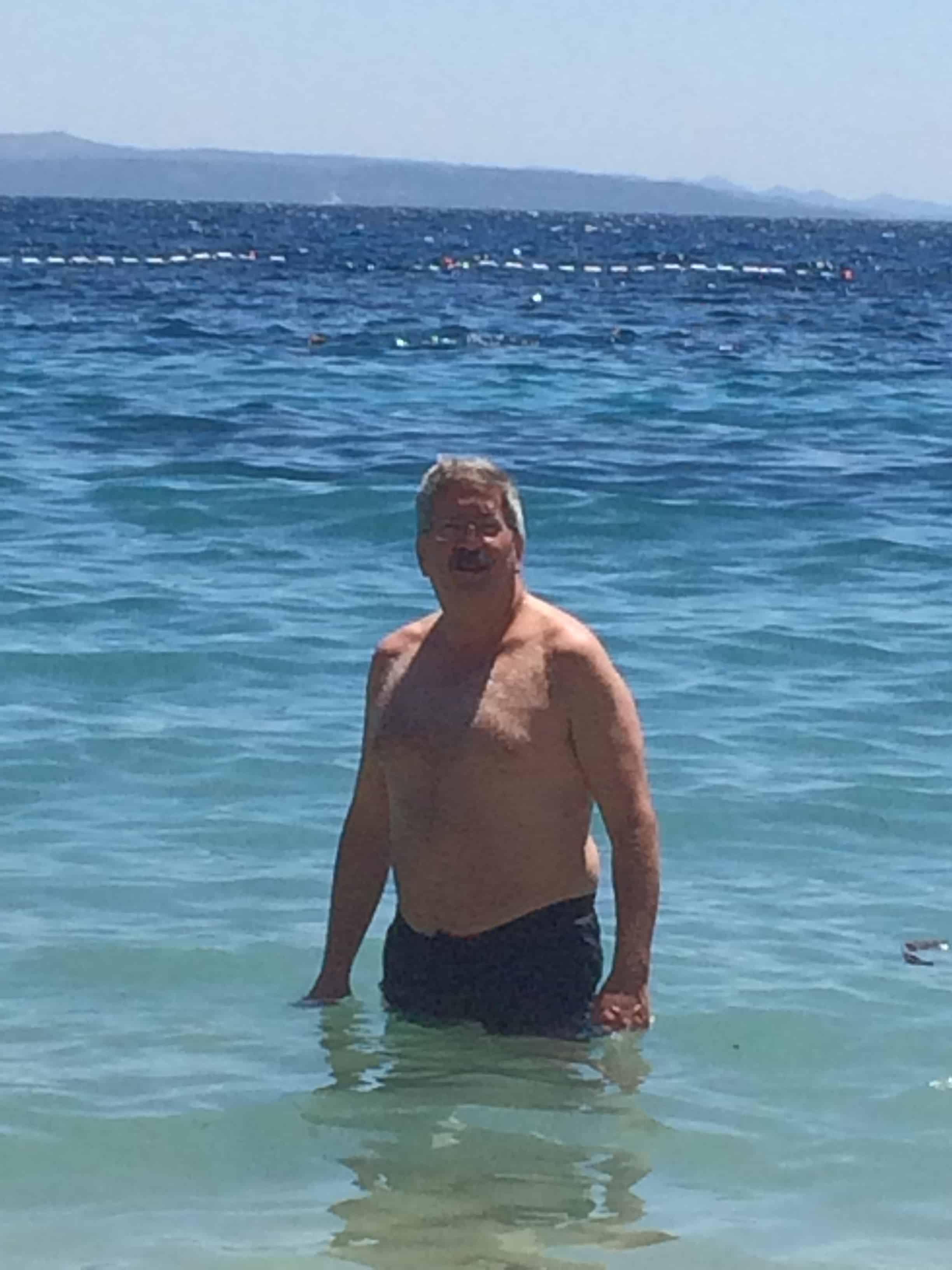 As soon as I got to the beach, I called Davor to pick me up there and not the hotel to give me some additional valuable time in the sea. He gladly agreed to meet me at a famous bar there called Obojena Svjetlost at about 3pm to take me to the airport. Although the beach was a little further out, he said there would be no extra charge. He was happy to stop at an ATM on the way back to the airport so I could get money to pay him. I also picked up a Karlovacko beer, one of the more popular beers in the country.

By 3:40pm I arrived at the airport, and was through customs and security by 3:46pm. I got back to London about four hours later. When I got back to my home that evening, my bathing suit was still wet. It was a fond memory, almost dreamlike, from a very quick and jammed packed 24 hours in Croatia.