If a friend told you they knew of a place where you could soak in dragon’s tears, you’d probably tell them you knew a place where they could see a good doctor. But legend says that that’s just what Sol Duc Hot Springs are, natural springs that are made from the hot tears of dragons who were long ago defeated in a battle over this beautiful valley. Sol Duc is the Quileutae Indian phrase meaning sparkling water. The river runs close by and makes for a chatty companion while walking the trails nearby. But what sets this area apart from the hundreds of gorgeous hiking trails available in the Pacific Northwest, are the hot springs. If one isn’t put off by the sulfur smell, one could spend many happy hours in these pools supposedly formed of those poor unfortunate lamenting dragons. 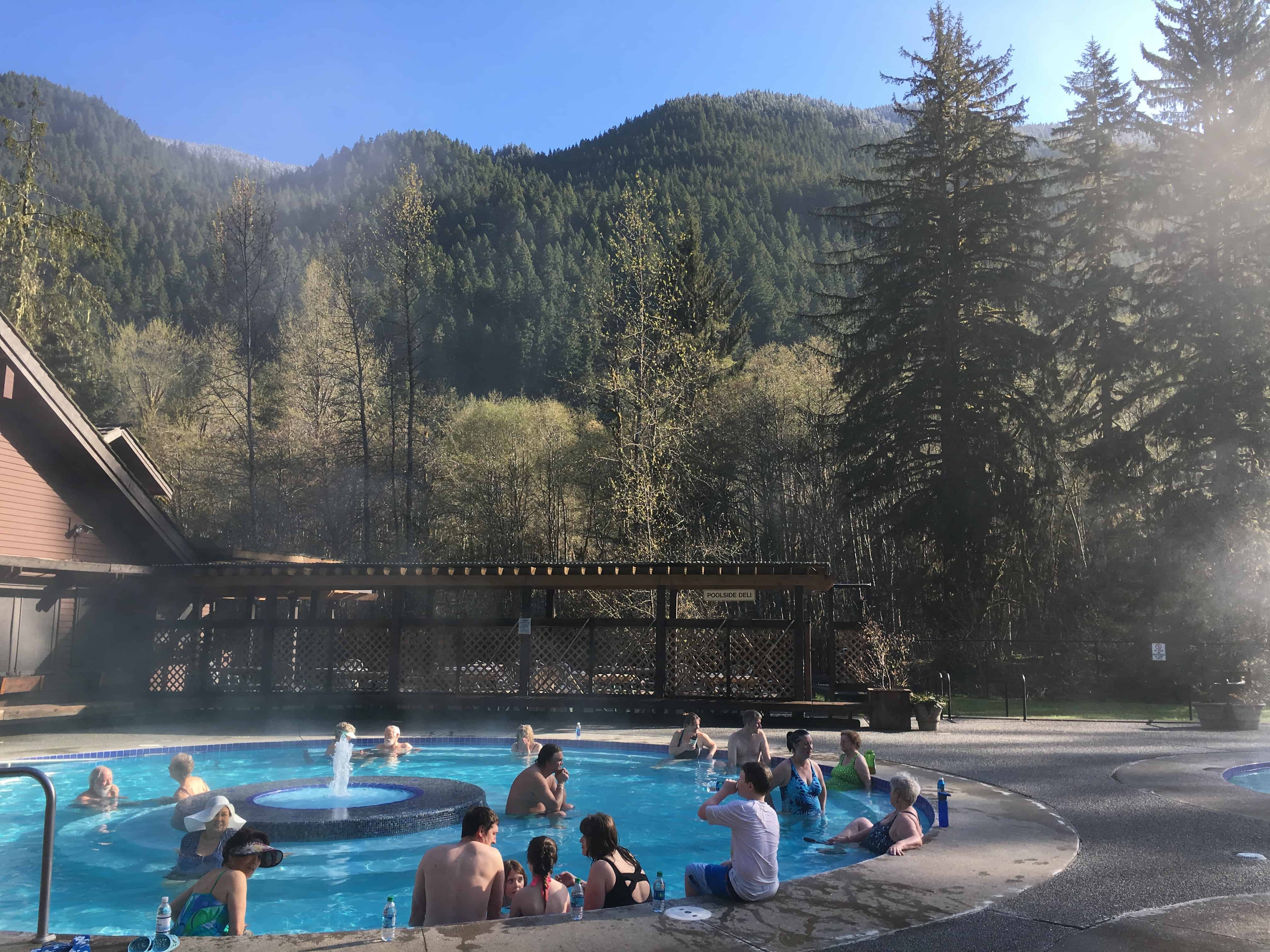 The best time to visit the pools is early in the morning, and as a guest at the resort you are allowed in an hour prior to opening to the public. As our group was staying there, we took advantage of this perk and found ourselves soaking in warm clear waters as the sun rose up over peaks fresh with snow. It was a wonderful way to start the day! 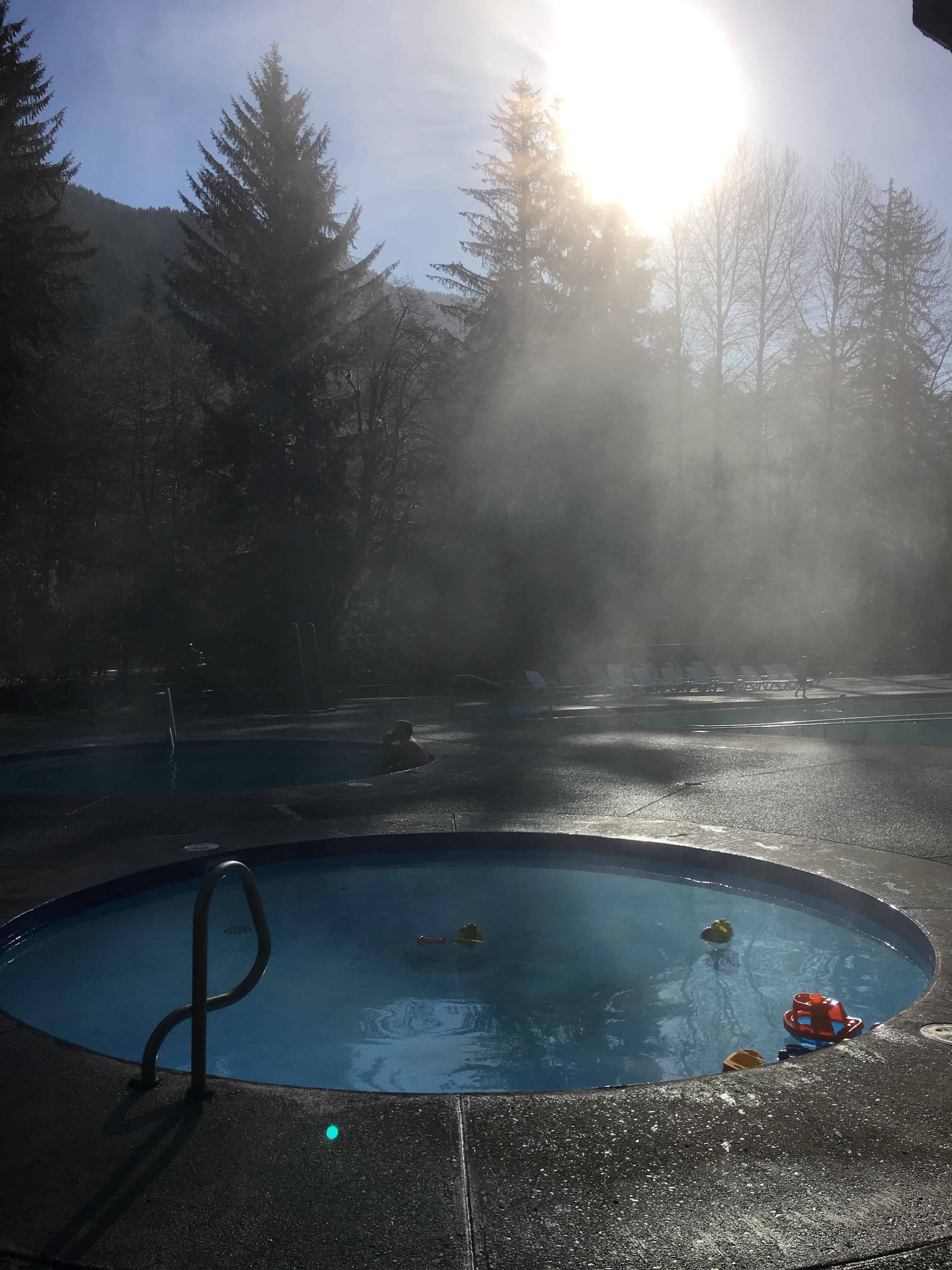 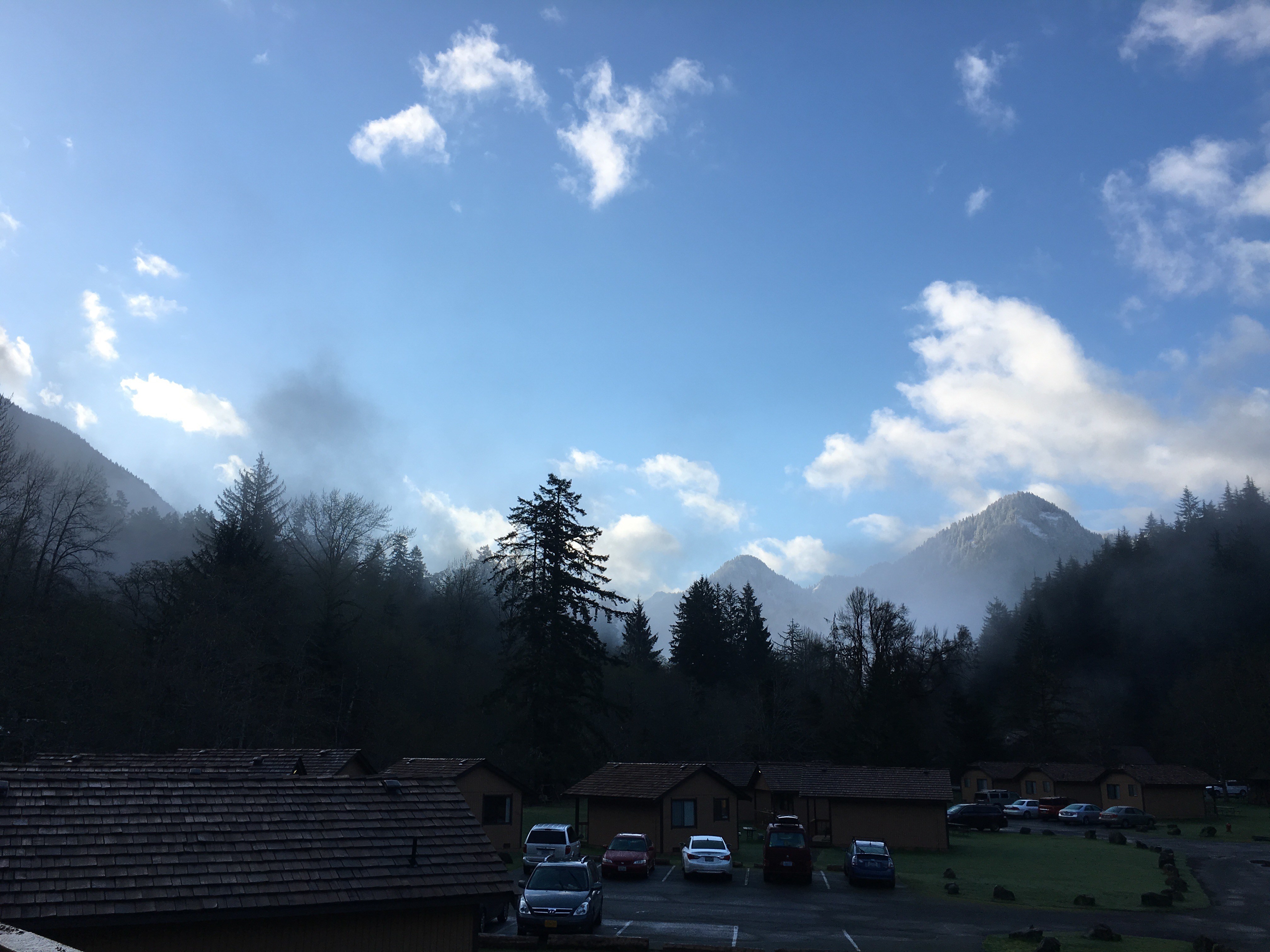 We decided to do the popular Lover’s Lane Loop trail. It is six miles round-trip, but without a lot of steep inclines, it is very doable for most. It is accessible directly from the resort. We were there in mid-April, the beginning of the season. Thus, we were warned that the trail had not yet been cleared. This didn’t prove to be too much of a problem. There were several places where large trees had fallen across the trail and we had to go around, but it just made it more of an adventure. 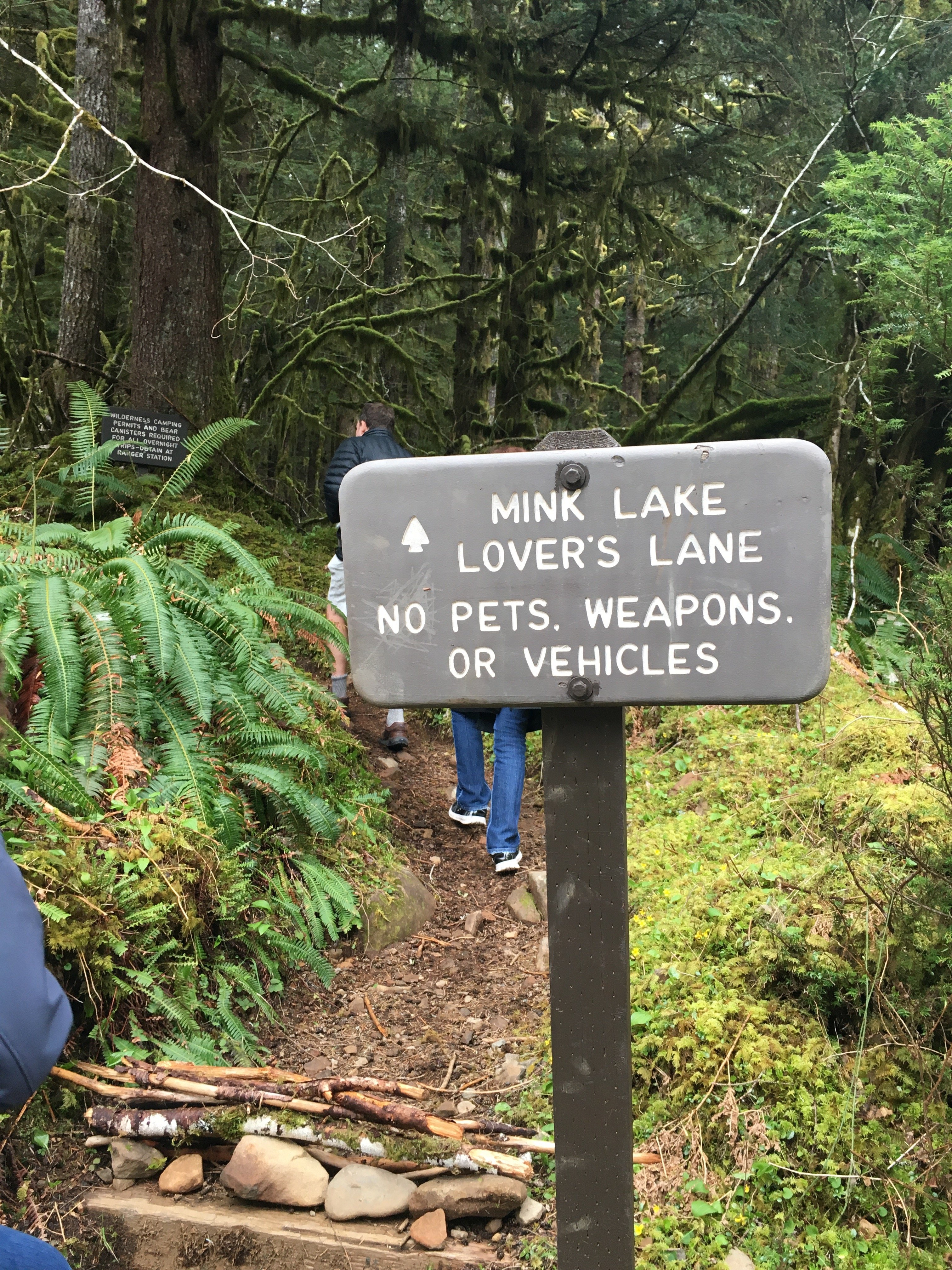 The trail winds its way through old growth forest, the sort that always makes me think ‘it’s sad we have to come out so far from civilization to see this’! We found ourselves following along the Sol Duc River, and crossing it at Sol Duc Falls. The falls were full and pounded over huge boulders smoothed by thousands of years of passing water and laced in places with soft emerald green moss.

When one of our friends set off in the woods to get a view of the falls from a different angle and I yelled, ‘look kids a Sasquatch!’ He didn’t take kindly to being called a big hairy ape man, but it was worth his chagrin. The sound of falling water mixed with the laughter of children is perhaps one of the most beautiful sounds on Earth. 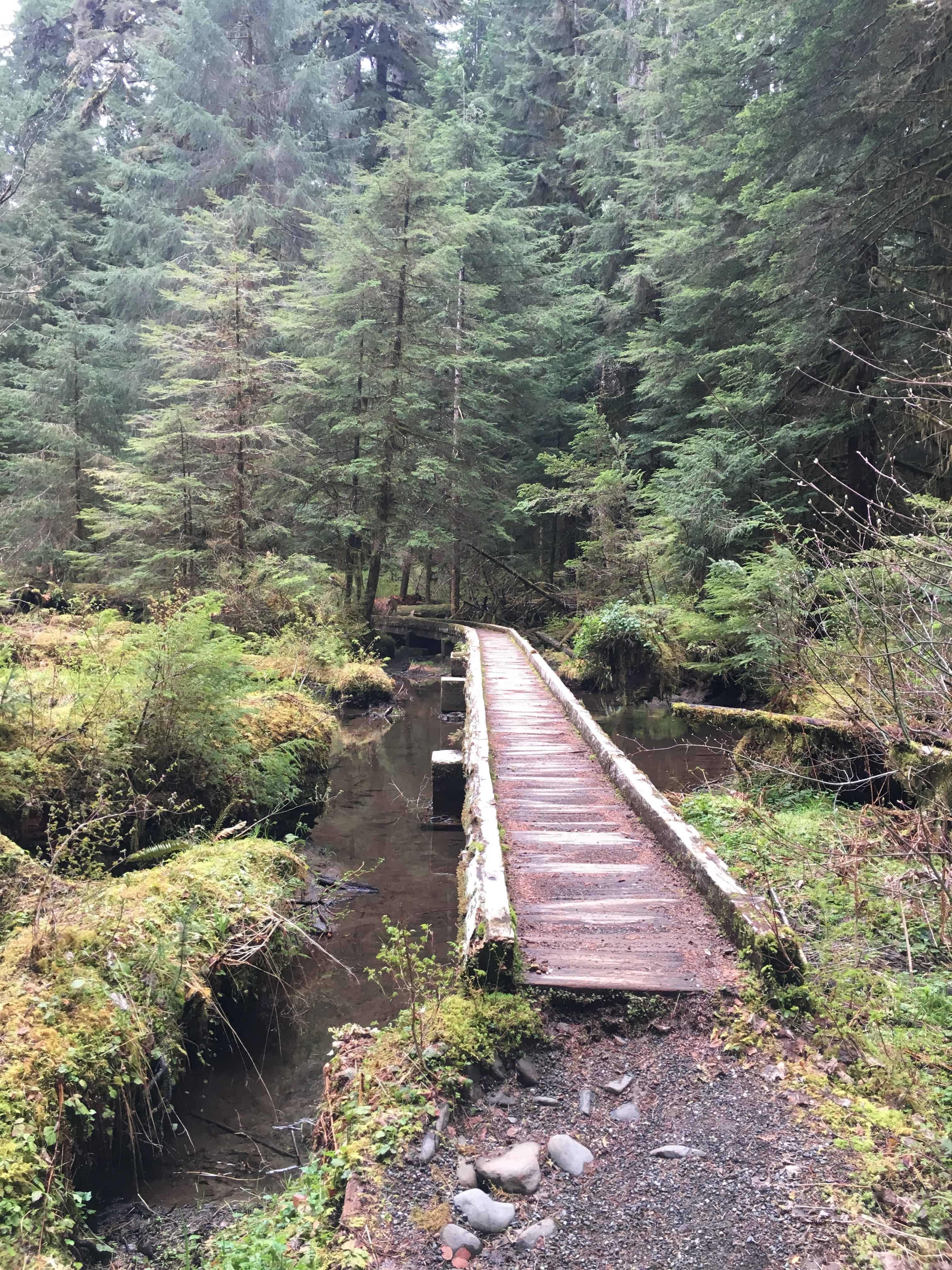 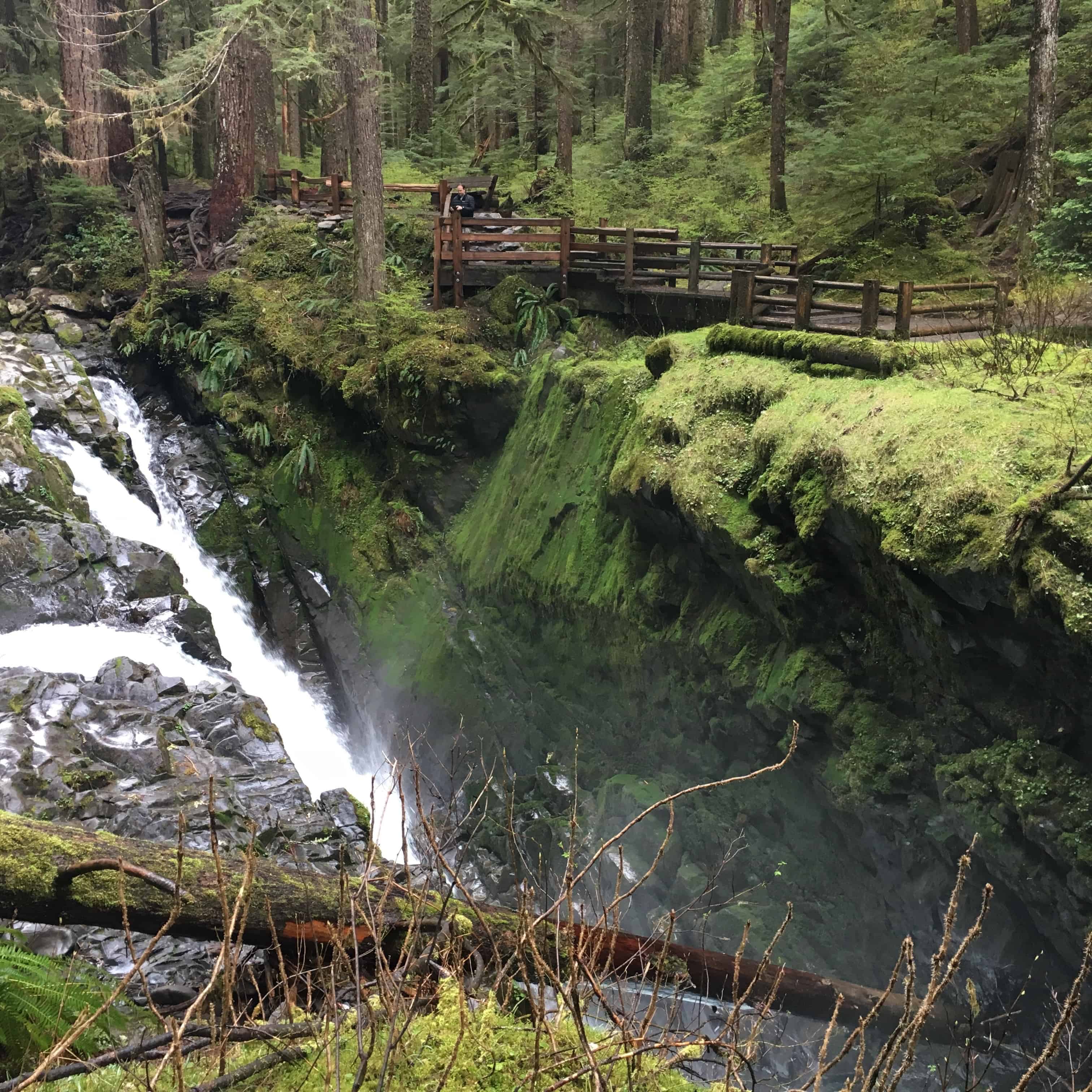 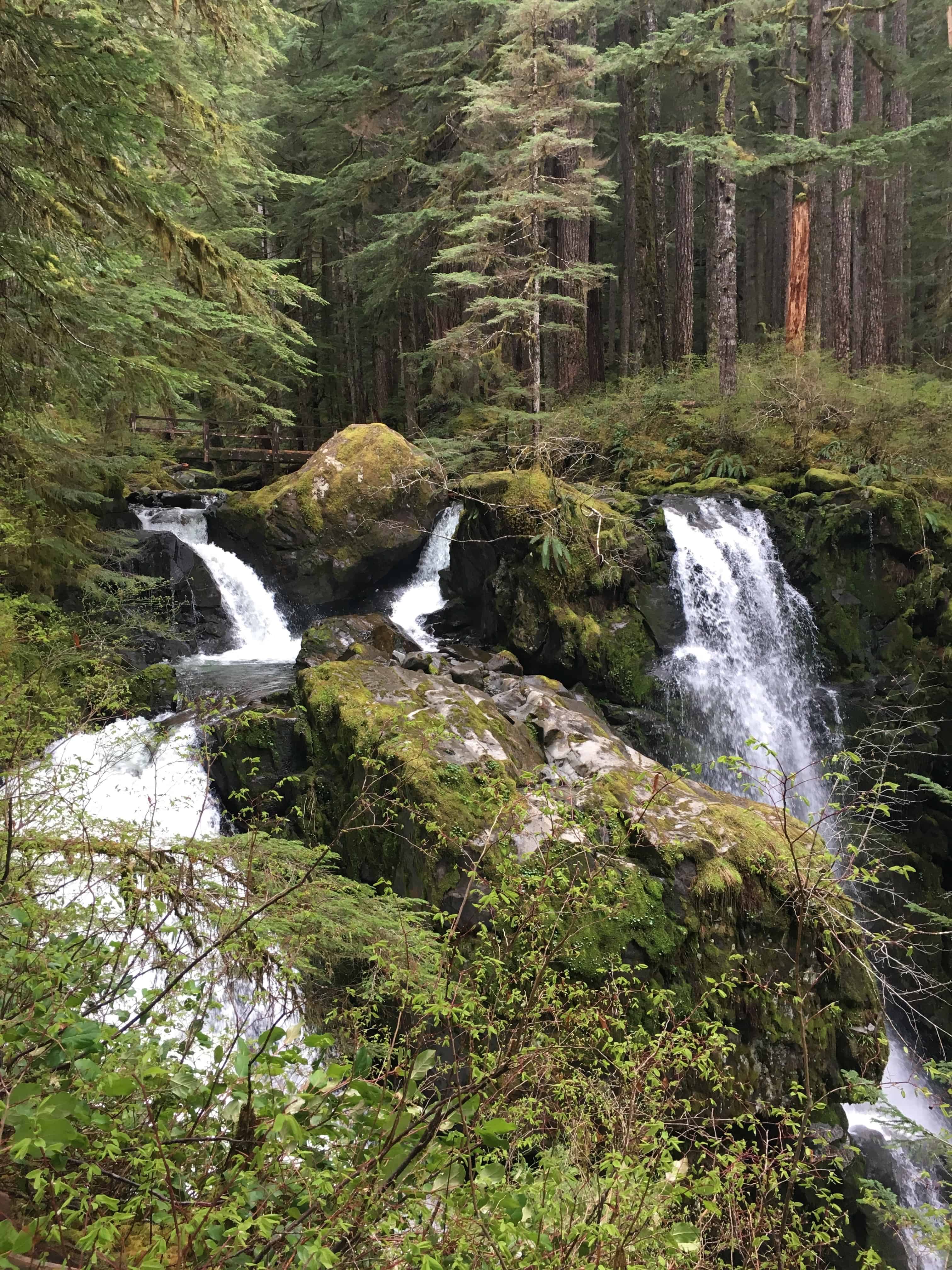 And although Lover’s Lane Loop is a popular trail, we only had one couple pass us while we were out there…they happened along just as I was torturing our group with my best rendition of Disney princess songs. Timing is everything! 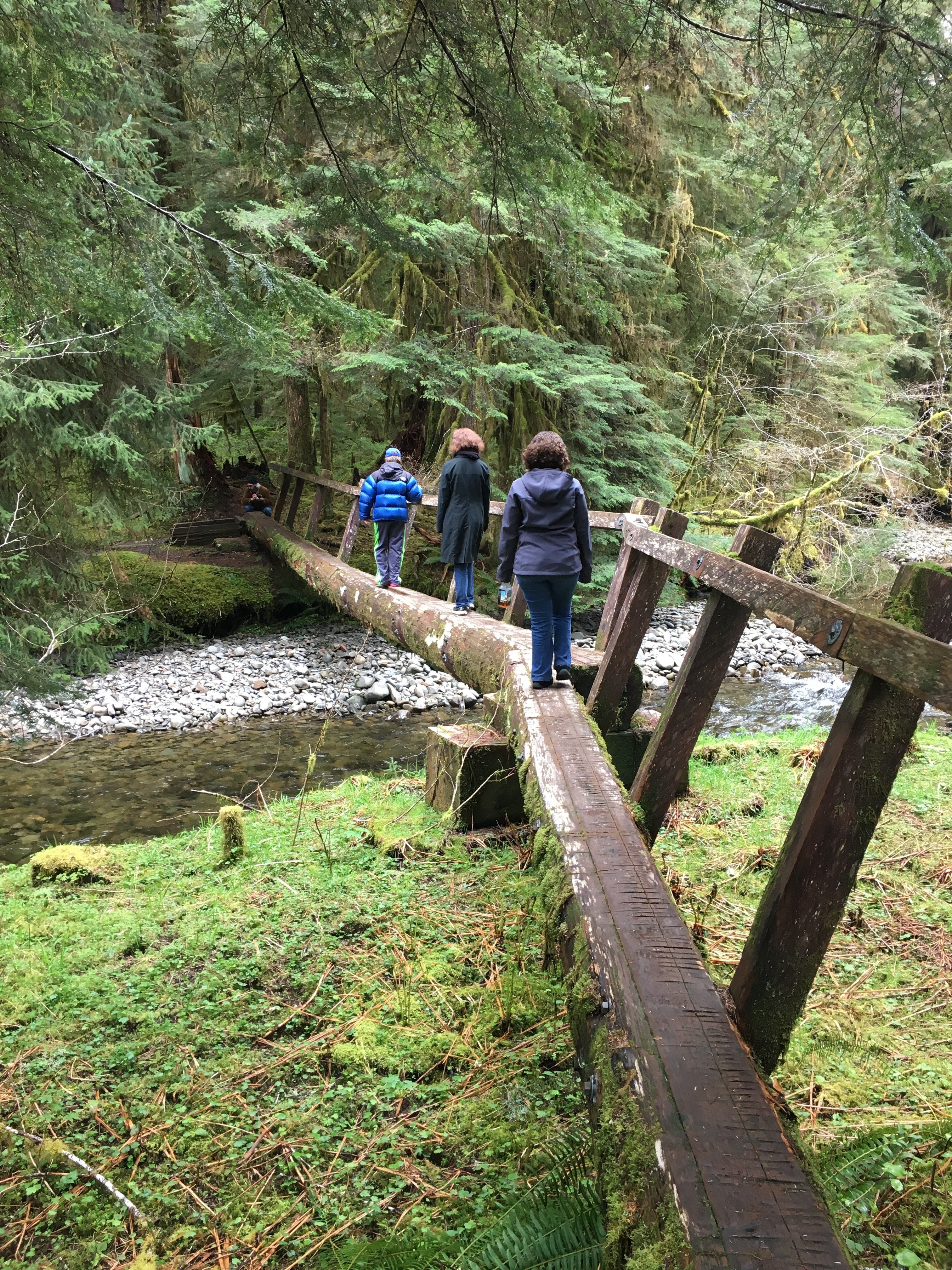 We made it back in time to soak for 30 minutes before they closed for the night. The evening soak was a much different experience than that of the morning, especially noticeable to a germaphobe like me! Whereas the waters in the morning were nice and clean, the evening soak was more like sitting in a bowl of stewing human broth. Tiny hairs and what looked like skin flakes were everywhere, I tried to ignore it as the water did feel really good after a long walk through the woods, but I rushed to the shower afterwards tout suite! 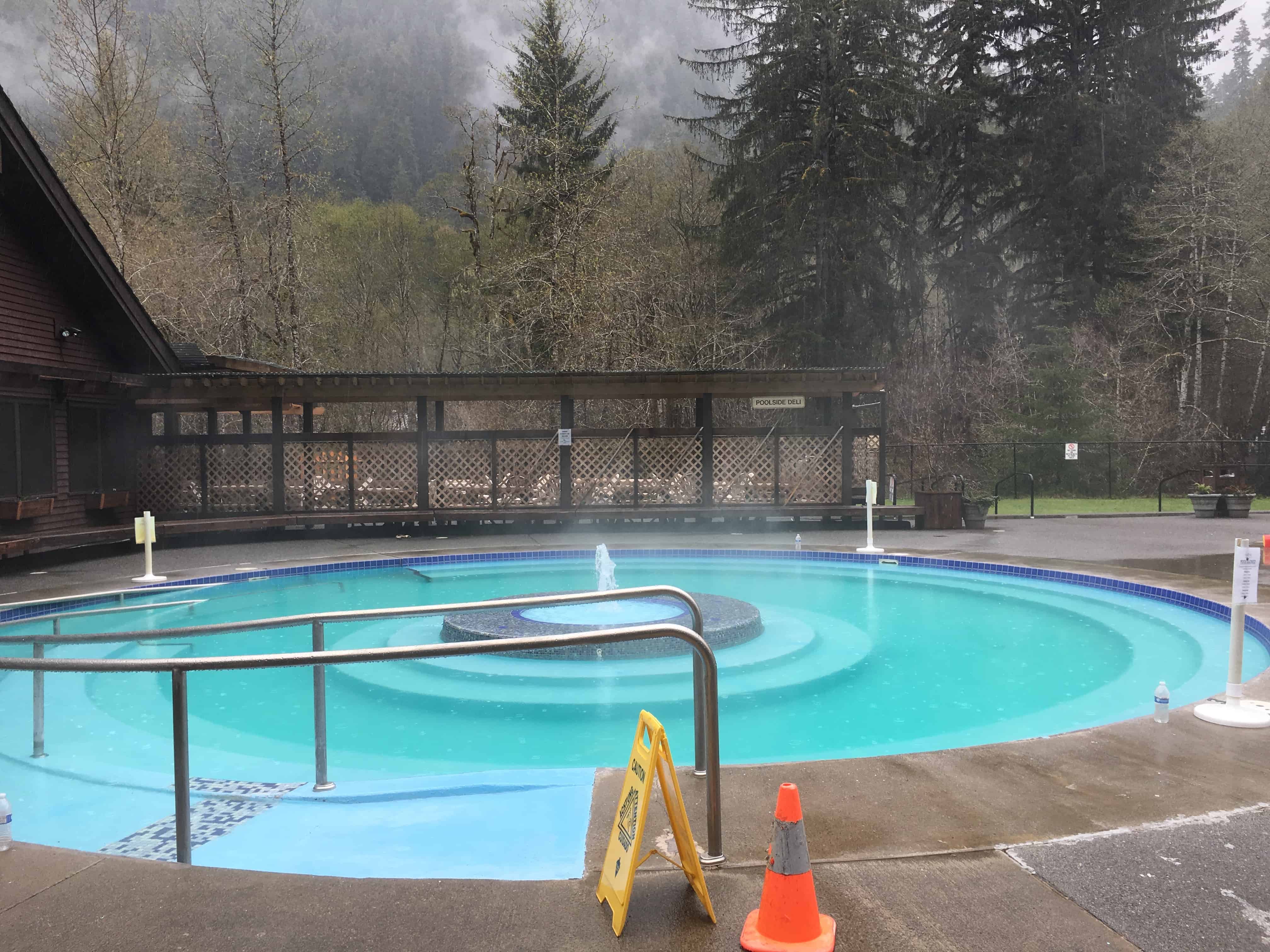 We were a group of six and we stayed in the Riverside Suite. The suite is in a separate building located along the Sol Duc River, a short walking distance from the main lodge. It is a bit of an odd set up, as the suite’s living space is located on the second story of a building used by the employees of the resort as what appeared to be a storage area for laundry. Also, be advised it is accessible by stairs only. 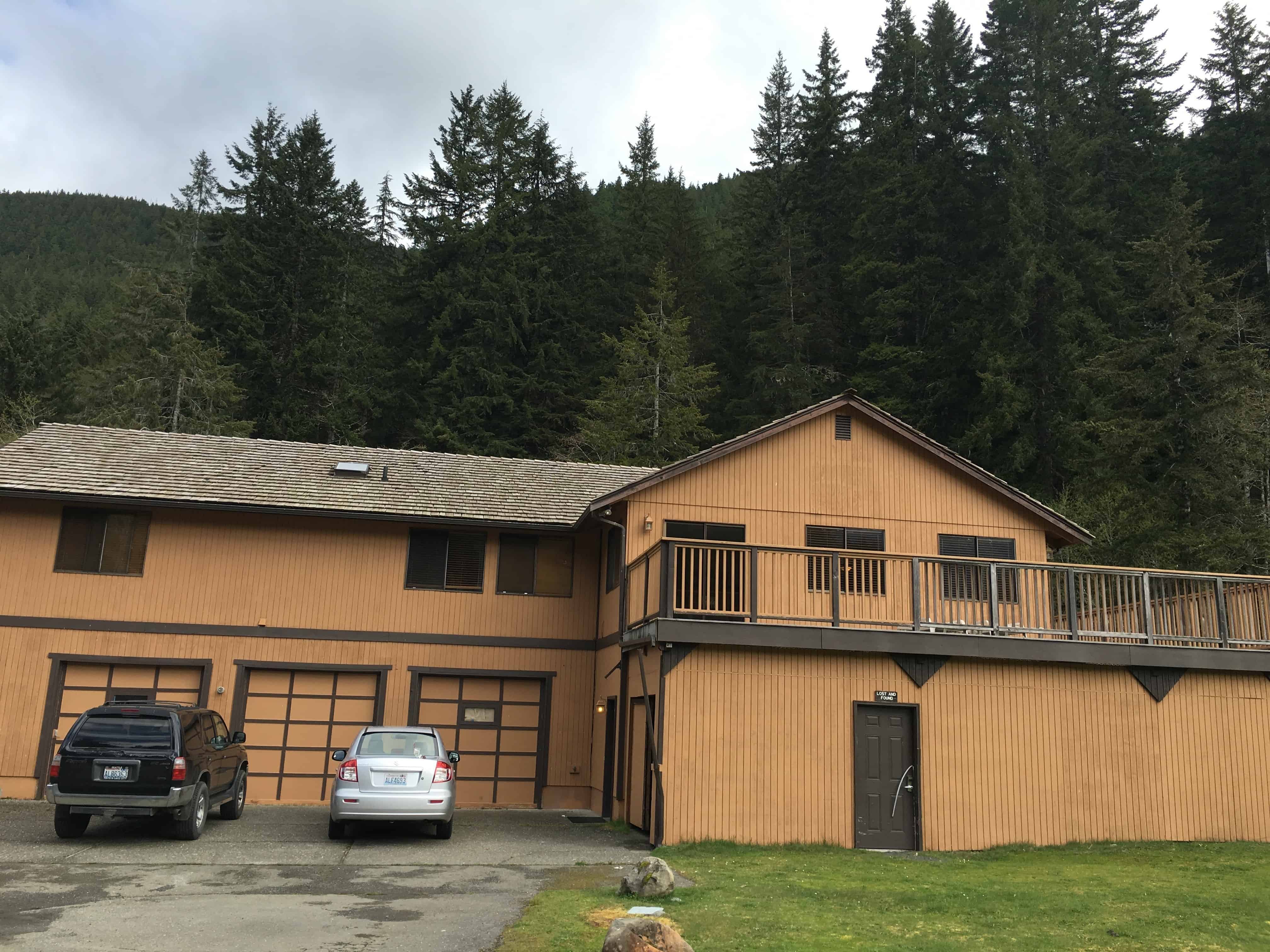 The suite itself was not glamorous, but remember this is more of a camp-like setting, so if glamour is what you are looking for, this isn’t for you. For us, it fit the bill for this trip and was a nice space for two families traveling together. There are three bedrooms, two baths, a fully equipped kitchen with dishwasher and microwave and three living room areas. 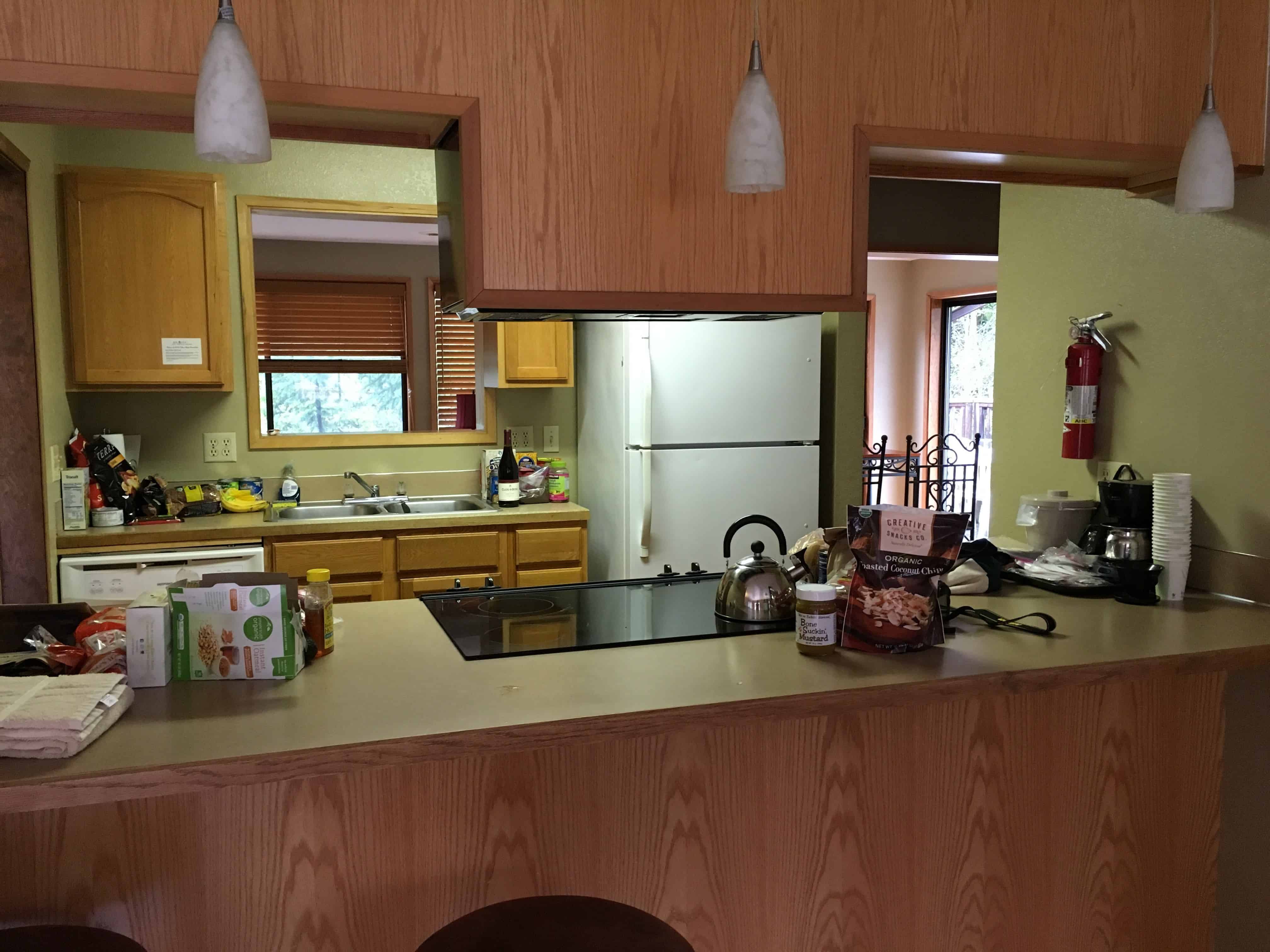 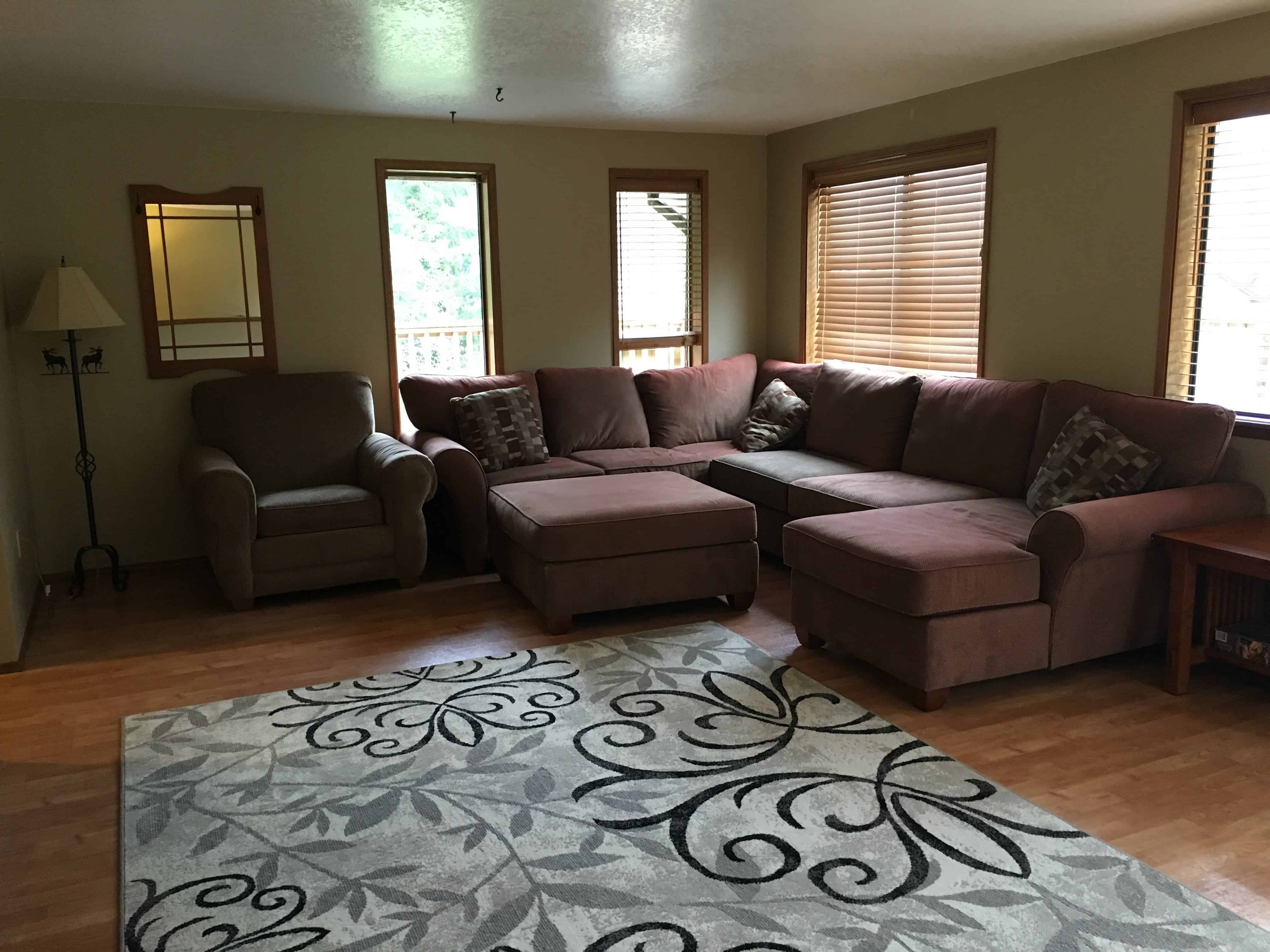 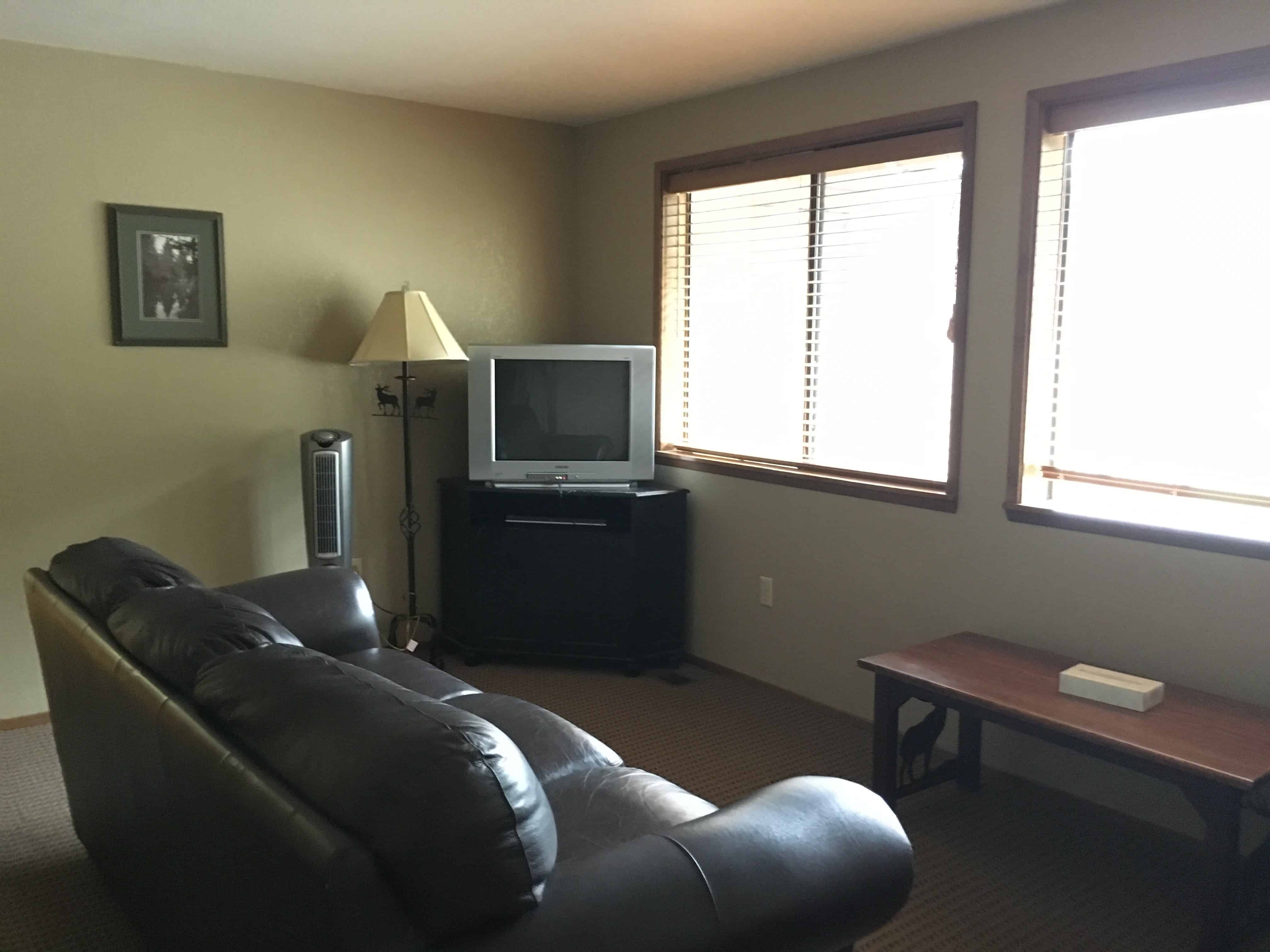 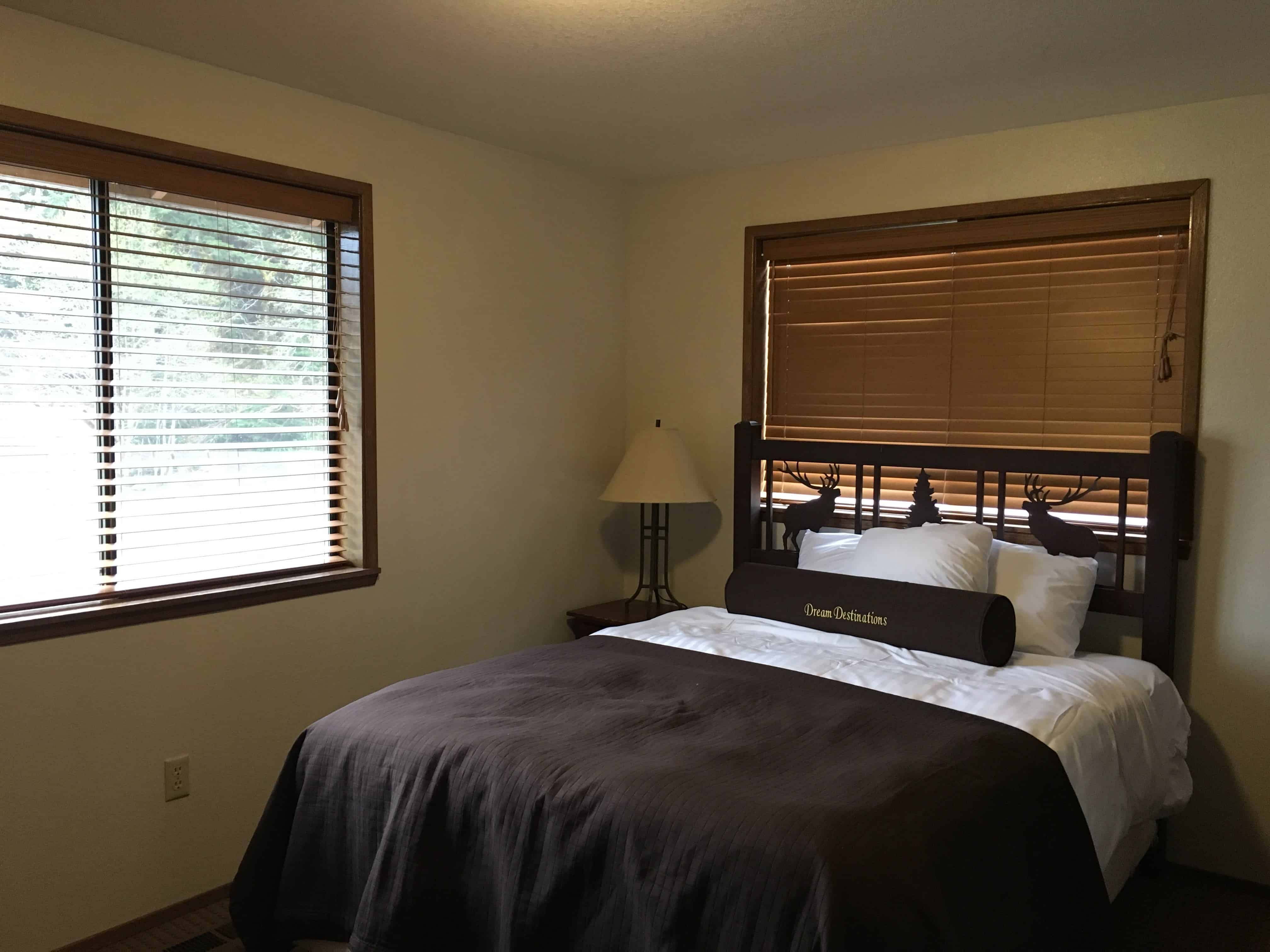 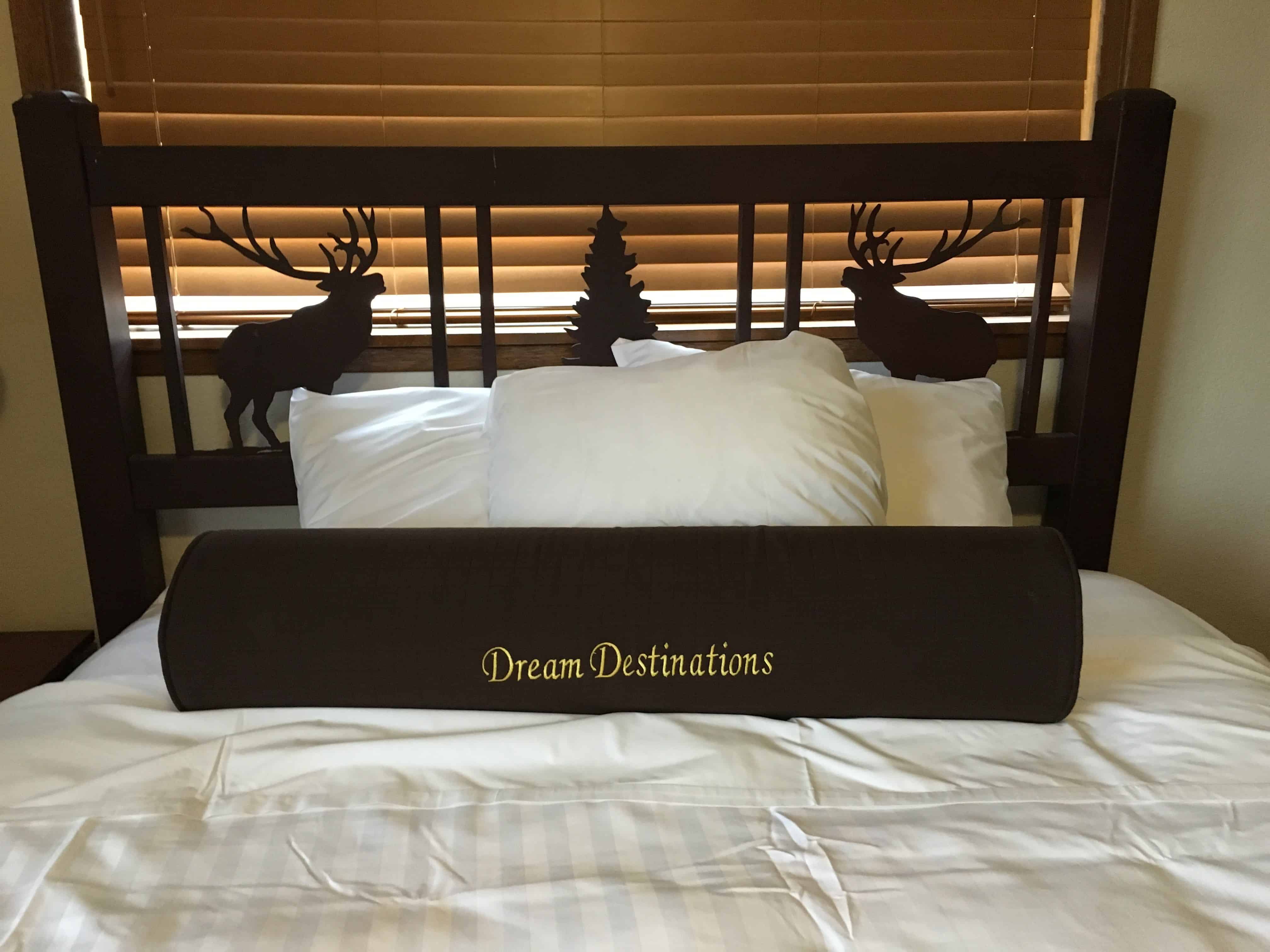 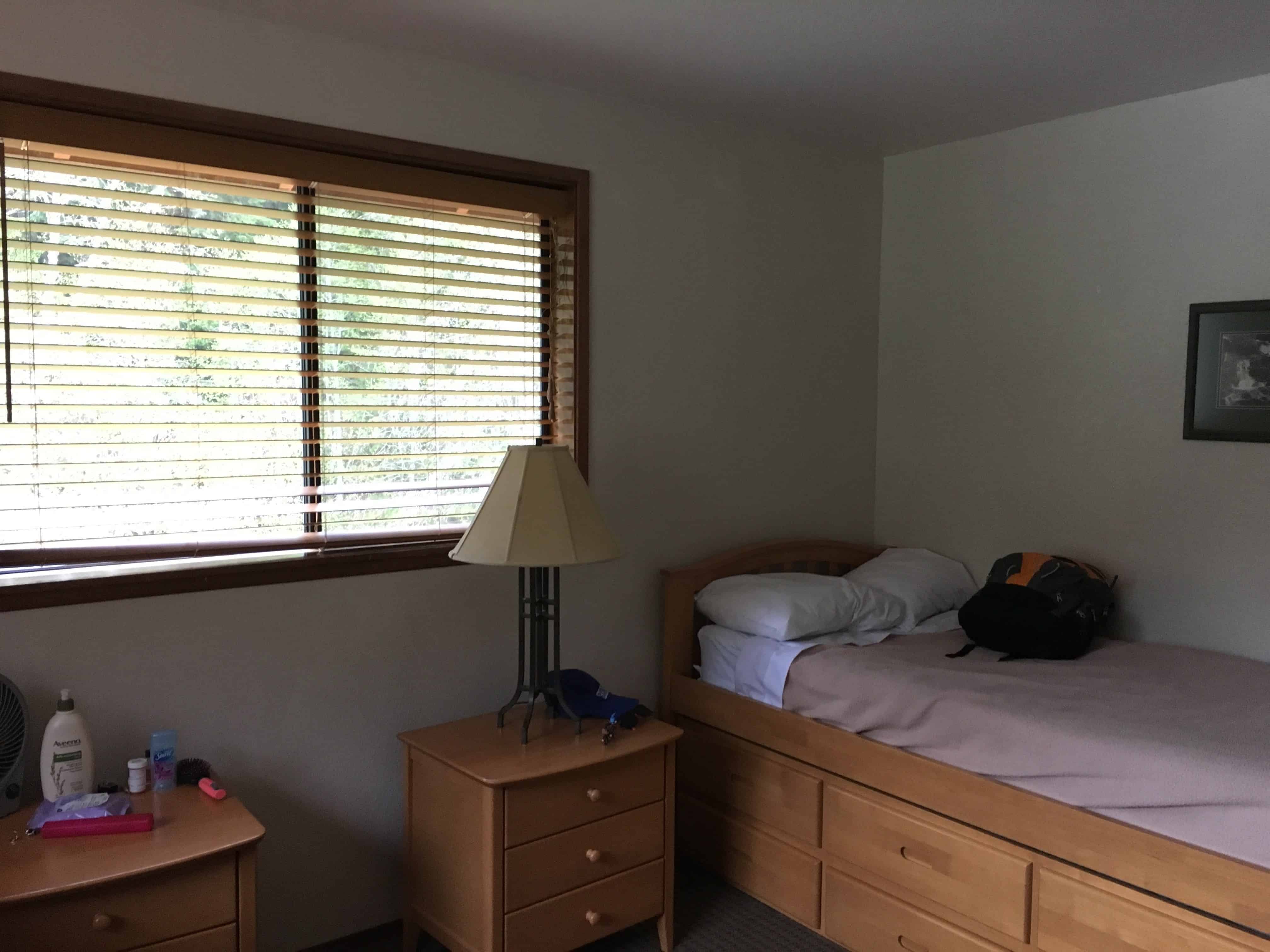 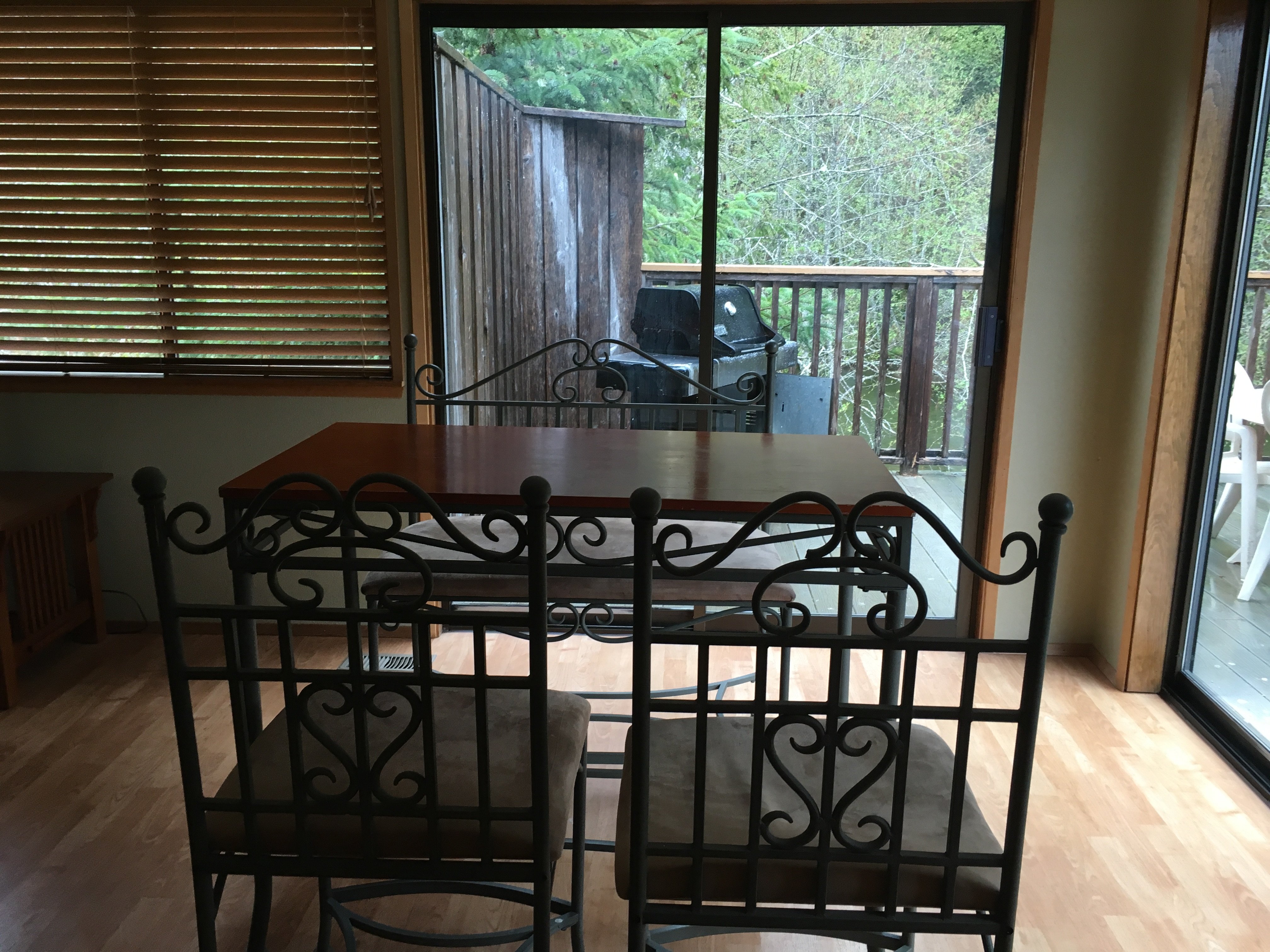 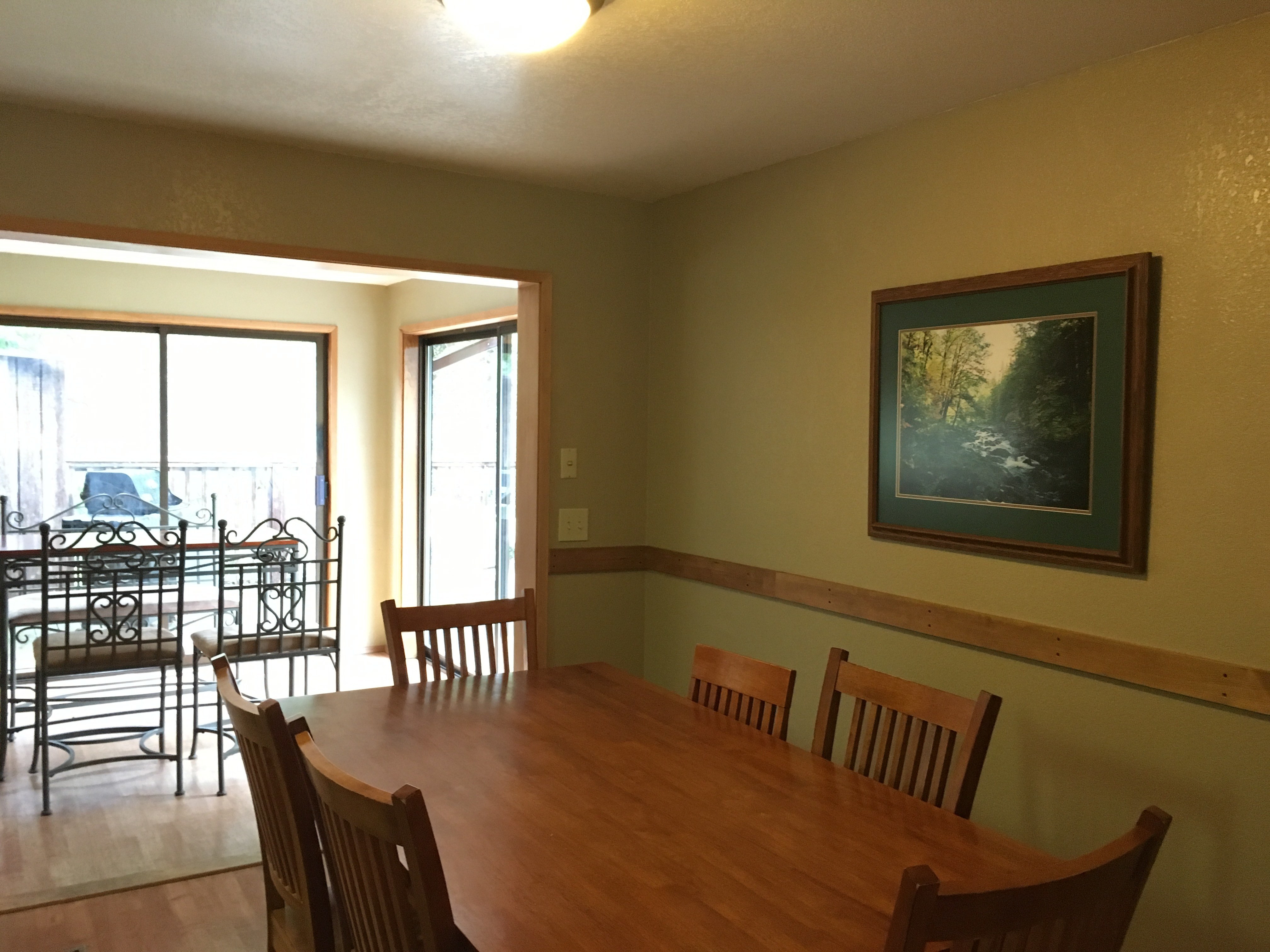 There is a deck on three sides, but it was chilly while we were there so we didn’t end up using it. Guests staying here receive pool access at no additional charge. If you’re part of a smaller group, or want separate quarters from others, the cabins looked very cute. Also, some of the cabins are dog friendly! This is nice option if you like to take Fido on trips with you, but be warned pets are not allowed on the hiking trails, even when on a leash.

Also, of note is the small store they operate in the main lodge. We were thrilled to see that, unlike some remote places that charge high prices for the luxury of acquiring things so far from towns, the prices were low! And, for the size, the selection was great. Our son loved the beef jerky! And we were able to grab ketchup, which I had forgotten at home. They also had great prices on all of their alcohol and water (a must when soaking in the tubs)!

Again, this isn’t a fancy resort, but if you don’t need a five star spot to have a good time, and are happy in a rustic/older setting, the Sol Duc Resort is great! Despite my aversion to the sulfur smells and the late-in-the-day dirty soak, I found I really enjoyed the experience overall. 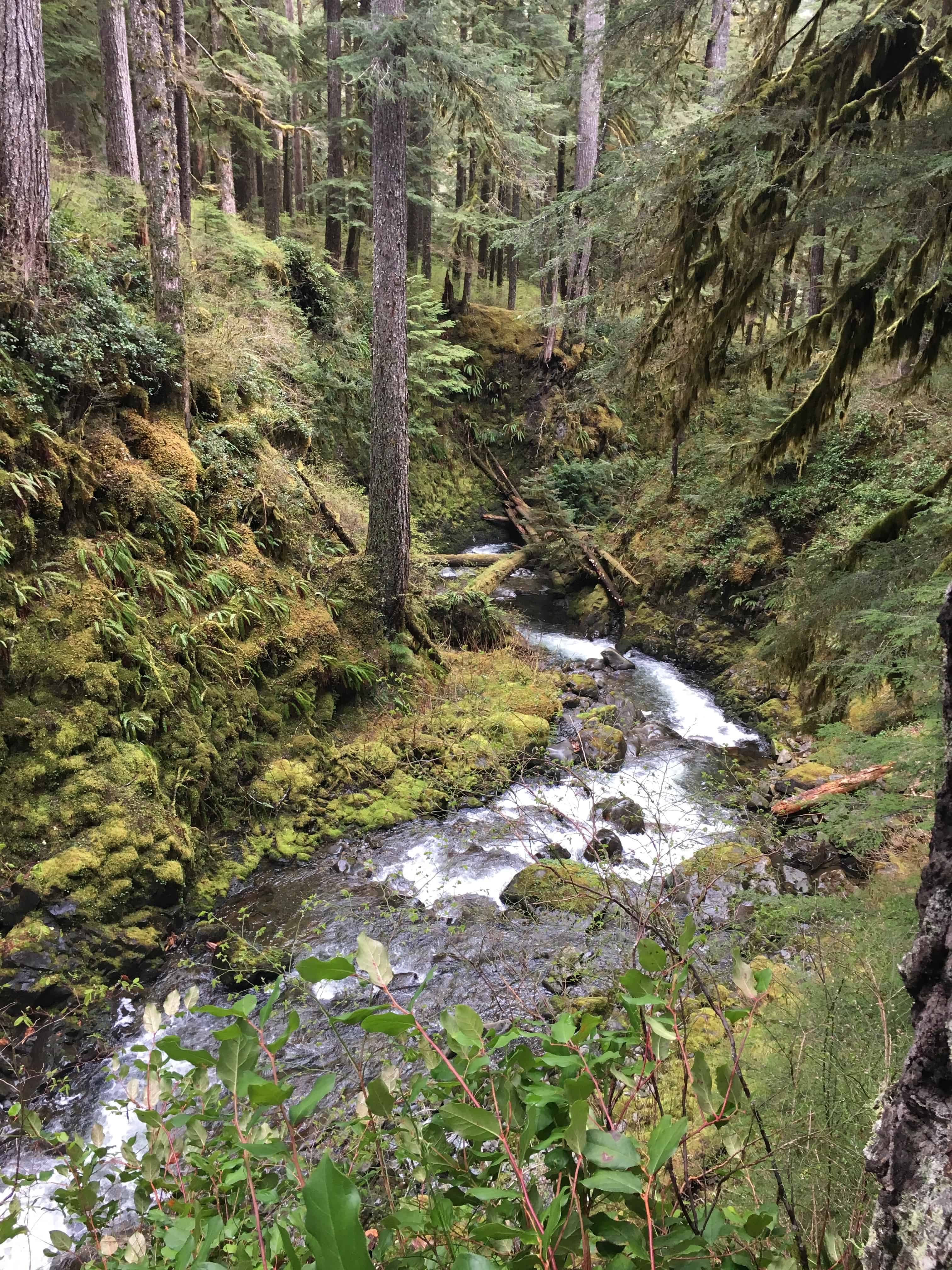 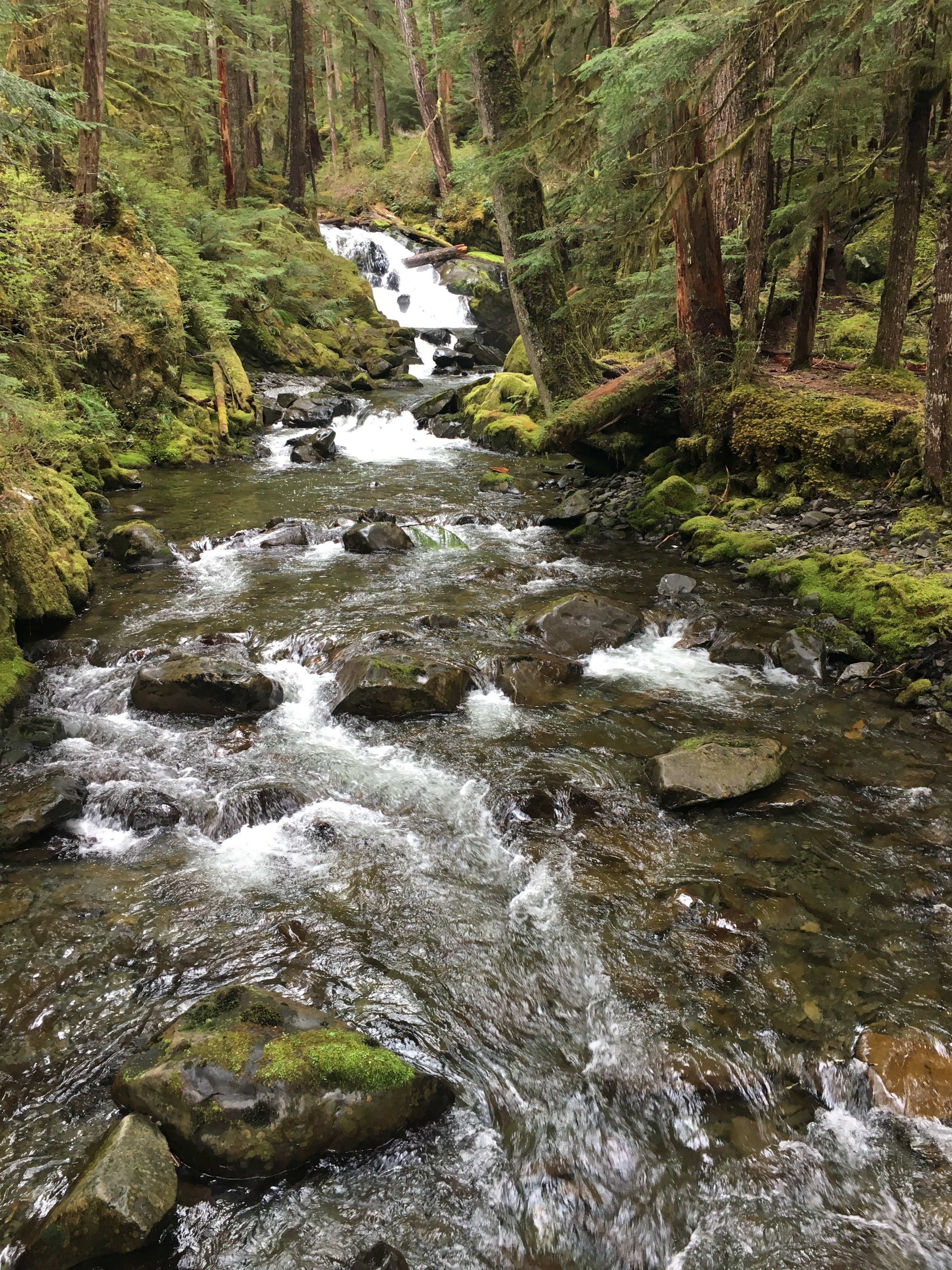 Whether you like to believe in the legend of the dueling dragons or subscribe to the scientific explanation that the mineral-rich water is heated from the rocks of the earth’s interior before bubbling up, you will be sure to find the spectacular setting and soothing waters enjoyable. Folks have been coming to a resort on the springs since the first one opened (an extremely elaborate one at that) in 1912. Unfortunately, it burned down soon after in 1916. The current resort was built in the 1980’s.

And though the valley has seen a steady stream of visitors throughout time it remains, I imagine, much as it’s always been. A wondrous place to explore and sooth the soul. I invite you to try it out for yourself and whilst there, be sure to have a look around the rest of Olympic National Park, a spectacular oasis in the Pacific Northwest.

Read what others have to say about Sol Duc Resort on Trip Advisor, a MilesGeek affiliate.