My family was lucky enough to enjoy a cruise through the Hawaiian Islands on Norwegian Cruise Line’s Pride of America.

We stepped onto the Pride of America in Honolulu, Hawaii and were greeted by hula dancers. In the boarding area my husband, Jed, and son, Milo were given shell leis and I was given a flower lei. The boarding process itself was efficient and friendly and we found ourselves surrounded by other passengers who seemed equally excited to be there. 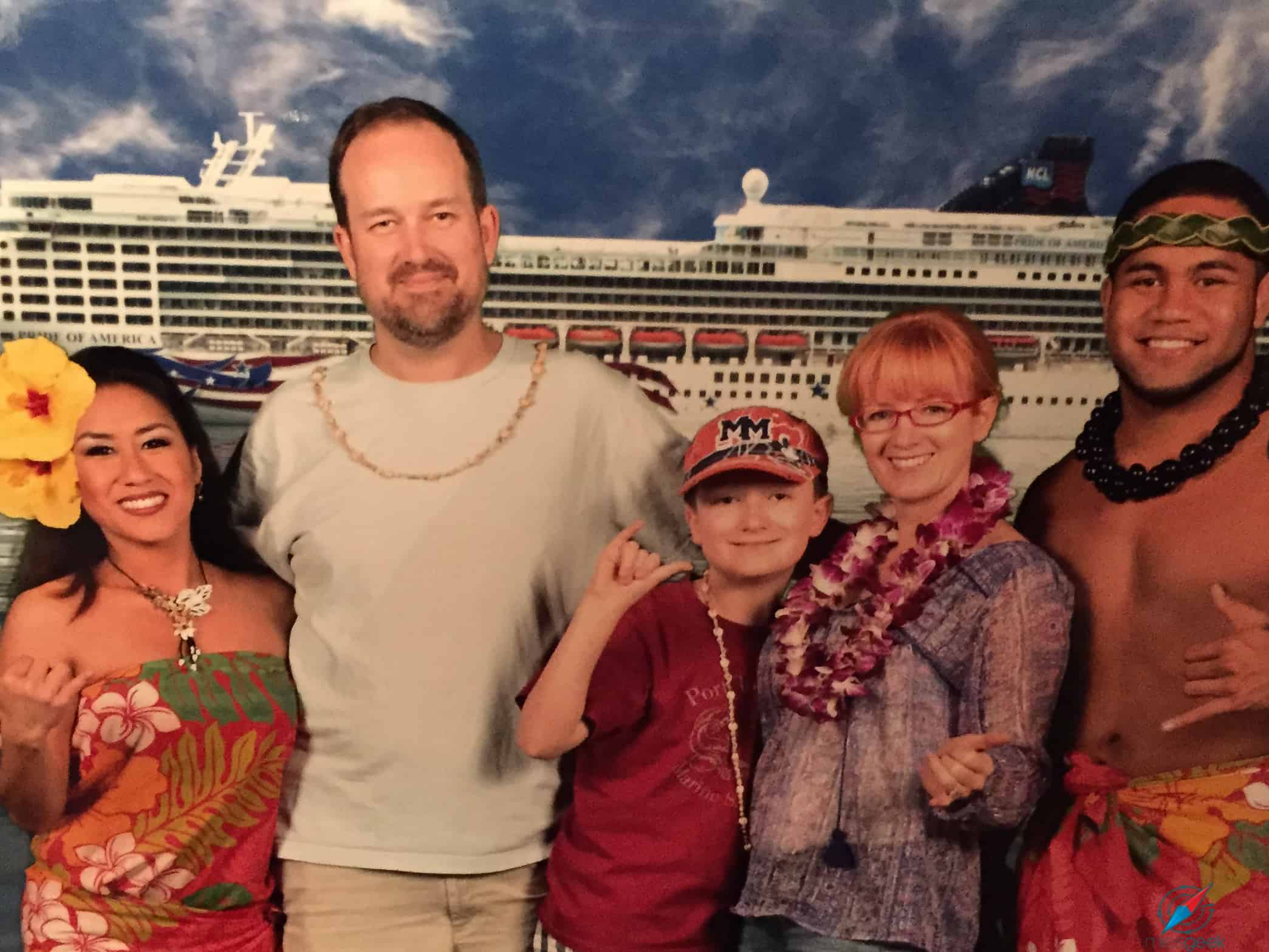 The turn around for this ship is pretty amazing. The passengers ending their journey dis-embark on the same day the new ones come aboard. Hence it is common for one to board before the staterooms are actually ready. We took this time to explore the ship that would be home for the next week. We also went to the Splash Academy, NCL’s (Norwegian Cruise Line) kids club, to get our ten year old son, Milo, registered to participate for the week.

As the name suggests, the ship is themed ‘American’. While exploring, we found an oversized chess set on one of the decks. My husband, Jed, taught us how to play. Milo won! We met a few of the crew members, helped ourselves to food from the grill by the pool (Milo said the hamburger was amazing) and Jed and I settled into cruise mode with a refreshing mojito. The weather was a typical gorgeous Hawaiian day. Full of sunshine and warm breezes. 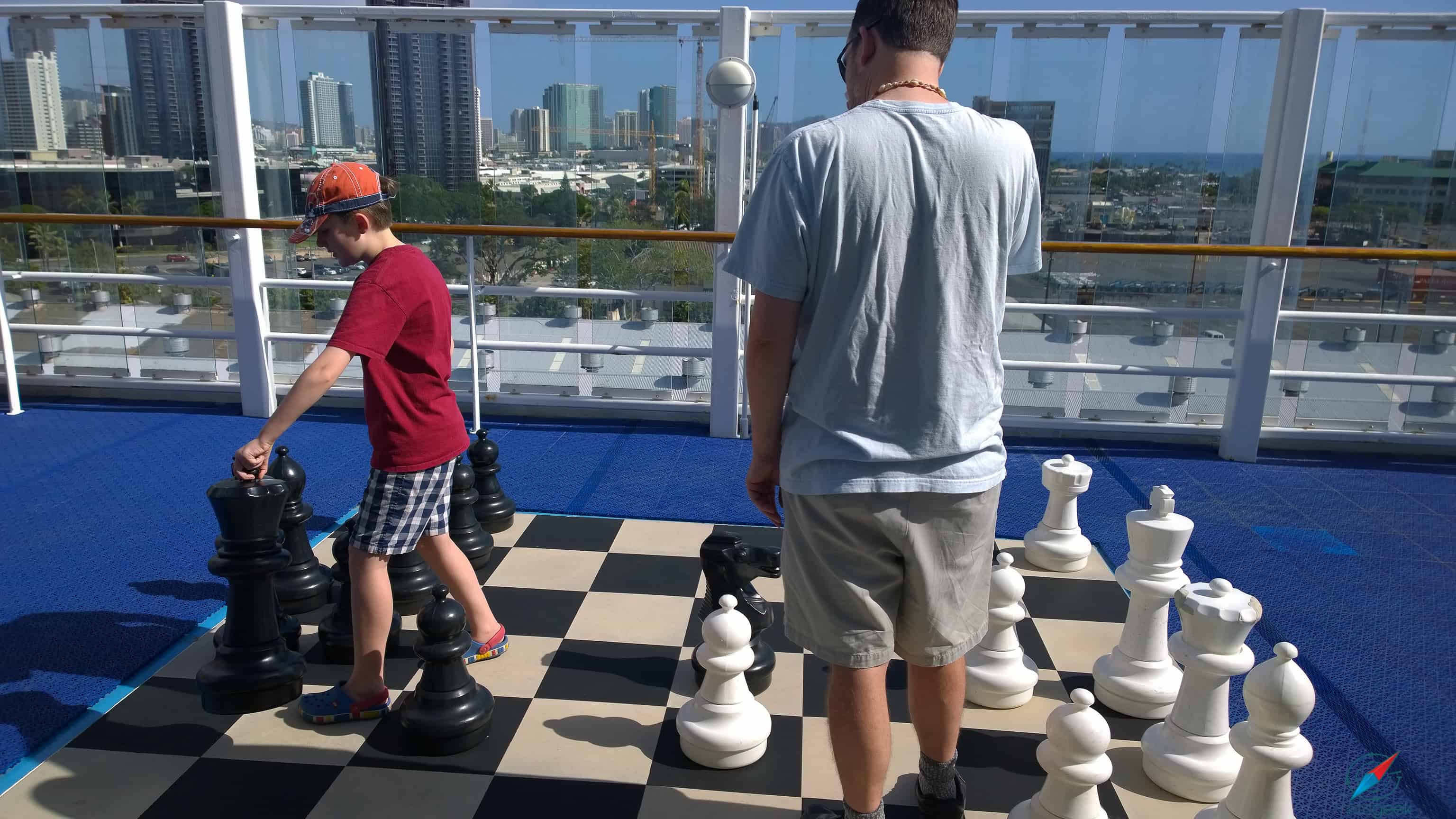 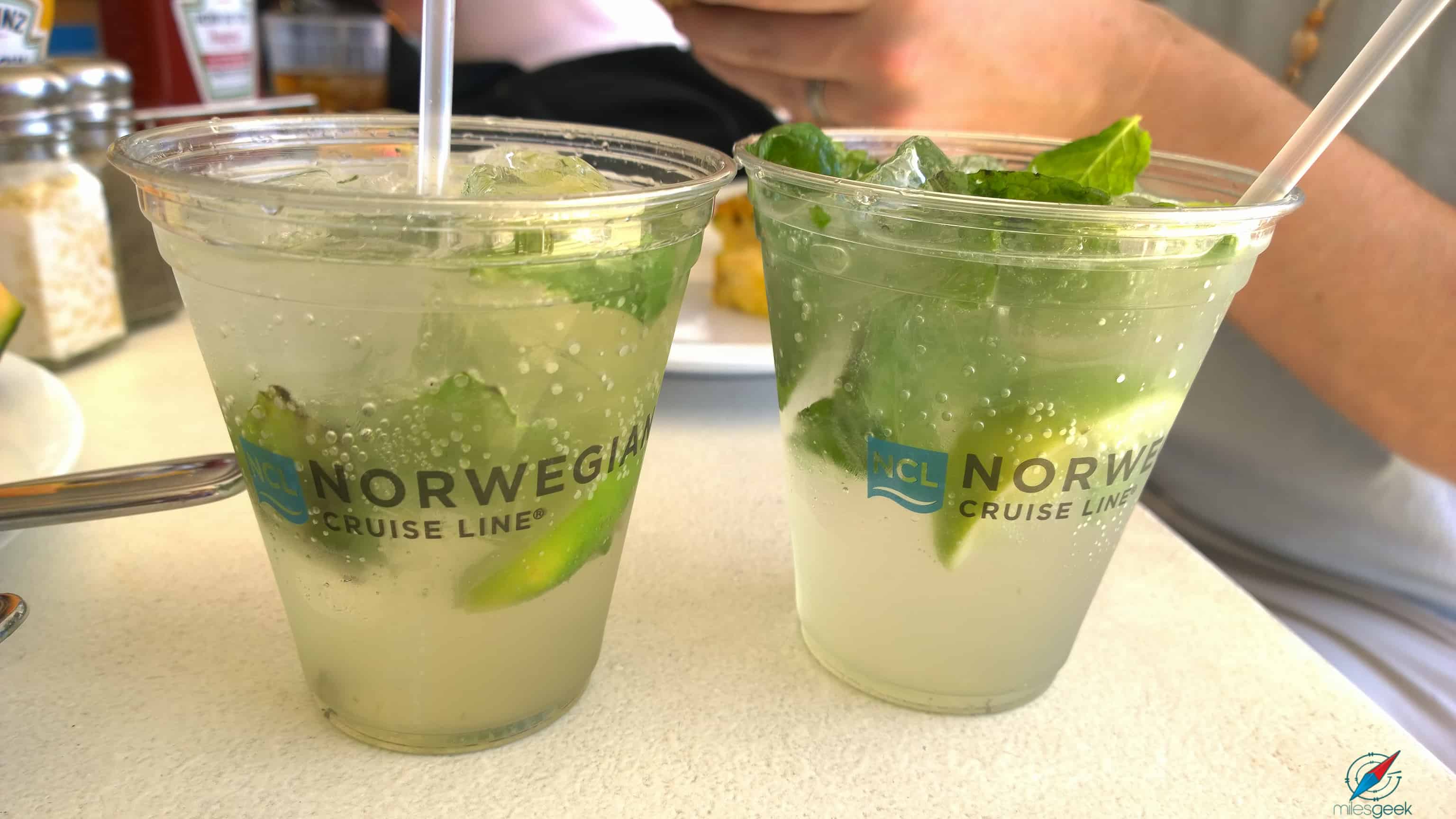 They announced decks by number as the cabins on each floor came available. Our deck was ready about the time we were finishing our refreshments, so we headed to our room to check it out. It was a nice room with a balcony, but we immediately realized that it felt small in comparison to the balcony we had on the NCL Jade on a previous cruise. We had been in a mini suite on the Jade…amazing what a few extra square feet can do! Victoria Hart wrote a piece we can all relate too on Art Auctions on the Jade.

After checking out our room we attended a meet and greet with others who had registered on the cruise critique site, Cruise Critic. Cruise Critic is an online guide to cruising that includes a forum for posting cruise reviews and information. The meet and greet took place in the library which has a fabulous selection of books and is in a great setting. 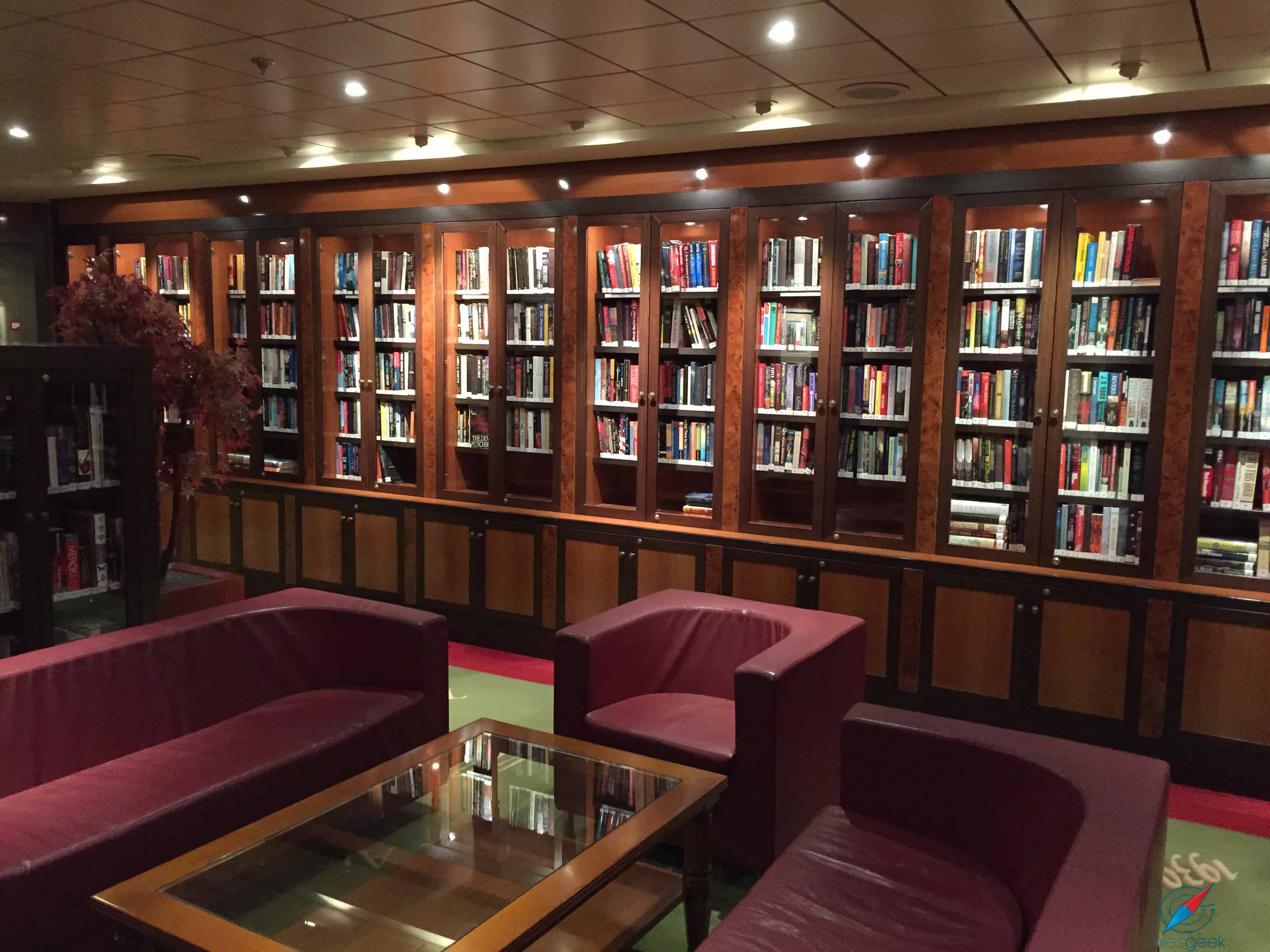 We met some of the crew staff, including the hotel director. We discovered that his wedding was in the same location as ours on Kauai! We found him and the rest of the crew to be both professional and kind. We chatted with fellow cruisers from various parts of the world, which is one of the many aspects of cruising that we enjoy. The chance to talk to others from around the world, or even other states, is an important aspect for us. We enjoy hearing how others view the world, and find it interesting to hear their impressions of America/Americans.

After we attended the mandatory muster (lifeboat and safety drill) I went to the gym while the boys went to the pool. I was basically the only person in the gym due to the fact that people were still boarding, and perhaps, because many people had flown in to Hawaii the same day, they were too tired to exercise. However, after hearing that the average person gains 7 to 14 pounds on a cruise, I made sure that I went! I managed to do an hour on the machines thanks to the help of the built in TV screens on every machine. I watched Meet the Fockers and actually found myself laughing while exercising! The gym was well equipped with treadmills, ellipiticals, and bikes. As well as weight machines and free weights. They even had a small refrigerator that contained chilled towels. Nice touch! 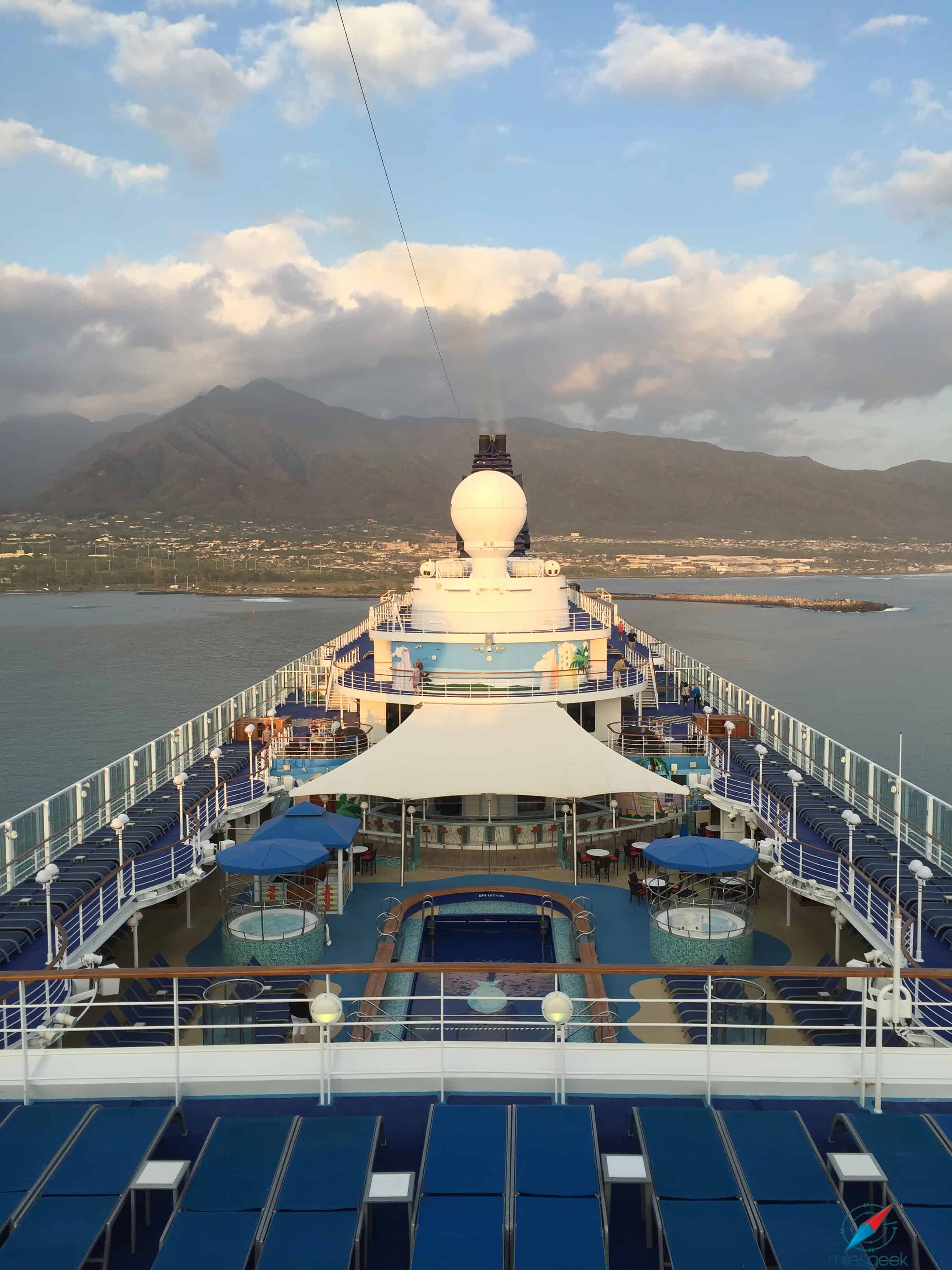 I went to find Jed and Milo at the pool and there was a DJ playing some great music. We sailed away from Honolulu after night had fallen…a gorgeous site indeed. After showers, we headed to the theater to see that night’s show…it was a compilation of various acts by those that would be performing throughout the week. The cruise director introduced some key staff members, many we had met earlier at the meet and greet in the library.

For our first night on board, we decided to go to dinner in the main dining room. The surroundings were lovely, sparkly stars on the curtains and gorgeous lights. The pillars were shaped to look like skyscrapers, in keeping with the America theme, and were lit from within. 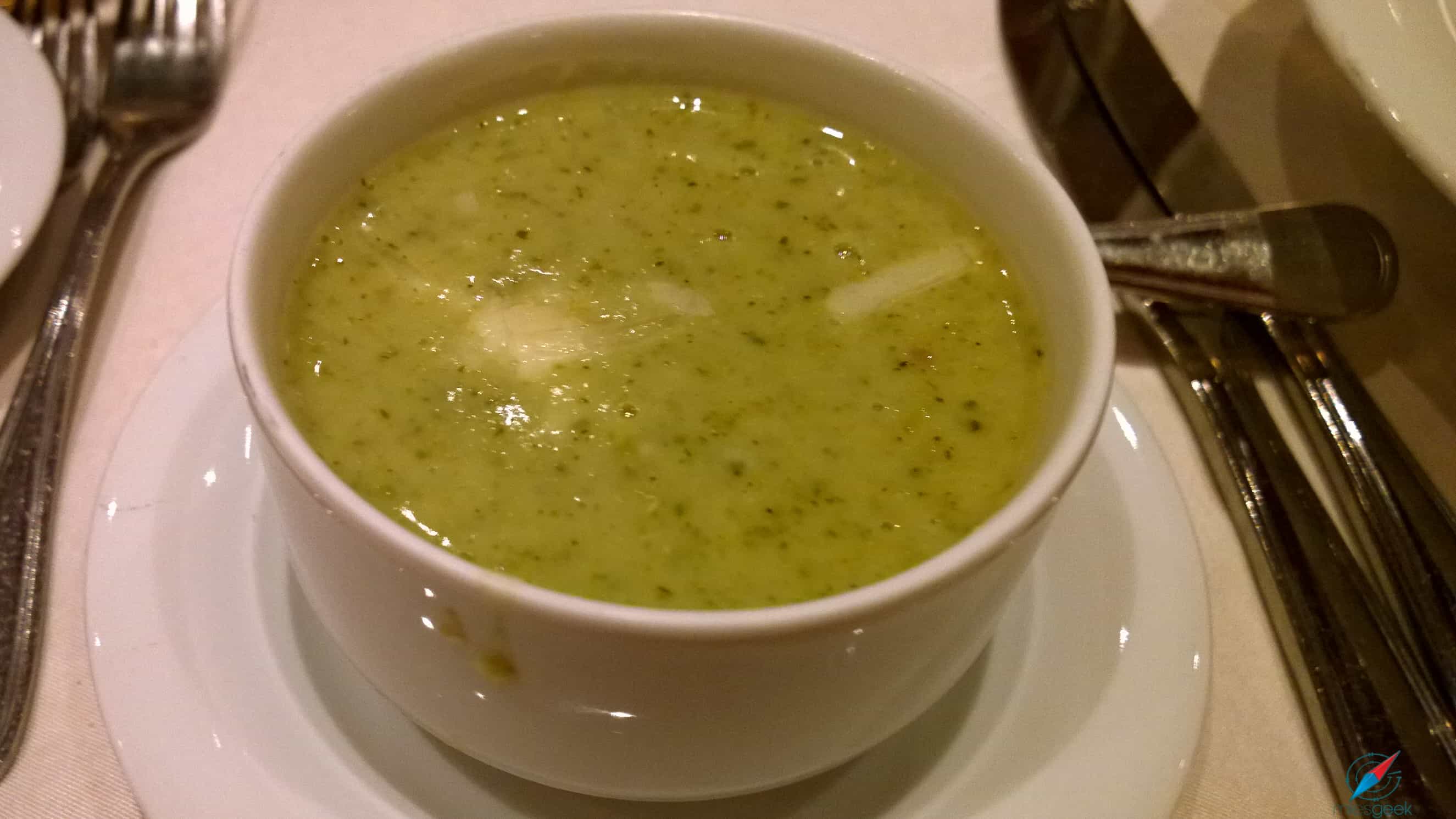 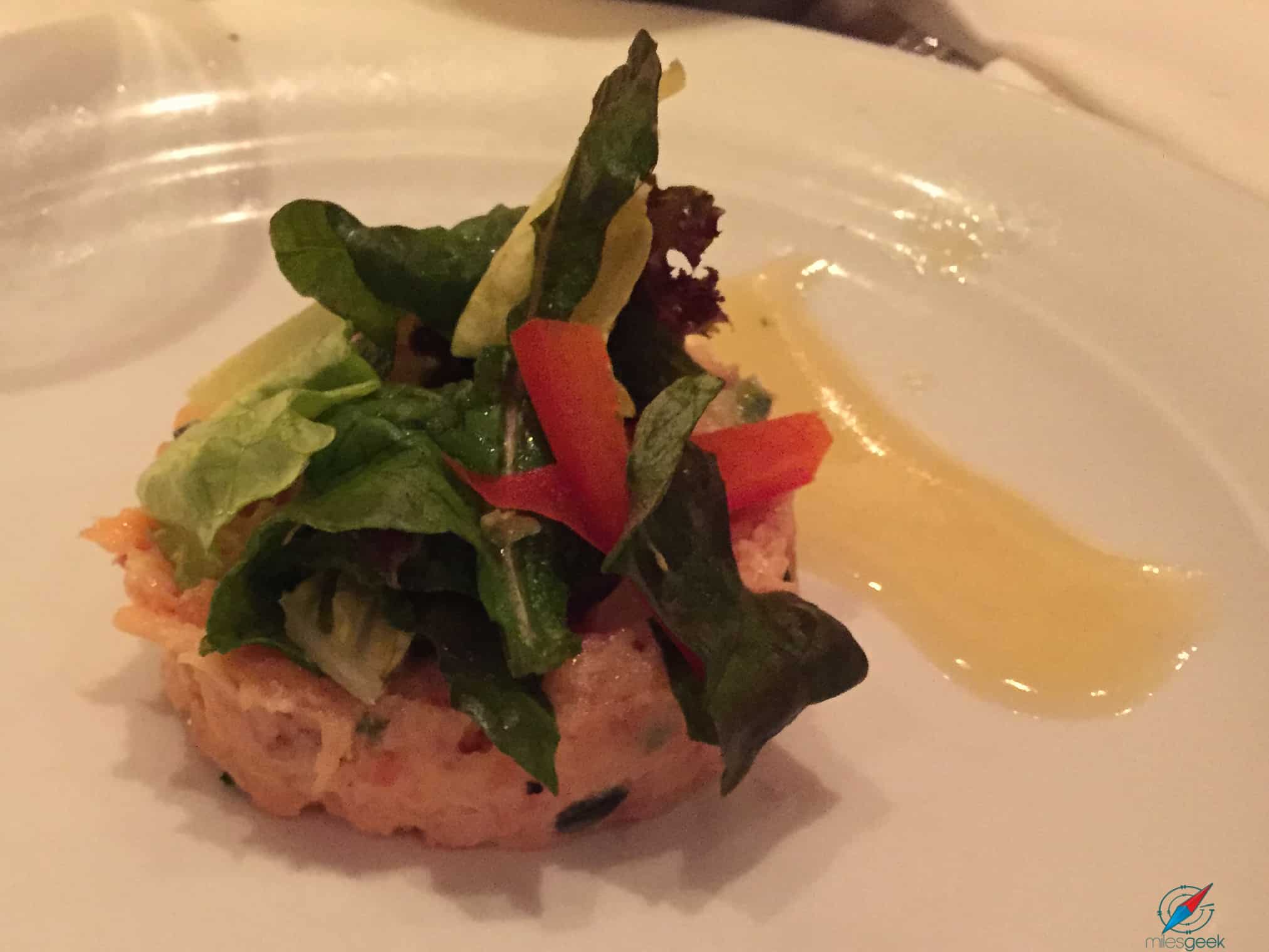 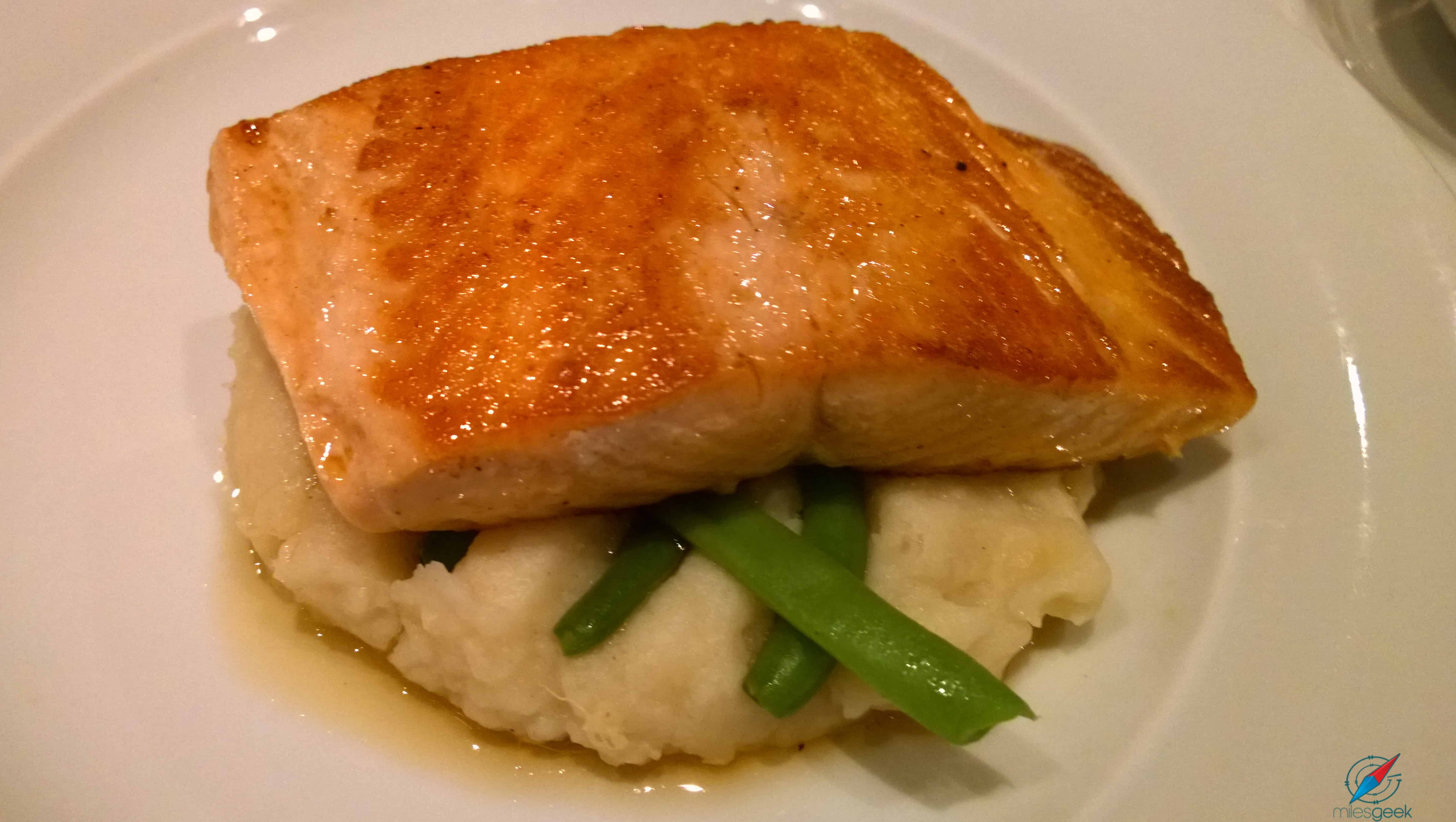 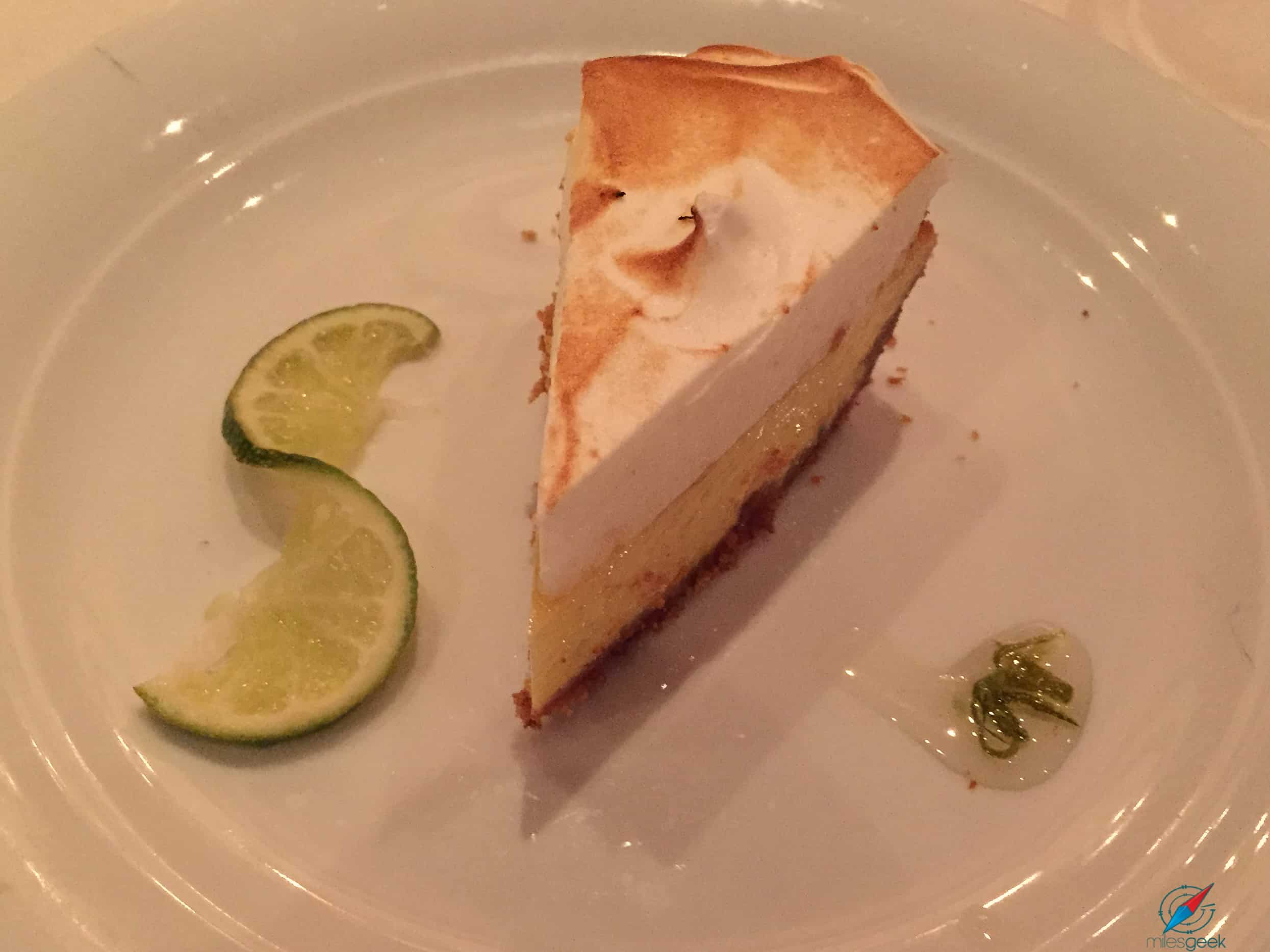 We had broccoli soup, salad, and salmon tartare for starters. I had salmon as my entrée. I was a bit nervous ordering it, as salmon is easily overcooked and seeing as how we live in the Pacific Northwest we can get really great salmon at home. My fears were unfounded as it was cooked perfectly and had a nice crust (though I thought it needed a little more seasoning). Jed had garlic shrimp and Milo had soup and they were both happy. Key lime pie was the dessert choice for Jed and me, vanilla ice cream for Milo.

All in all the service and the food were nice. We were spoiled on our last cruise on the NCL Jade as we had prepaid to use all the specialty restaurants and they were amazing! However, considering the amount of people they serve in a single day, the food was fairly impressive. 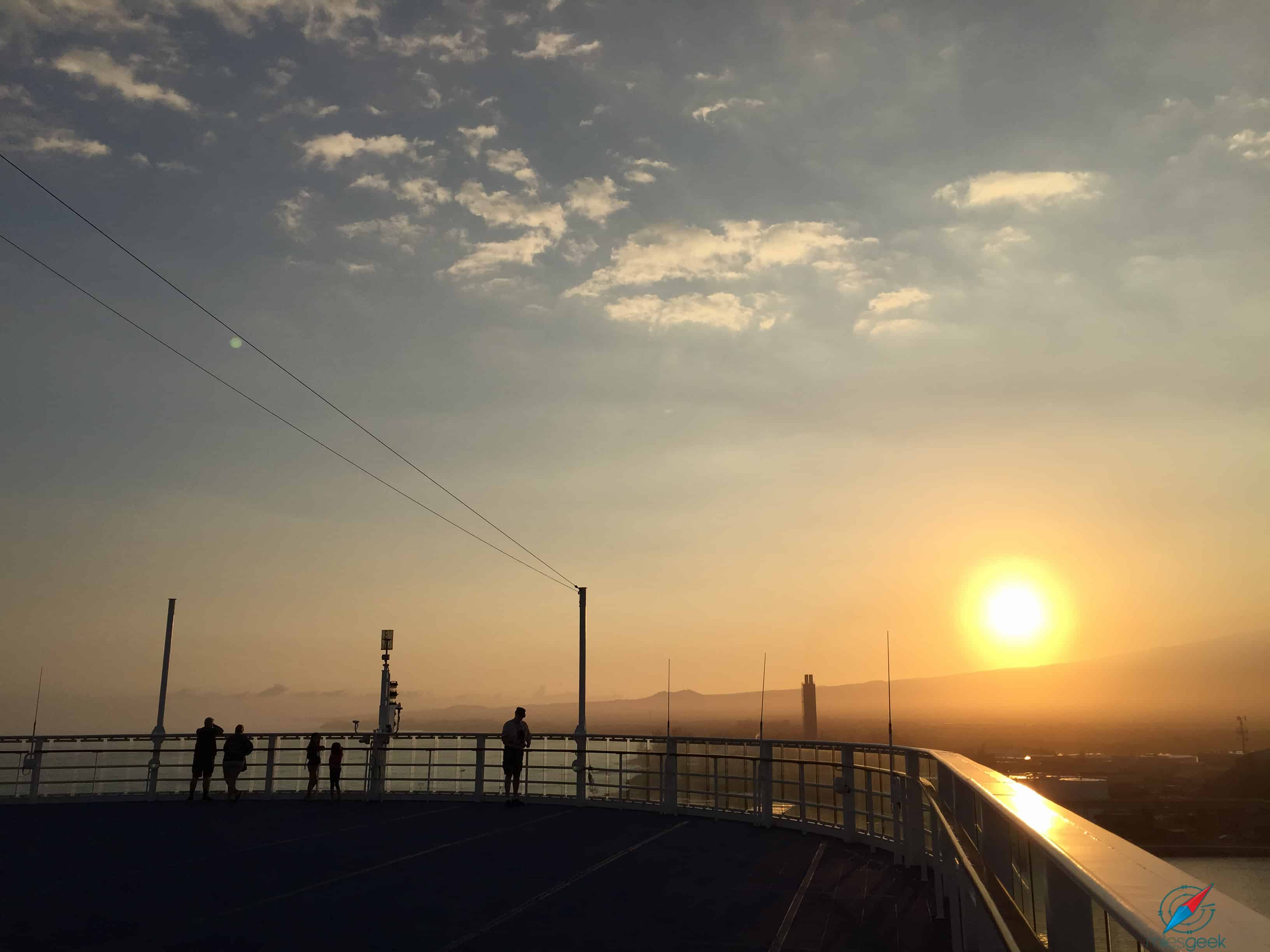 After a long day we headed back to our cabin looking forward to docking in Maui the next day and meeting up with an old college friend of mine.

Check current pricing and support MilesGeek with our affiliate CruiseDirect.

A Week on Norwegian Cruise Lines Escape; Not necessarily for the birds!