About an hour and a half drive out of Paris, Milo and I made it to our first ever house/pet sit in the small medival village of Villeneuve Yonne. It is located in Northern Burgundy, or as they pronounce this famous wine making region here in France… Bourgogne. Villeneuve sur Yonne is surrounded by a partly intact wall, built during the 12th century, which was one of the eight residences of the French kings. 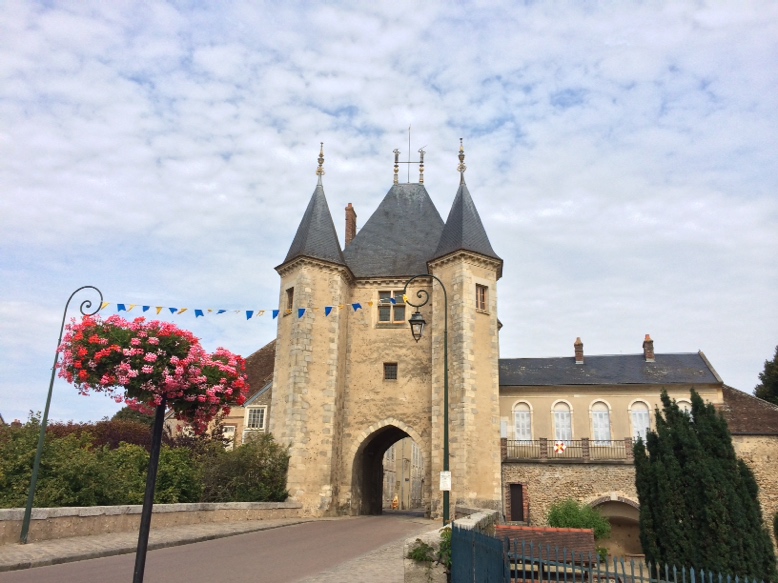 We are staying just outside of town in a lovely Bed and Breakfast. The owners needed to go to Provence (ah…my favorite!) and so had advertised for someone to come stay at their house and watch their cat, Tigress (pronounced, Tea Greez). They closed the B&B, and so we have the run of the place. It’s lovely. It was built in the 1700’s! It’s very quiet except for the doves and bees…and the occasional complaint of a neighbor’s dog. 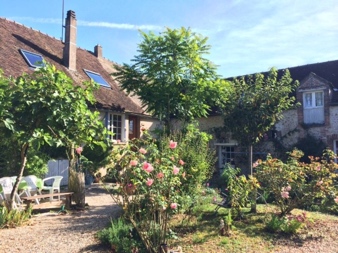 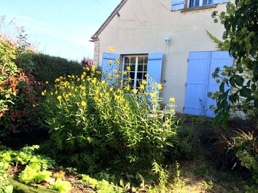 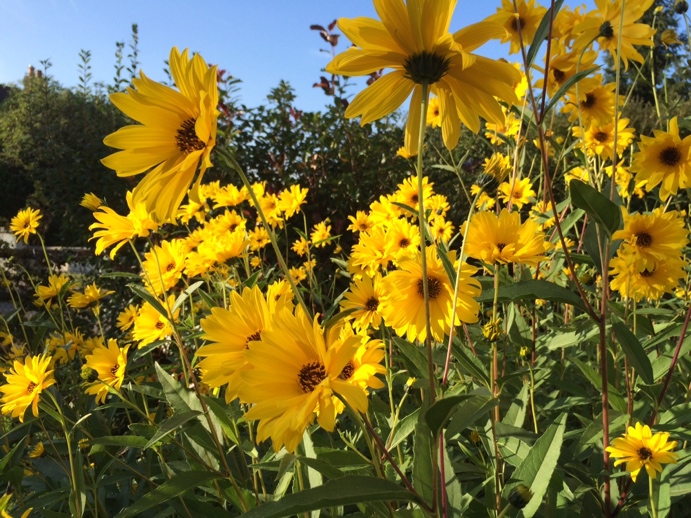 Even in France, laundry has to be done! 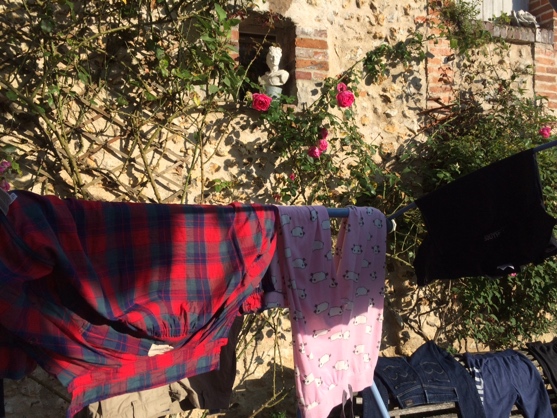 The owners, David and Agate are wonderful! 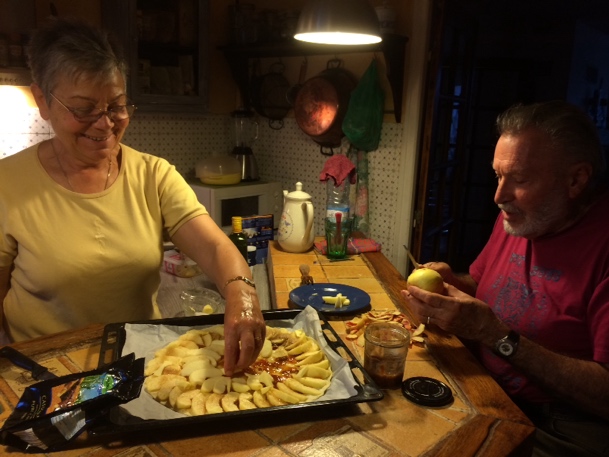 They greeted Milo and me with warmth and cooked us a wonderful dinner! 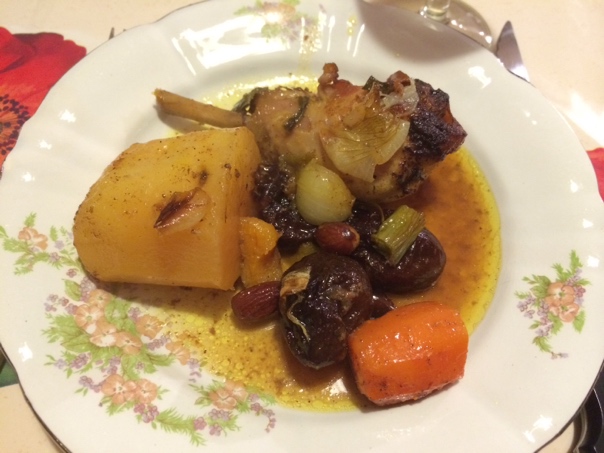 David has a photography school in Paris. Their son and his girlfriend and their baby were here the first night as well…it was a great experience dining with them and hearing about their lives. Their son is a director of short films and his girlfriend (she is my age, he’s 29…yeah!) is a comedian and they live in Paris. So much better than being on our own in some hotel. They all left the next morning after explaining how things work. It was sad to see them go.

Milo and I were still sleeping a lot at odd hours and having a hard time acclimating to the time change…we are nine hours ahead of the west coast…but we managed to get out. Nearby is the town of Sens, and the oldest Gothic Cathedral in all of France. 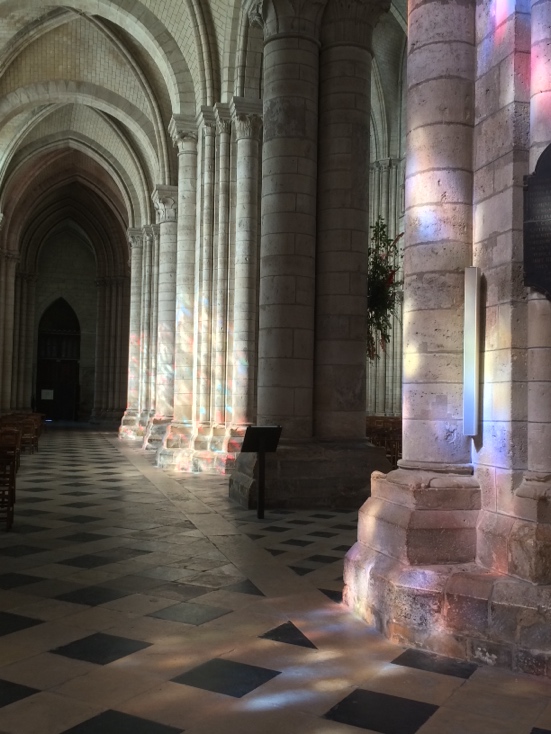 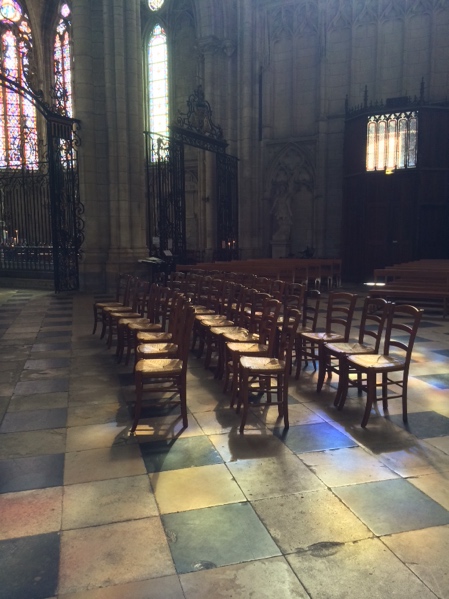 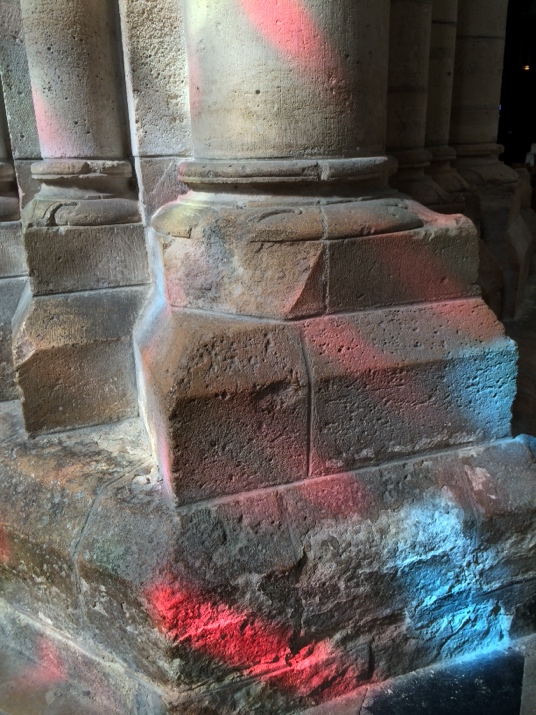 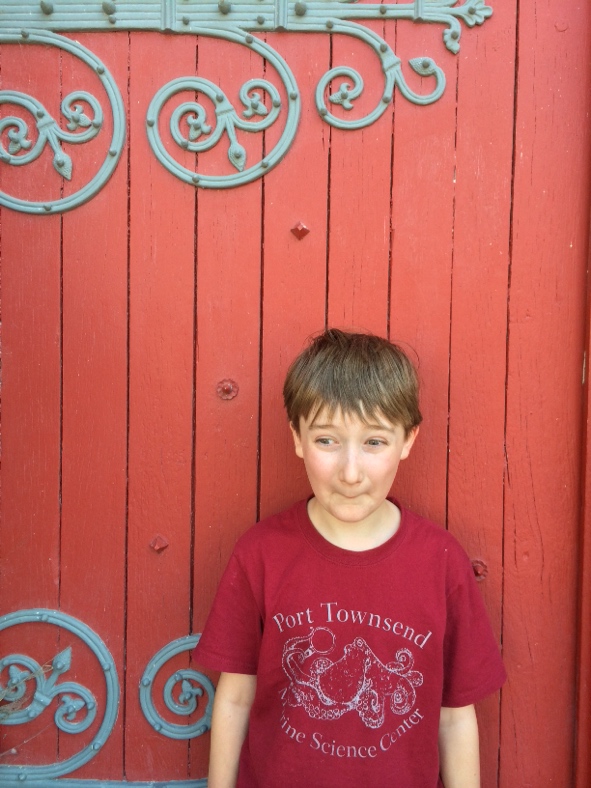 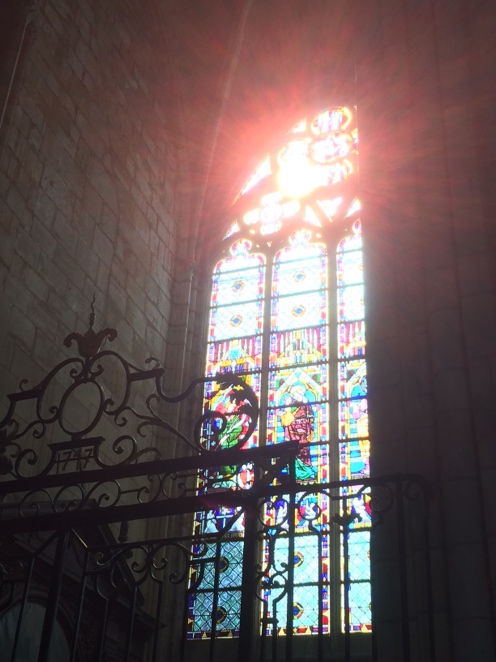 Note- Throughout my blogging, you may notice a lot of pictures of doors…I have a thing for cool doors. 🙂

We picked Jed up at the Villeneuve sur Yonne train station… 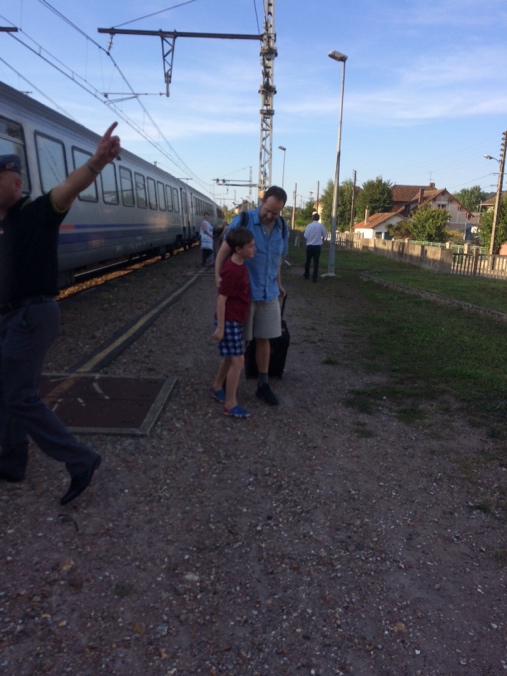 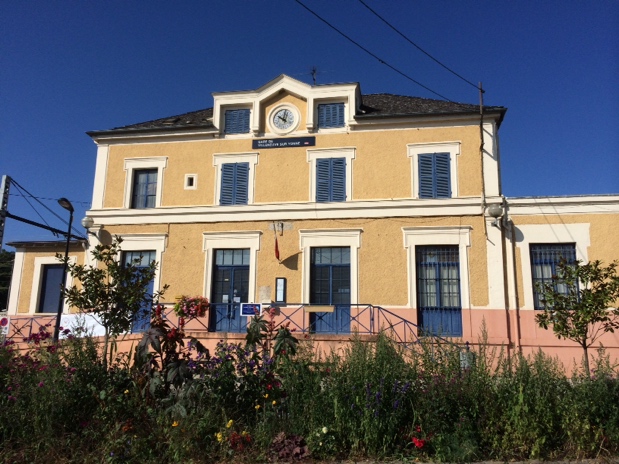 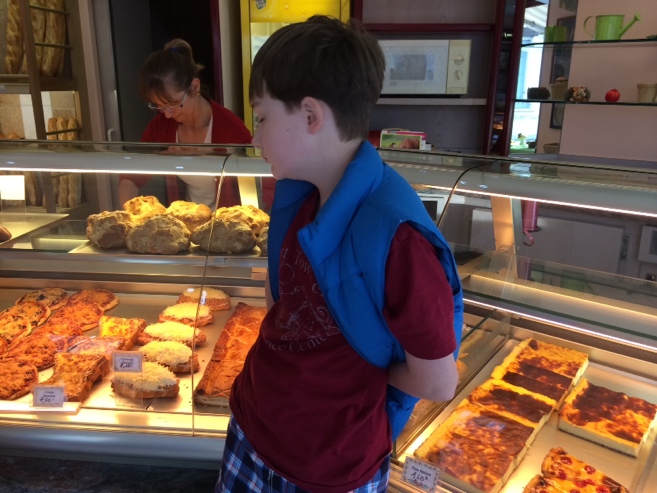 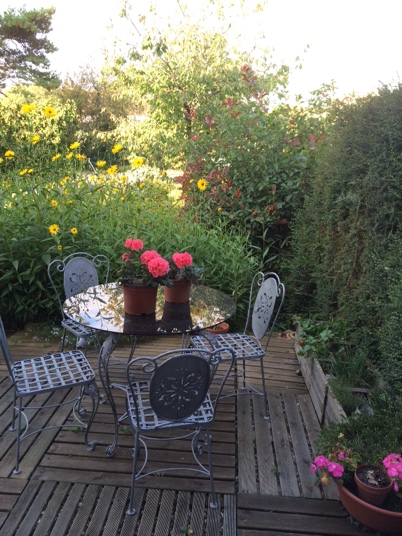 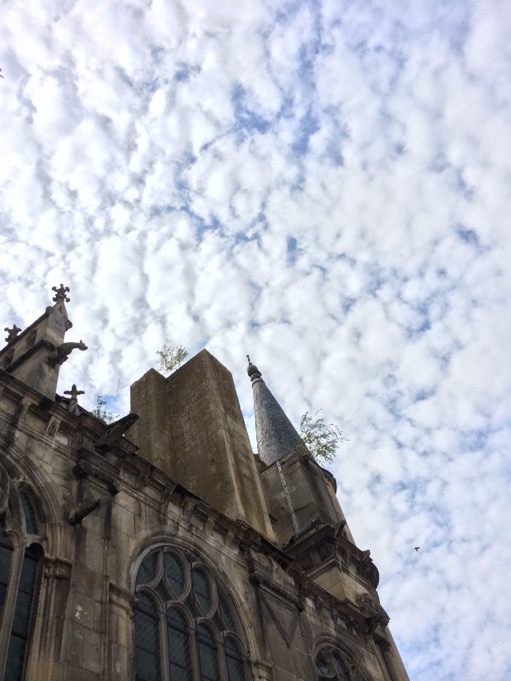 Toward the end of a walk one day, we decided we were hungry. However, in France the restaurants all close after lunch (approx. 2pm) and do not reopen for dinner until 7pm. So, if you find yourselves hungry and in between those hours you can be out of luck. Luckily for us, we stumbled upon a restaurant in town (l’Annex) whose owner was very sweet. He took pity on the wayward travelers and sat us down and promptly served us a lovely meal. Milo took to his dog, Leon. 🙂 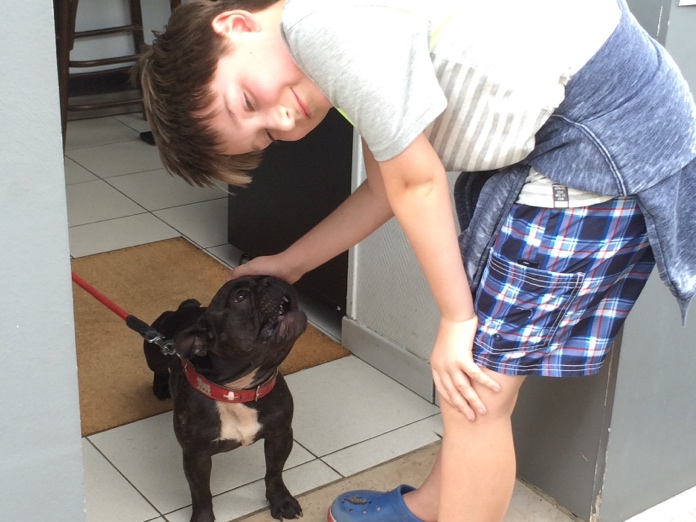 We went back again before the end of our stay and had fondue…geez was it good! 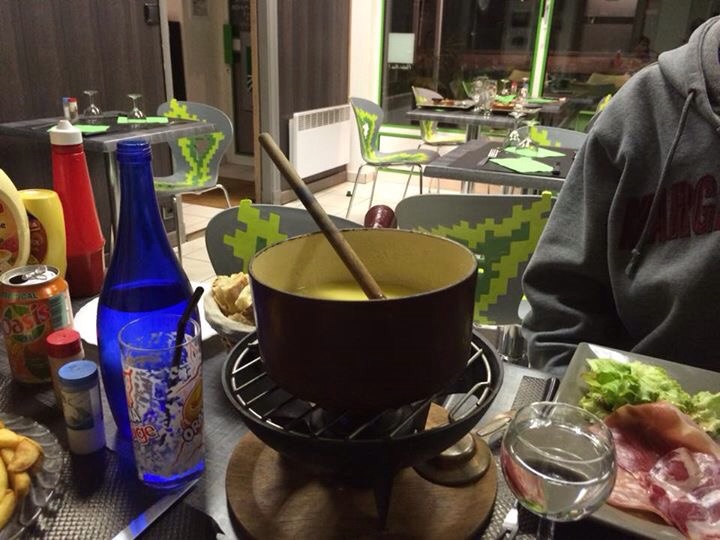 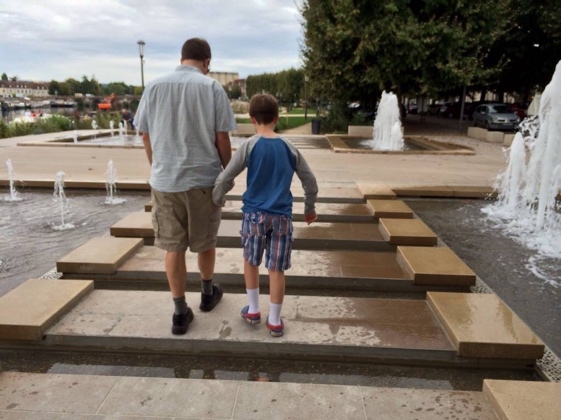 First we had lunch (so as not to miss our window) and then we wondered the streets…we visited two amazing cathedrals.

The first was home to a fantastic (perhaps not quite the right word) room in which we could walk suspended over an archeological crypt, containing tombs from the times of the Roman empire. Whoa. The atmosphere was well beyond my ability to put into words….

On the outside we found chairs that were pretty, but in odd juxtaposition to the surroundings. It was like someone raided a cruise ship and set up chairs in the old cathedral halls…

Next stop was the Cathedral Saint-Etienne- as we stepped in through the gorgeous doors (and these were a side entrance) we were met with organ music.

Yet another day trip we did was to Fountainbleu. An incredible site to see! Home to Napoleon, Marie Antoinette, among many others. Wow. Just Wow.

Milo’s favorite day trip was to Disneyland Paris. We had been before, so we knew what to expect, but there was a new Ratatouille ride at the Hollywood Studios park. It was very well done, though if you’re like me, you might get a little nauseous! We bought an annual pass because we knew we’d be in the area again on this trip. Here’s the deal, if you are going to go to the parks for more than one day it is a better deal to pay for an annual pass, even if you aren’t going to be returning to France again later in the year. The CATCH is you cannot use it for two days after you first use it…so, it worked for us. We went up for a day and then returned at the end of the house sit. Then, in Oct. while we house sit in a Paris suburb, we will have the option to go again!

Another day was spent visiting the town of Chablis. Obviously, famous for the wine that takes it’s name. It’s a small town and the vineyards that can boast the name of Chablis cover a small, very distinct area. We visited Signe Chablis after reading about it on Tripadvisor. (there are many sites available for the traveler of France, but I do tend to fall back on the old standby of Tripadvisor). It was listed as being number one for a wine tasting spot in which one could get small tappas style dishes for a reasonable price.

The place was empty when we arrived as it was between lunch and dinner. The guy who helped us was very nice and spoke English very well, which in this case was great as it afforded us the opportunity to learn about the four different types of Chablis. We tasted some lovely wine and had a plate of local cheeses, bread, and local chautacerie (meats). We also had a nice local salmon pate. Yes, it is possible to get local salmon, as they farm them. We found, of course, that our favorite was the Grand Cru Chablis, which the top two percent of the chardonnay grapes go to make. These are the ones they hand pick at the perfect time. The rest are harvested immediately afterwards by machine.

They are all made from Chardonnay grapes. We ended up buying a bottle of the premier cru that we had tasted. It was 22 euros a bottle, or approx. 30 bucks. Quite a splurge for those of us who normally spend around 10 bucks a bottle…or better yet, go for the wine in a box at about 18 bucks (and it holds about four bottles) as it lasts up to a month so you don’t have to worry about it going bad. The Grand Cru we tried was really lovely but that would have been 38 euros, or 50 bucks. Eek.

That all being said, when one is traveling from place to place and trying to go light, the wine didn’t last long. 😉

It was an exciting time to visit as we happened to be there right in the middle of the harvest. There were tractors driving through the streets pulling loads of grapes or seeds/stems.

Before I move on to our next sit, here are a few miscellaneous pictures from our first ever house/pet sit…

The house, flowers and of course the kitty, Tigress…. 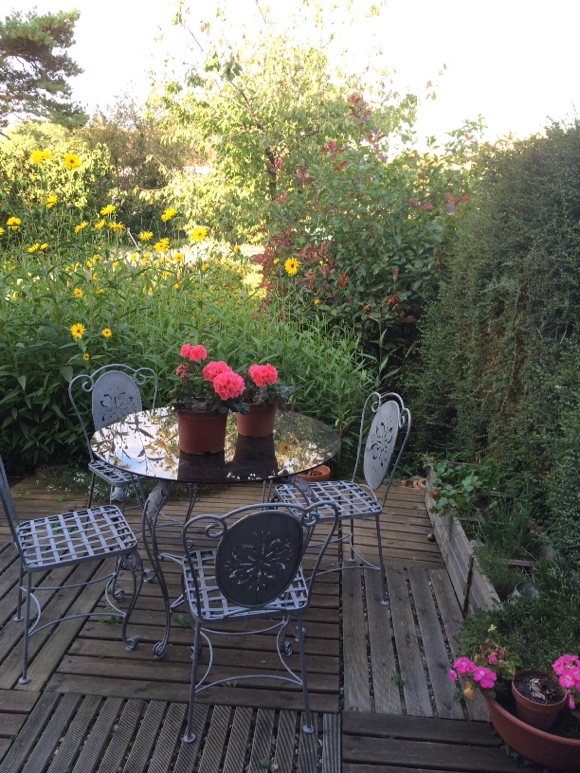 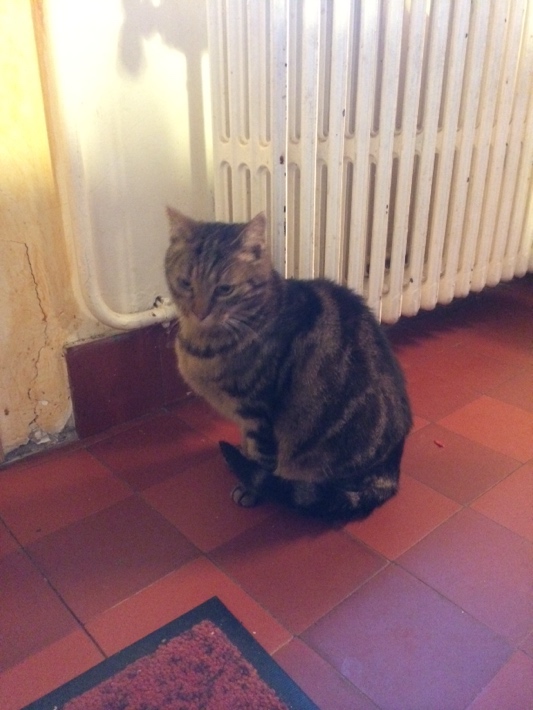 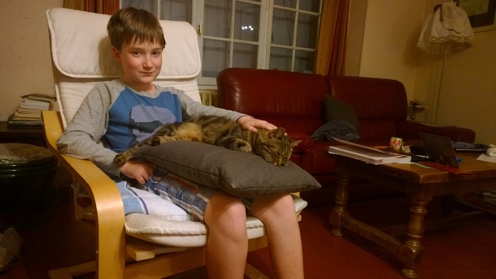 The grocery store…the French REALLY love yogurt! I was thrilled to find vanilla/rice, a flavor that I first found in gelato back in Italy on my trip after college. 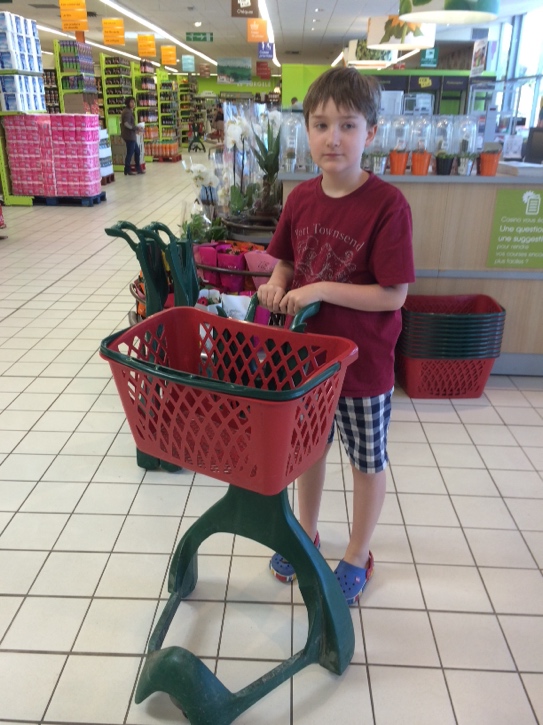 If you are reading this mid trip, here is a link back to the beginning.