Home » Destinations » Old Markets of Nazareth and Jerusalem: An Unconventional Way to Discover the Heart of These Iconic Cities

Old Markets of Nazareth and Jerusalem: An Unconventional Way to Discover the Heart of These Iconic Cities

On the surface, Israel appears to be a land where three major religions and their accompanying cultures collide. It is also where Judaism, Christianity and Islam have contributed their histories, architectural styles, philosophies and cuisines to the vibrant country we see today. But below the surface are traditions, crafts and millions of every-day people. In order to experience the Israel you won’t find in glossy brochures, you need knowledgeable guides who can show you lesser-known aspects of cities like Nazareth and Jerusalem. 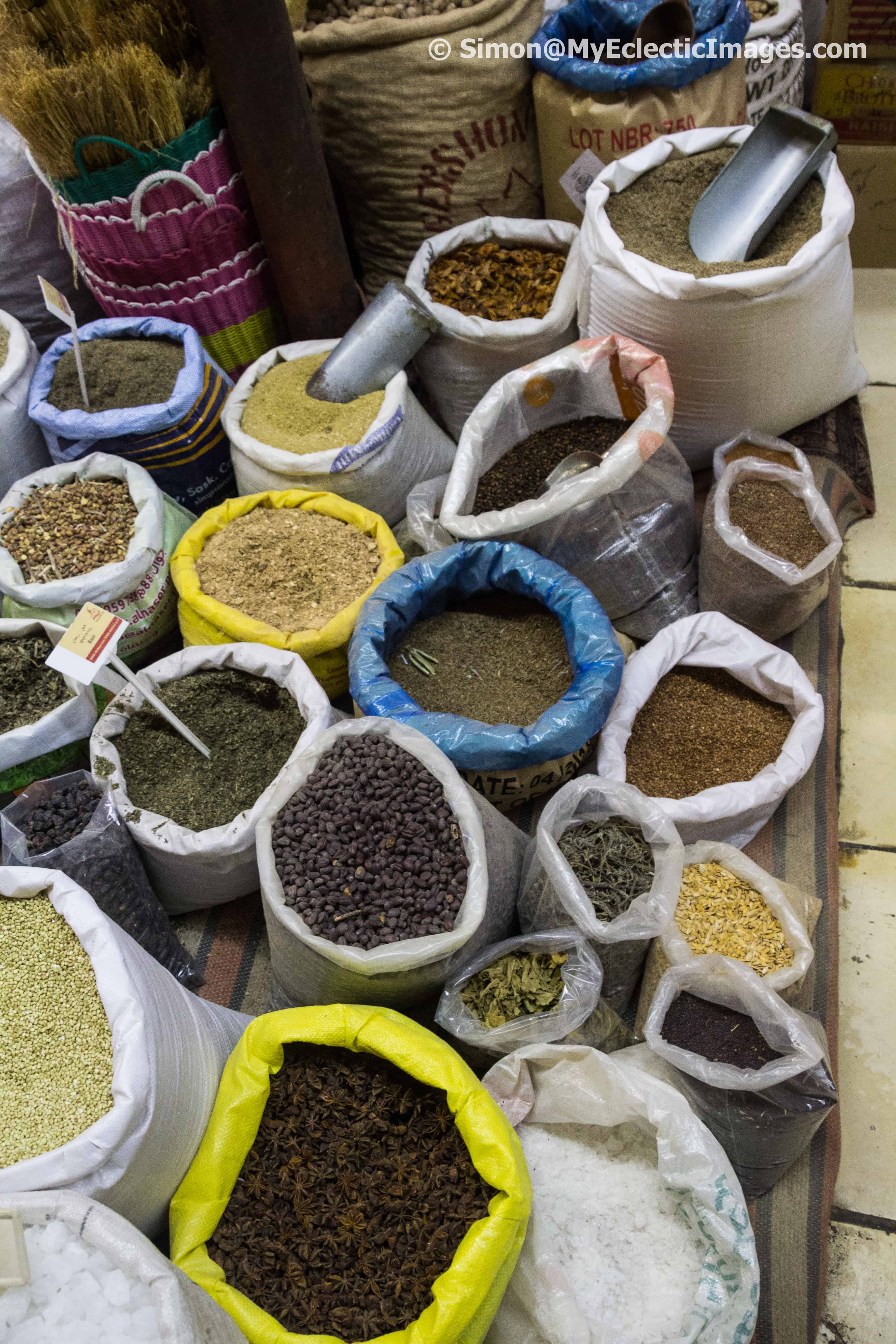 My husband and I were fortunate to have found such guides. And, what we learned on our walking tours brought us in closer touch with the heart of these wondrous cities. No religious sites. No Politics. No trashy souvenir shops. Only people and their commitment to keeping their traditions and values alive.

The Heart of Nazareth

Mona, our guide, proved animated, passionate and outspoken about Nazareth’s Old Market. She met us in the airy, bright common area of the Fauzi Azar Inn, located on a narrow street in Nazareth’s Old City. The inn was built around an open courtyard with Ottoman influences throughout: in the arches, frescos, high ceiling, marble floors, and elegant woodwork. 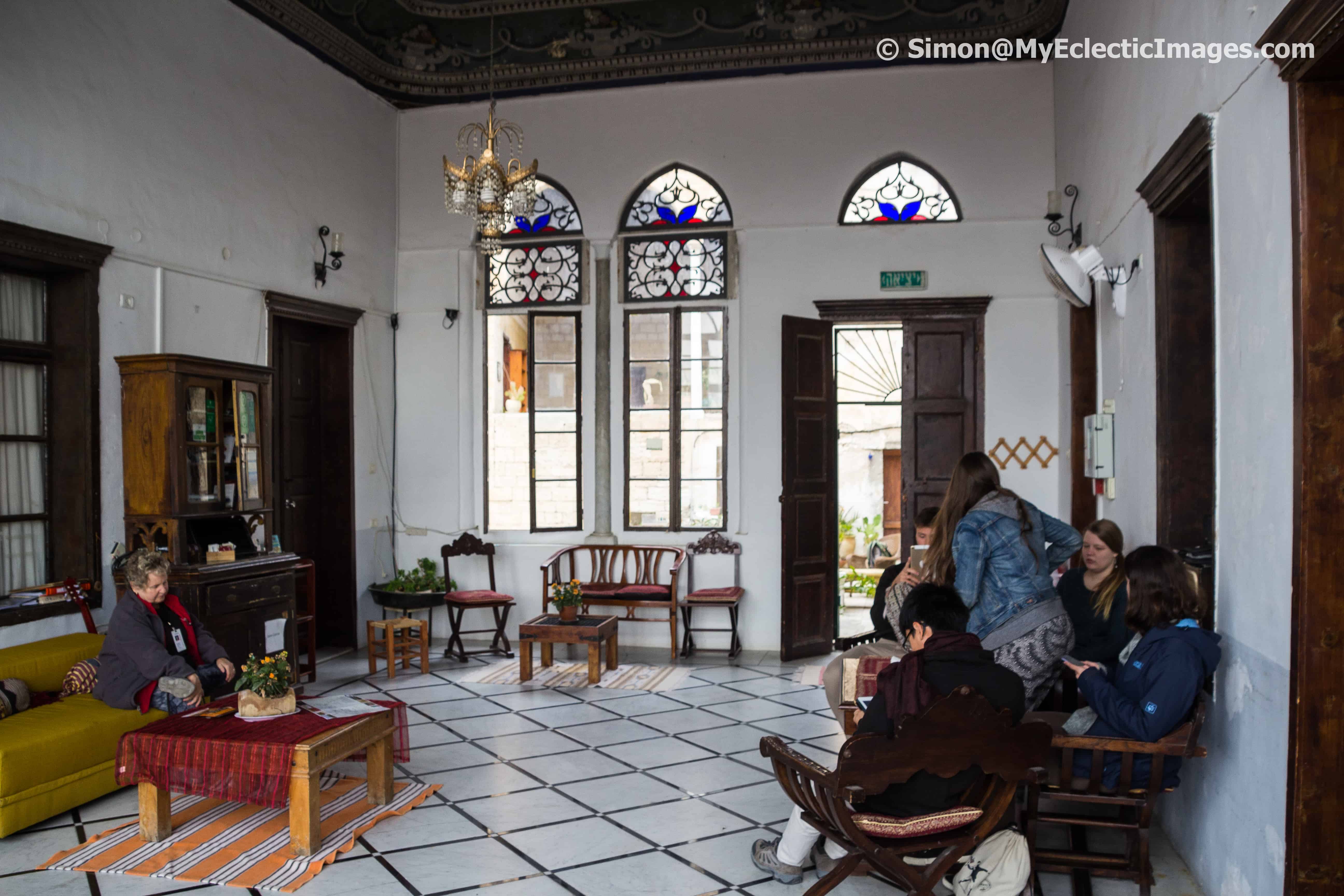 Three massive arched windows opened out on a view of the Old City. Mona ran through the brief, but fascinating story of the mid-19th century Turkish style structure and the family that had lived there. Then, she shepherded us to the shuk (marketplace).

A shuk can be described as an eclectic array of whatever you could possibly want. And this one was no exception. We wandered in and out of shops displaying intricate hand-made lace, natural soaps and shampoos claiming to eradicate all manner of skin and scalp ailments. 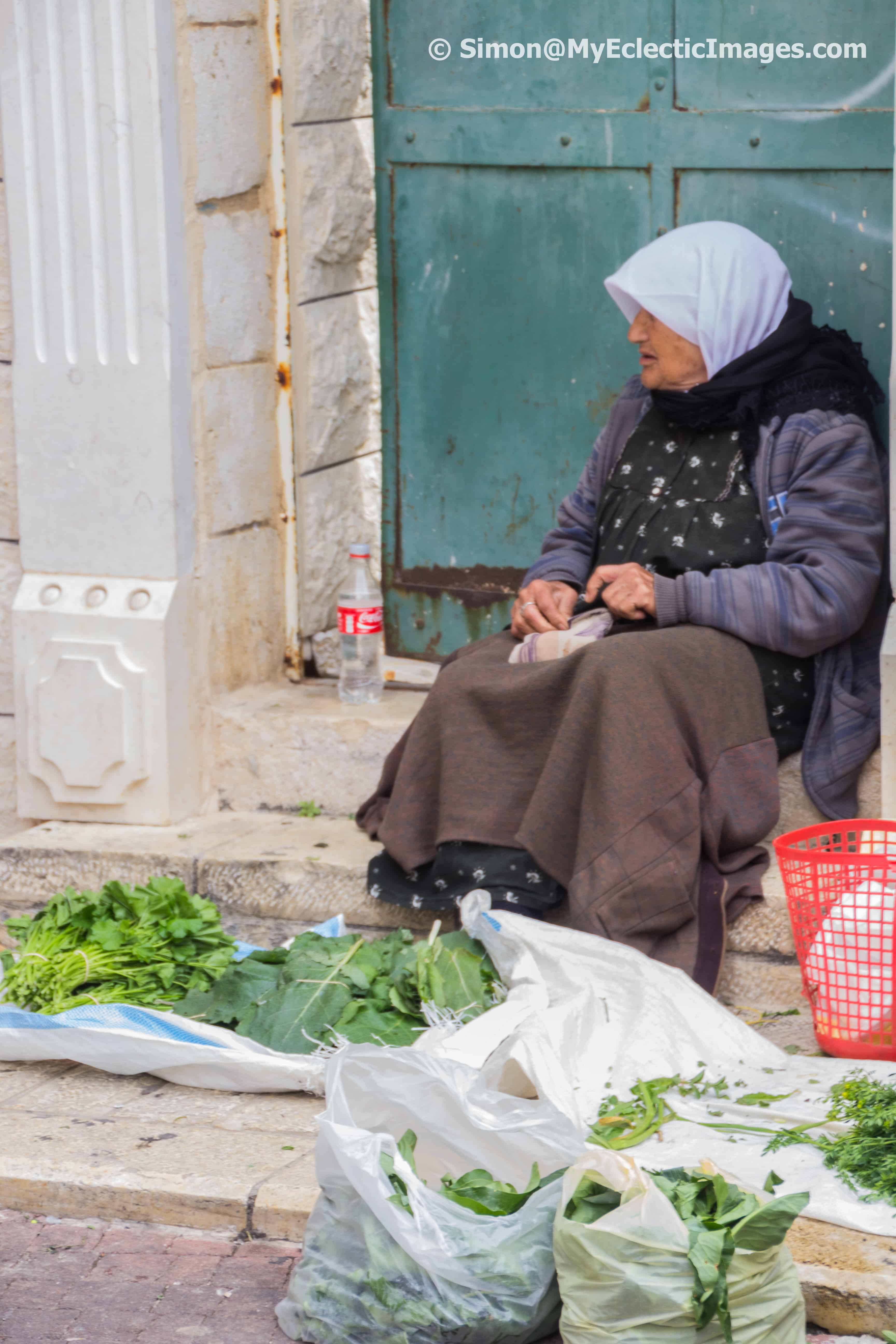 Fresh, colorful locally grown produce beckoned us to wander the vegetable market. Mona recalled how crowded the market had once been with many more vendors, their tables laden with vegetables. This was the point where she began her tale of the decline, rebirth and current malaise of the area.

Early in this century, the shuk area was a haven for druggies, violent criminals and worse. Then the people elected a mayor who turned things around. The area, gradually cleaned up, saw shops, cafes, hotels and hostels opened, welcoming locals and tourists to a safer neighborhood. Sadly, the area is now suffering undeserved fallout from the tensions engulfing the region.

A Past Worth Preserving

As we continued, Mona showed us a well, 23 feet wide and 23 feet deep, now closed for safety reasons. In ancient times the women would gather before dawn to fill their jars before the heat of the day set in, and they had to prepare to go into the fields. This was also their place to gossip.

We stopped at a shop where master carpenters expertly wielded their saws and tools in an effort to preserve a dying art. The building is often mistaken by tourists for a church. It’s a common occurrence for workers to find money left inside the doorway, or someone praying. 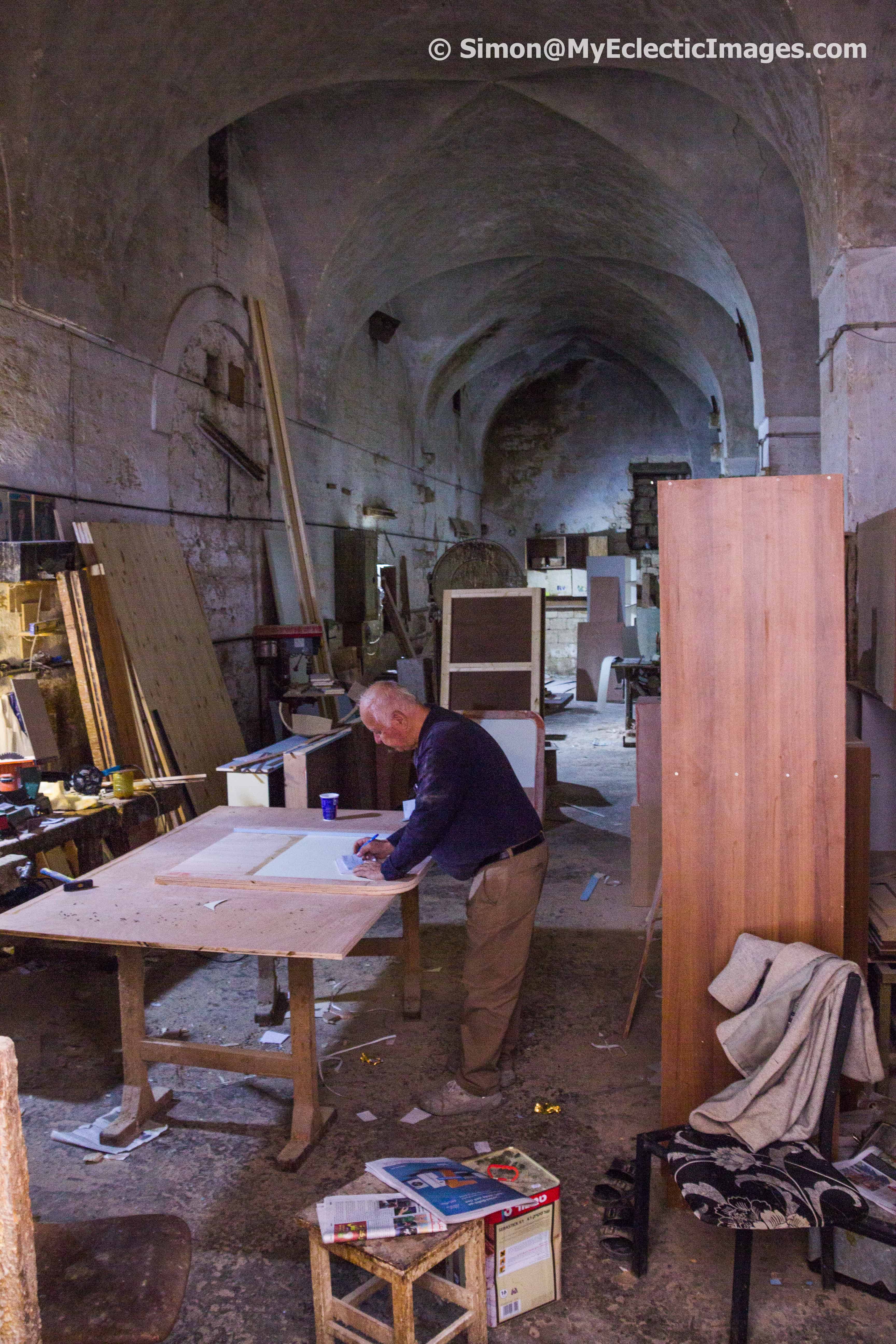 At the first mill of Nazareth, Mona explained the function of 150-year-old machines once used to grind and roast wheat. Newer, more streamlined machines are used today, but the quality of the product is the driving force for the family that owns it.

A Feast for the Senses

At the spice market we ducked through the cloth curtains at a doorway deliberately built with a low frame in order to insure men would bow their respect as they entered. We descended the stairs, and were hit with the intoxicating aroma of nuts, spices and coffee. 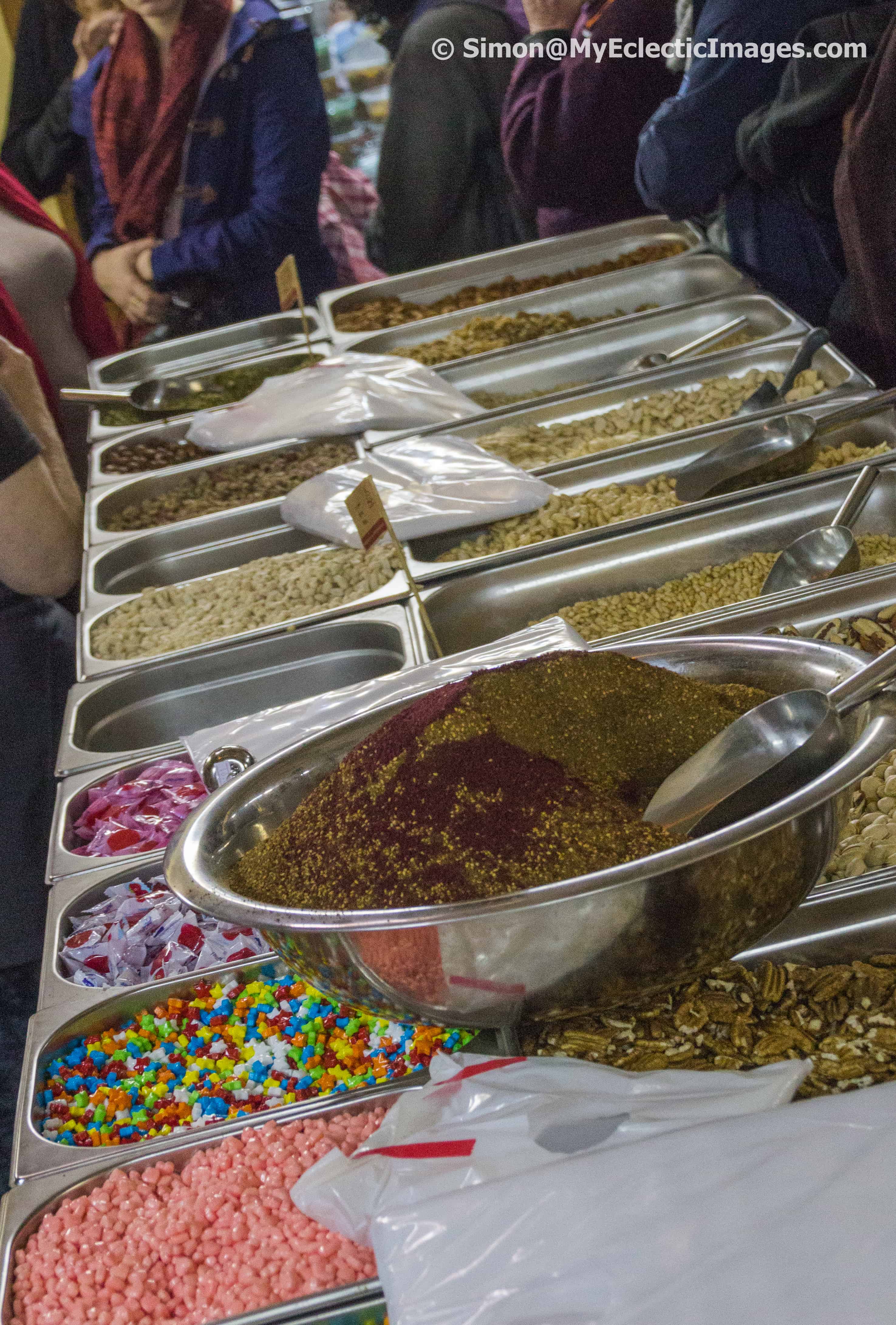 Browsing the mind-boggling selection of whole spices, spice blends, candy, sacks of dried lentils and split peas was dizzying. It became clear that, given the chance, we could have spent several hours and a small fortune in this cook’s paradise. 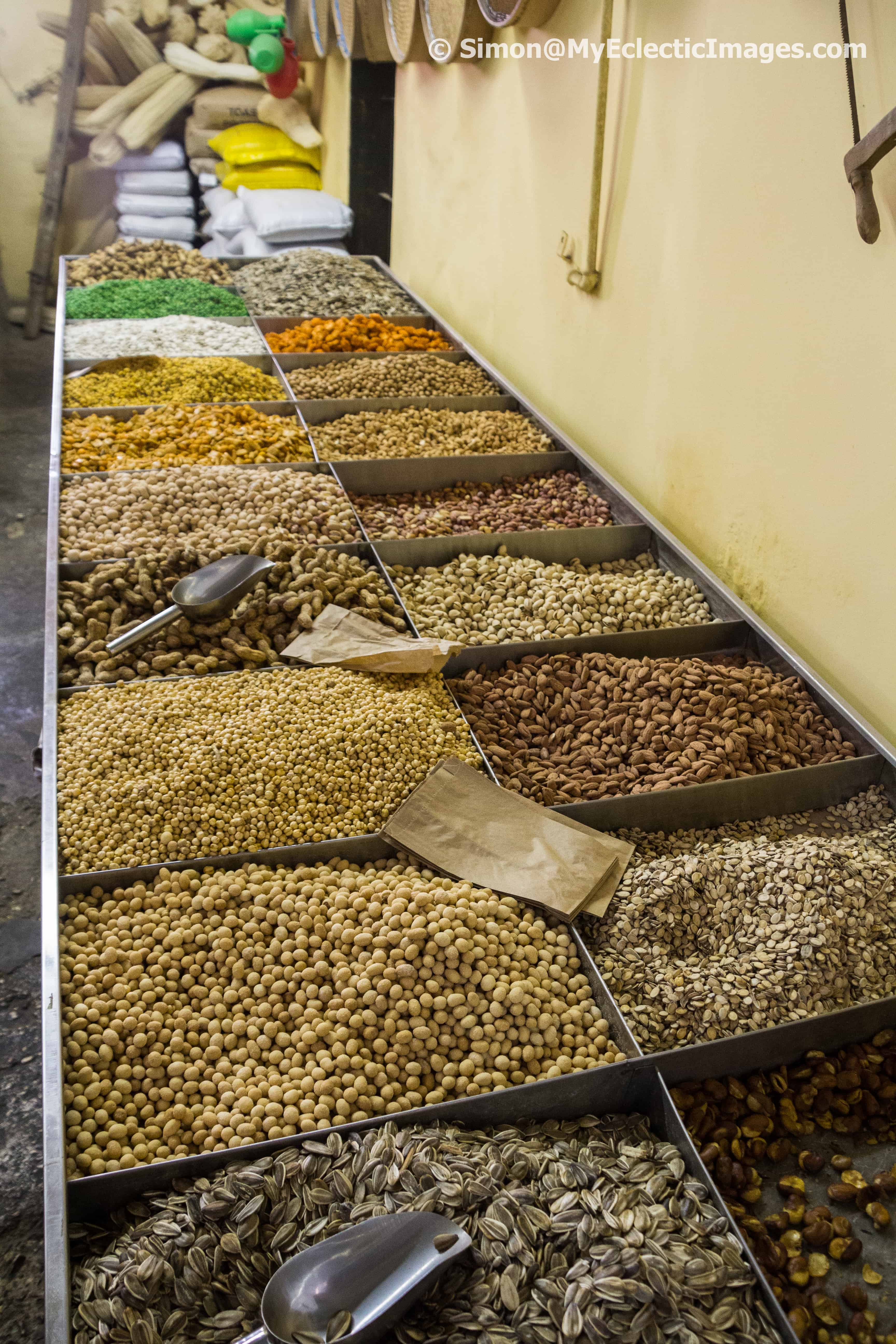 As our tour drew to a close, Mona led us through a small café with intoxicating aromas of another kind, where you could purchase a plate of falafel, pita, and salad for under $4.

Mona isn’t a professional tour guide. She is an accomplished designer and fabricator of modern jewelry. Inviting us into her shop, she closed the door behind us.

Mona spoke with sadness of the difficulties caused by popular misconceptions. She implored us to encourage people to visit the old market area. “It’s beautiful,” she stressed. “It’s safe. There’s no trouble. Christians, Muslims and Jews sit down and eat together. It’s friendly.” The other message Mona wanted us to take home was that there’s much more to see in Nazareth than religious edifices. 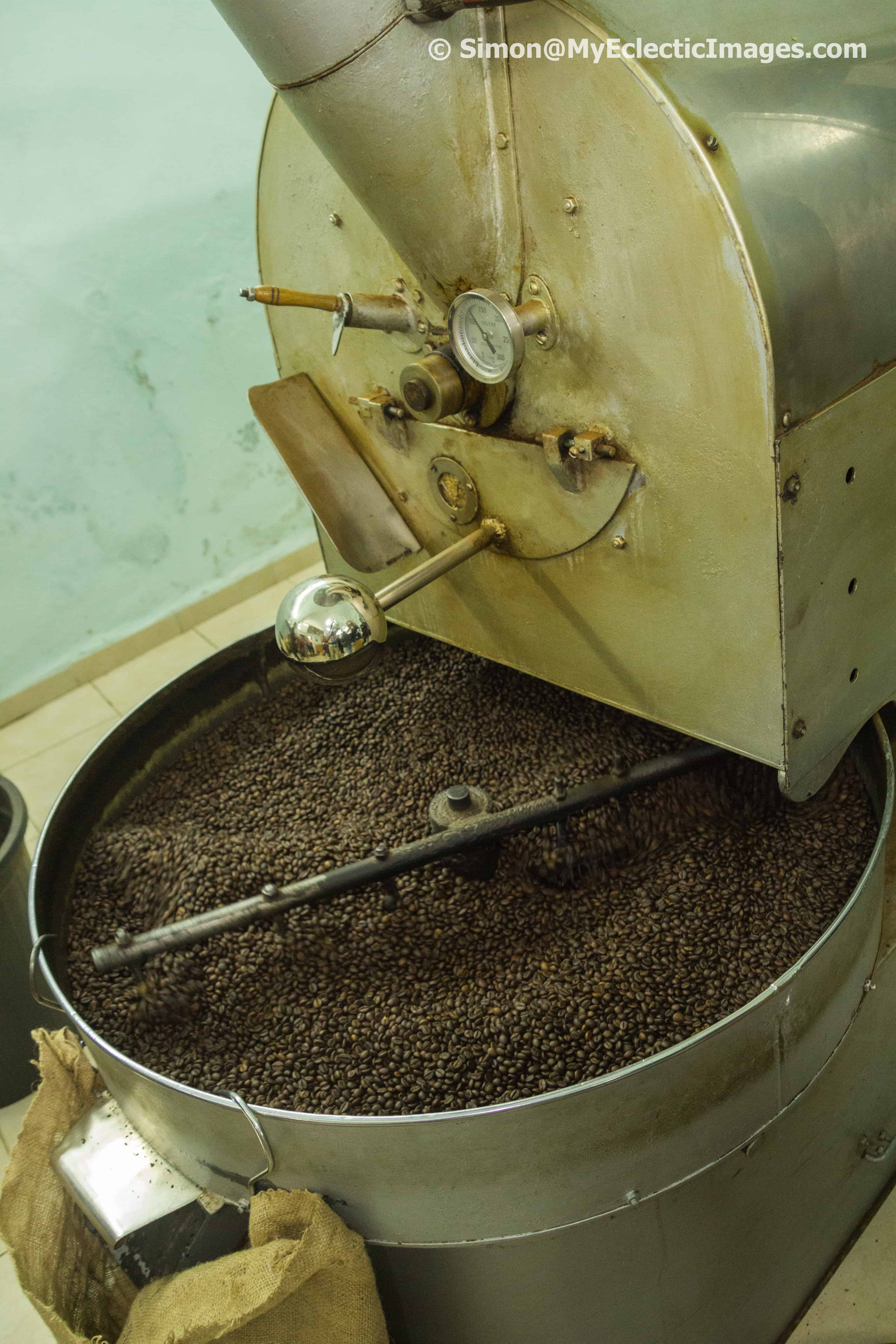 Mona was unabashedly passionate about the area where she lived. After having spent time in Nazareth, I can vouch for the truth of everything she said.

The Heart of Jerusalem

When you enter Jerusalem’s Old City via Jaffa Gate, it’s impossible not to be in awe of the ancient Citadel and Tower of David looming directly in front of you. This was where our Markets & Craftsmen in the Old City tour began. Our guide was Dorit, Director of “Yerushalmit”, offering diverse and colorful tours of the Old City. We were promised a peek into some of the lesser-known areas of the city, and the opportunity to meet some truly remarkable people. On both counts, Dorit over delivered.

Before we could immerse ourselves in the shuk of Old Jerusalem, Dorit wanted to make sure we had a good overview of the area. So we climbed up to the top of the Tower of David. 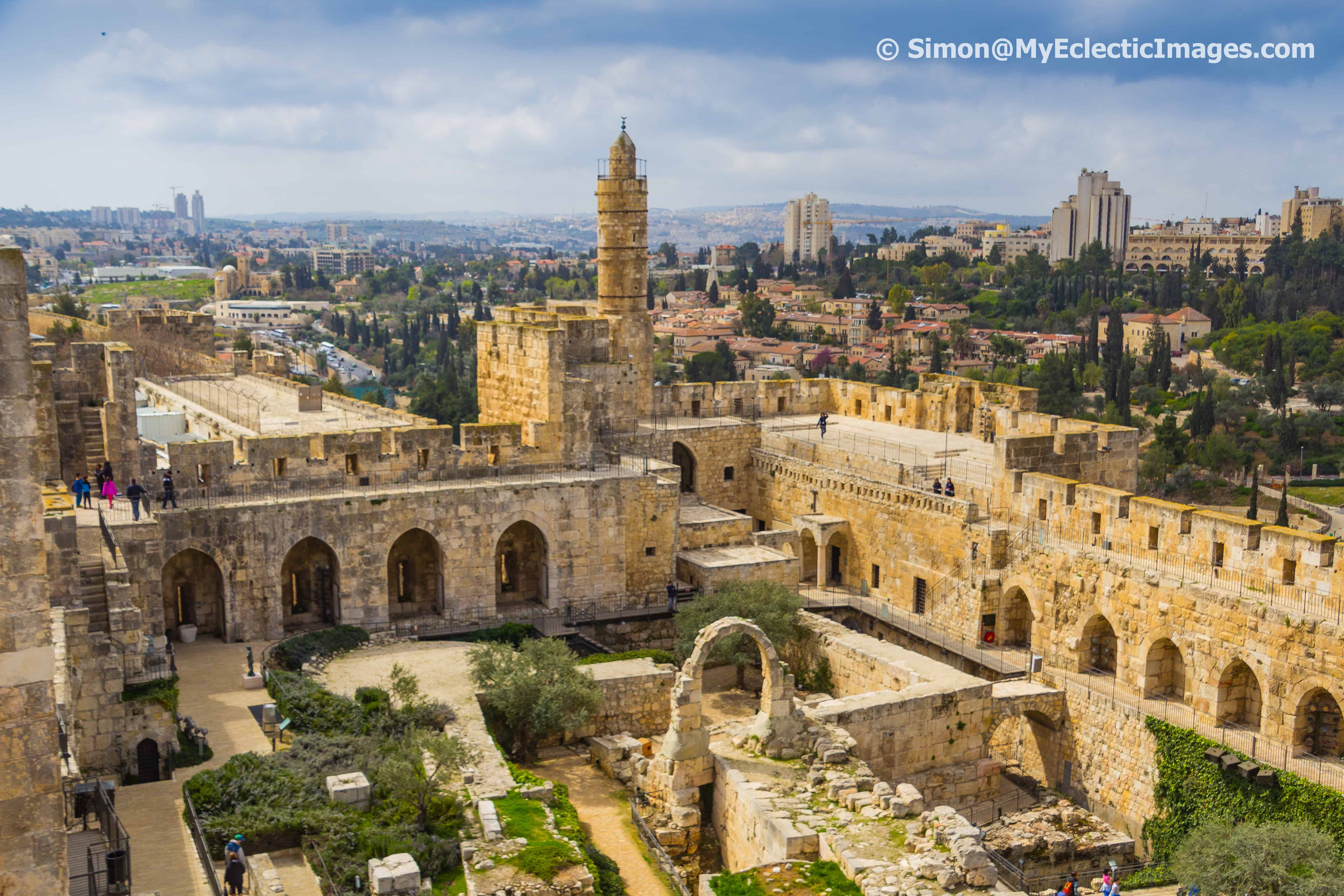 As we took in the spectacular 360 degree view, we could see Mount Olive, sight of the oldest Jewish cemetery in the world, in the middle distance, and the Dome of the Rock in the foreground. As we marveled at the millennia of history before us, a cacophony of church bells rang out, seeming to displace the morning air with its reverent song. This was only one version of the story of Jerusalem. 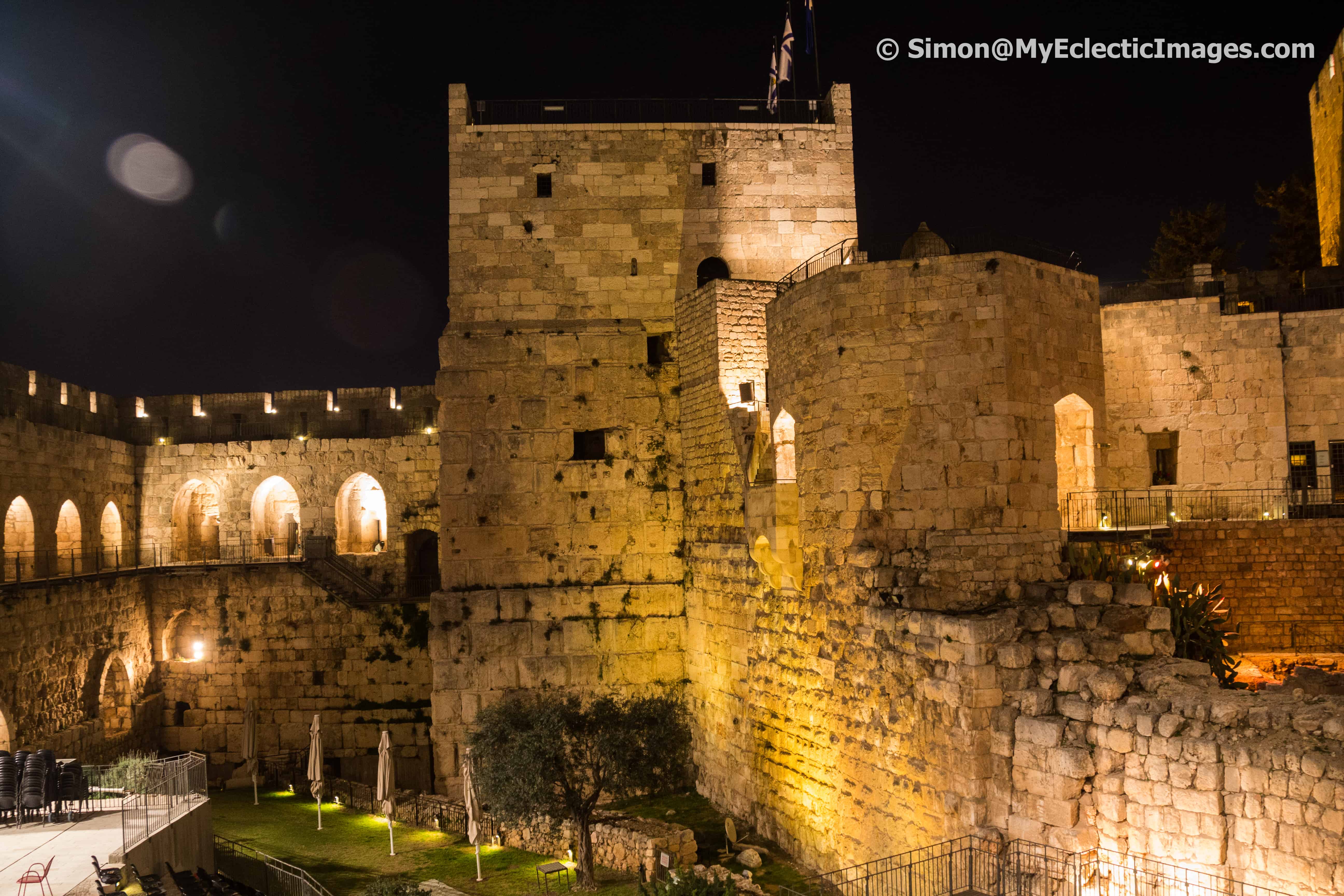 But as Dorit said, “The story of Jerusalem is much more about people than it is about stones.”

A Labor of Faith

At Weaving Creation, Yoseph demonstrated how he wove tallits (or tallises), the traditional prayer shawls worn by Jewish men. It takes approximately 10 hours to complete one tallit. 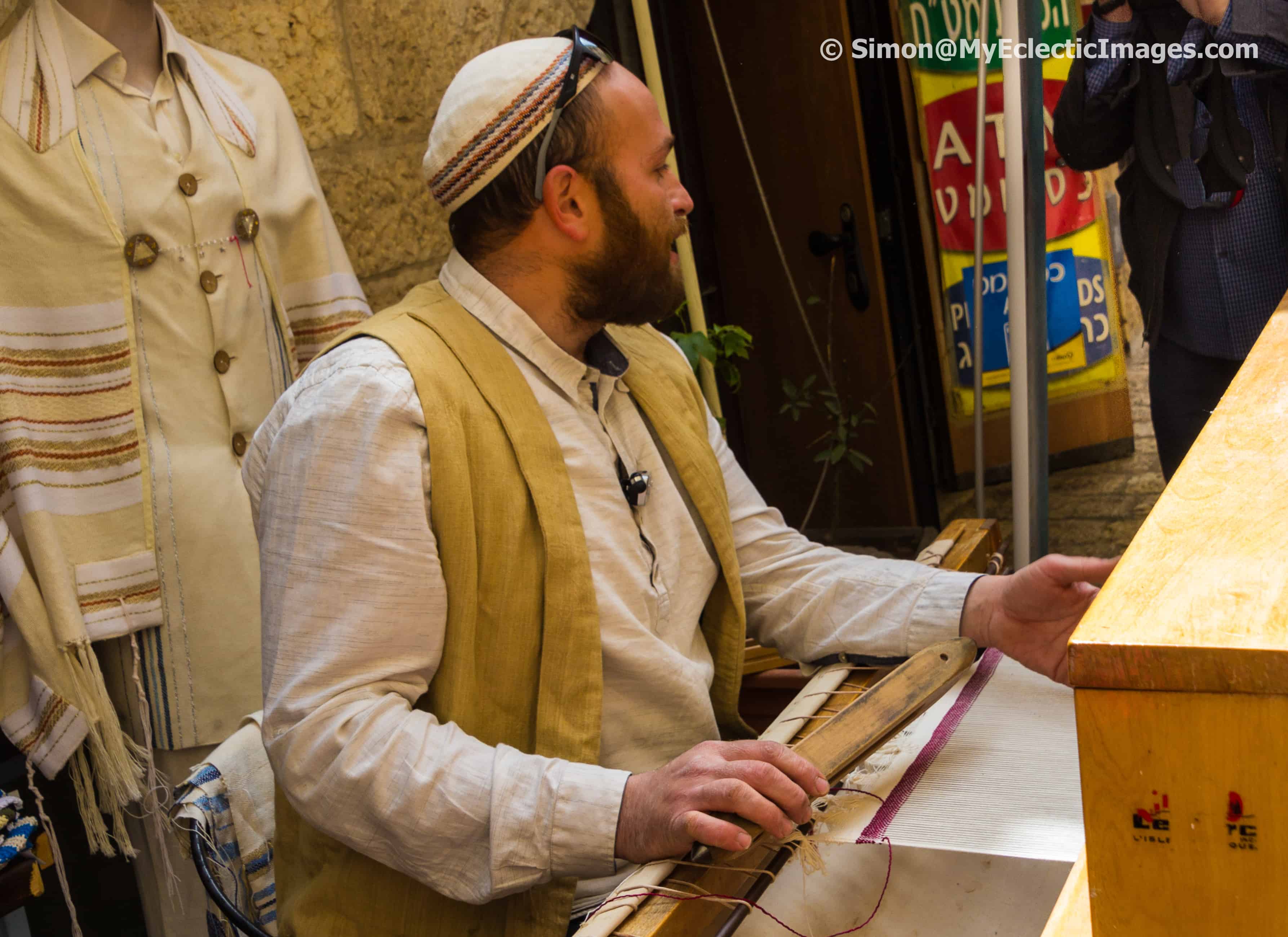 Yoseph spent 10 years in the restaurant business, until he followed his faith and his passion by becoming a weaver seven years ago. As he worked, Yoseph sang. Then he invited me to join him in moving the shuttle. I followed his instructions, and when done, he said, “We wove together. Now you are part of this fabric.”

Our next stop was a painting of Jerusalem in Roman times. The artist connected past and present by adding the figure of a boy in modern dress carrying a backpack and water bottle. The painting was fascinating, but, as with our encounter with Yoseph, what came next was extraordinary. 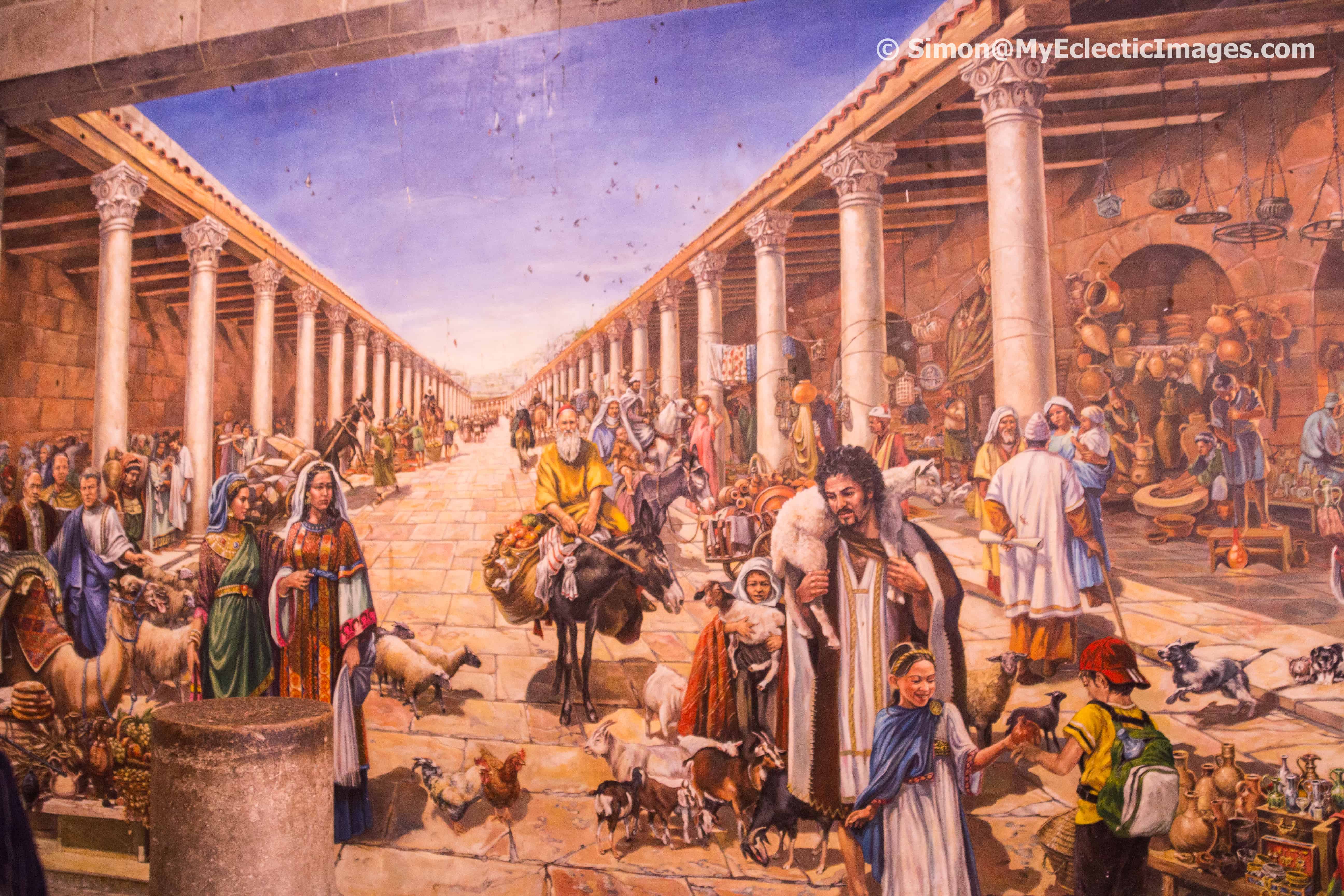 Not your Average Old Relics

Emad, a third generation certified licensed dealer in antiquities, welcomed us to his well-lit shop in which you could easily become lost in time. His inventory spanned the centuries from 4,500 years ago through the Byzantine period.

From ancient pottery to oil lamps, Byzantine glass and Bronze Age storage vessels, you couldn’t begin to guess what historical treasure you would see in the next glass cabinet. Emad documents the authenticity for all items sold in his shop. “Everything here is valuable,” Emad said reverently. “They represent the people and culture of their time.”

Fabric at Its Finest

Bilal imports and sells extraordinary fabrics from Syria, Morocco and other countries for his Christian, Muslim and Jewish customers. 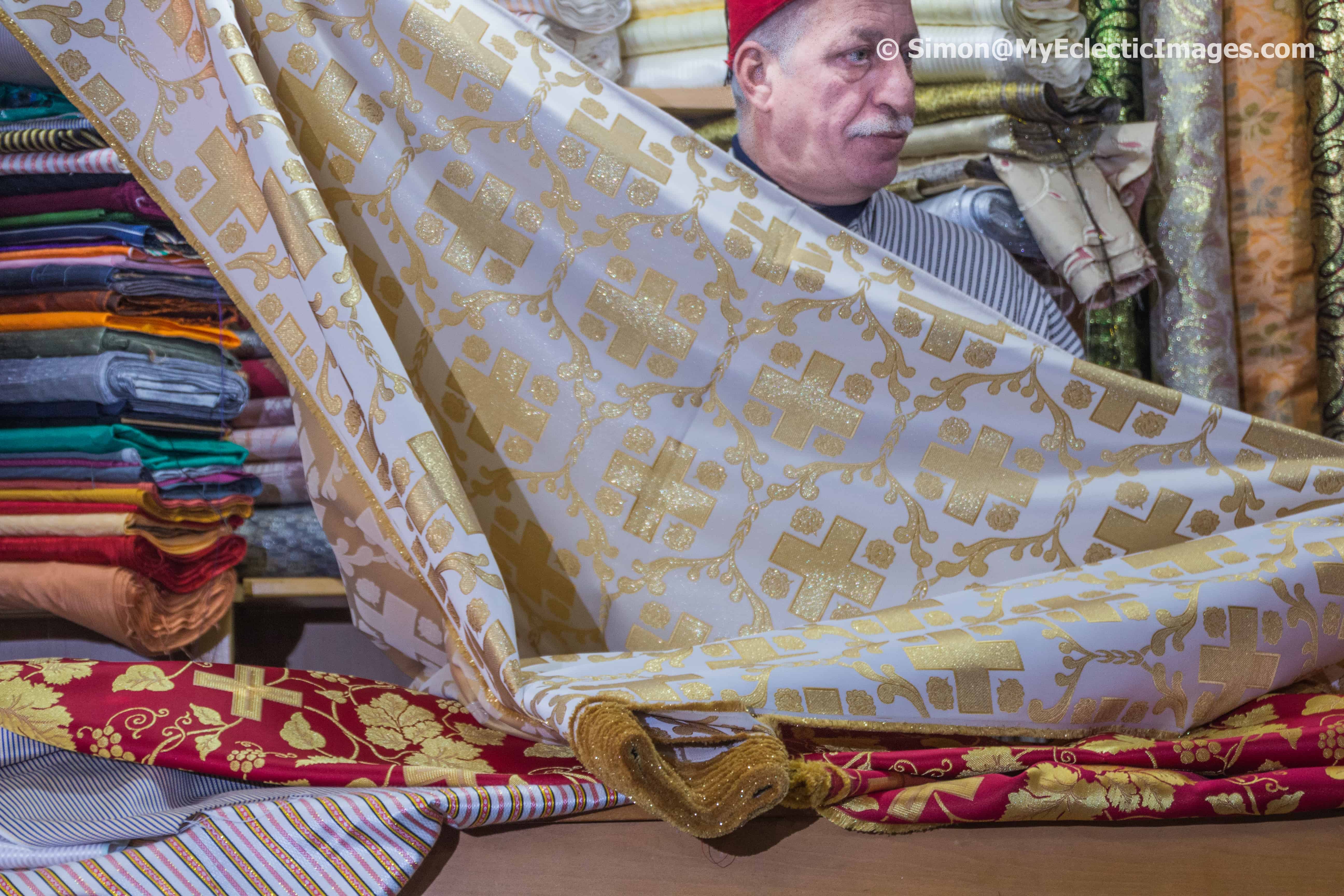 Upon our arrival, Bilal gave a presentation on the type of cloth he sells, and traditional uses for specific fabrics and colors.

We had the opportunity to run our fingertips over pure red silk with 14 caret gold from Palmyra in Syria. But the 18 and 24 caret gold embroidered silk was so valuable, it was kept in a safe. Bilal proudly produced a sample of Burgundy silk embroidered with the precious gold thread and bordered with black velvet for us to admire.

The Art of Tahini Making

Our last stop was a tahini factory in the Muslim section of the shuk. The owner spoke no English, so Dorit translated.

He told us the factory has been in his family for 143 years, but is over 250 years old. His is the only factory making tahini in the traditional way. All other factories use machines.

High quality sesame seeds have their skins removed with water and salt. Next, they are roasted for six hours. Limestones are then used to pulverize the seeds. We sampled the traditional product and then the red tahini produced by roasting the seeds for 8 hours, resulting in an intense flavor. 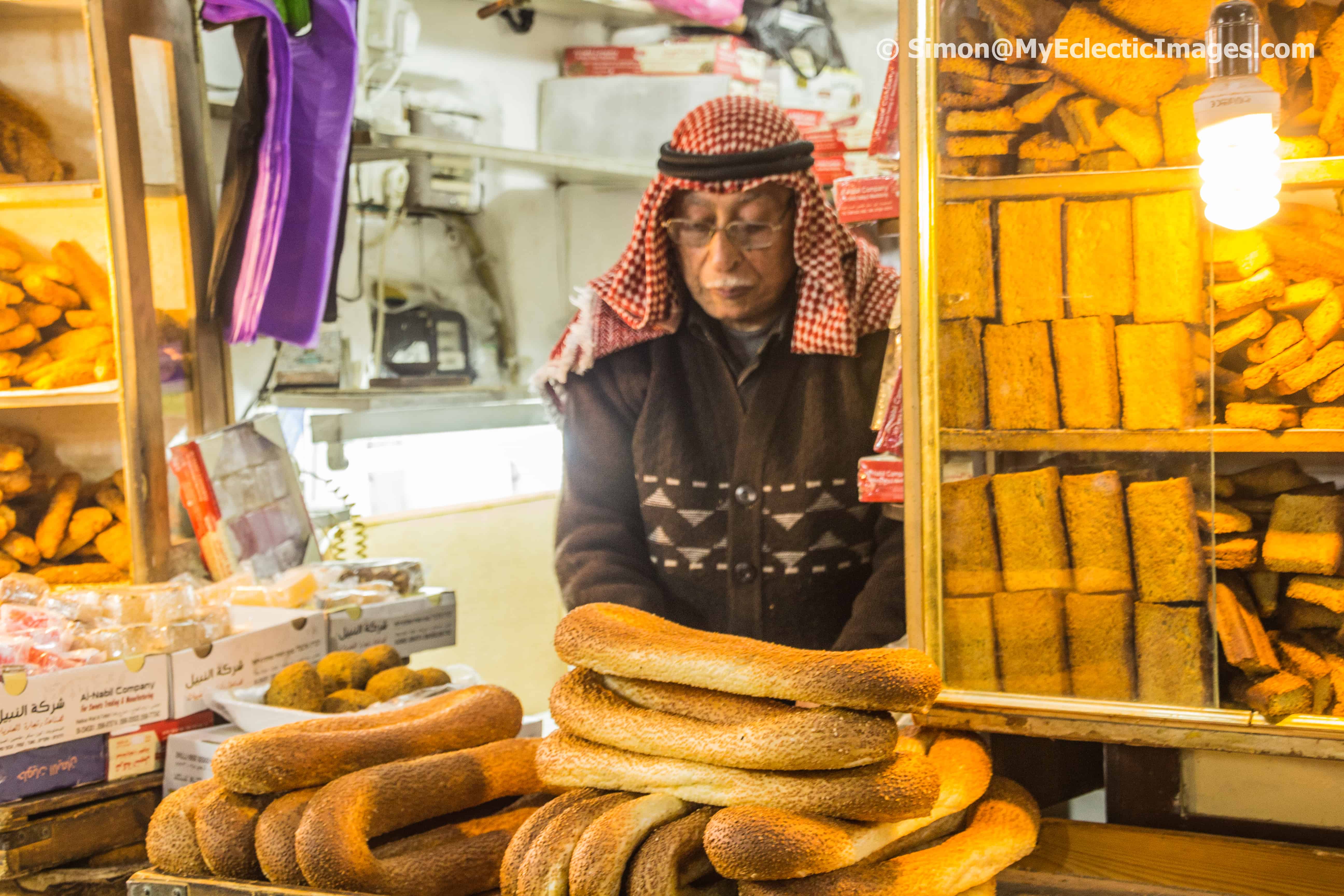 By the end of our tour we were tired, saturated with information and many times richer for what we experienced. Dorit offers the kind of Old Jerusalem tour that you won’t soon forget.

Disclaimer: Our complimentary Markets & Craftsmen in the Old City tour was made possible through the generosity of the Jerusalem Development Authority and Yerushalmit. However, all opinions are entirely my own.