If you love Mark Twain and his writings, have I got a town for you. Located in the picturesque Southern Finger Lakes, Elmira New York is a treasure trove of all things Mark Twain.

A Brief History of Mark Twain

Mark Twain was born Samuel Langhorne Clemens in Florida, Missouri. When his family moved to Hannibal, young Sam found inspiration in the Mississippi River, which would ultimately lead to the creation of some of the world’s most beloved classics.

Twain’s love affair with Elmira began in 1867 on the steam ship, the Quaker City. He was on assignment for a California newspaper to write a series of stories about the Holy Land. It was on this voyage that Twain met Charlie Langdon, a 17-year-old homesick lad from the Southern Finger Lakes. Charlie showed Twain a photograph of his older sister, Olivia, and it was love at first sight.

Unfortunately for Twain, the same wasn’t true for Olivia, and it took the love-struck writer more than one proposal to win her over. Although theirs was a life-long romance, the Clemens’ were plagued by tragedy in the form of the loss of their son, Langdon and daughters, Susy and Jean. The couple had one surviving daughter, Clara.

The family lived in Hartford, Connecticut, the then literary capitol of the world, But for 20 summers, they stayed at Quarry Farm, owned by Olivia’s sister, Susan Crane and her husband, Theodor. There Twain wrote many of his most famous novels and stories.

When Olivia passed away in 1904 at 59, Twain was inconsolable. He became somber, and so did his writing. Haley’s Comet was in the sky the summer of 1839, when Twain was born, and again in April 1910 when he died. In typical Twain fashion, he is reputed to have said he would have been extremely disappointed if he didn’t go out the same way he came in.

A Family History in Stone

My husband and I began our Mark Twain odyssey at Woodlawn Cemetery, where Mark Delgrosso, Professional Tour Guide with Mark Twain Country Tours greeted us. Mark Twain is buried with Olivia, their children, and in-laws. As we wandered, Mark pointed out specific graves.

The Langdon family was wealthy, but Twain was already earning well from his writing by the time he married Olivia. Nevertheless, his father-in-law, Jervis Langdon purchased the couple’s first home in Buffalo, along with a small newspaper for Twain to run. 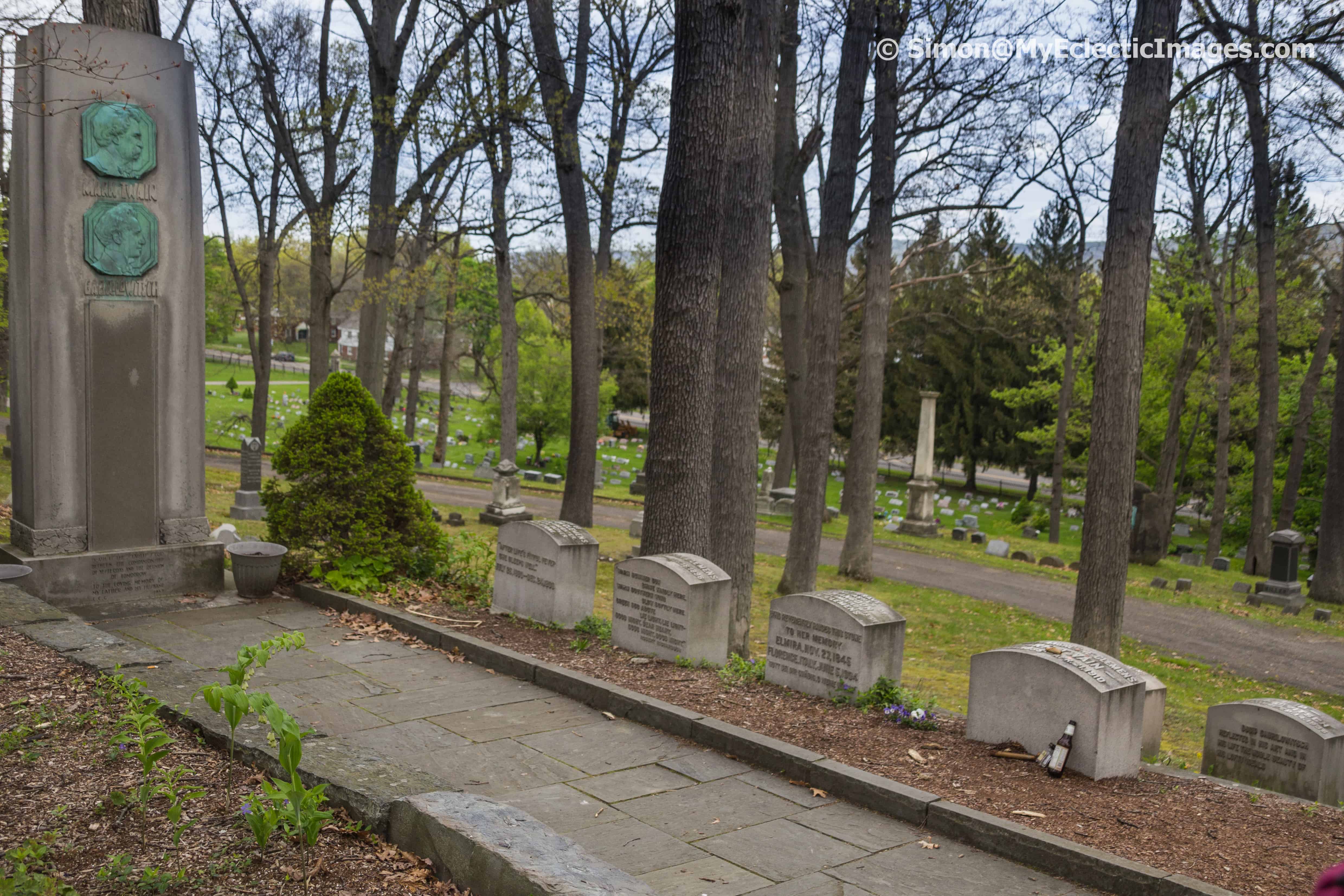 Shortly before their move to Hartford, their son, Langdon, died at 18 months of diphtheria. But Twain blamed himself because he had let the baby’s blanket blow off during a carriage ride. Standing at the simple graveside of this tiny child was like coming face-to-face with every parent’s worst nightmare.

At Charlie’s grave, Mark told the story of that fateful voyage where he unwittingly made his sister Twain’s heart’s desire. And so it went, grave after grave, story after story, until we felt as if we had known these people personally. 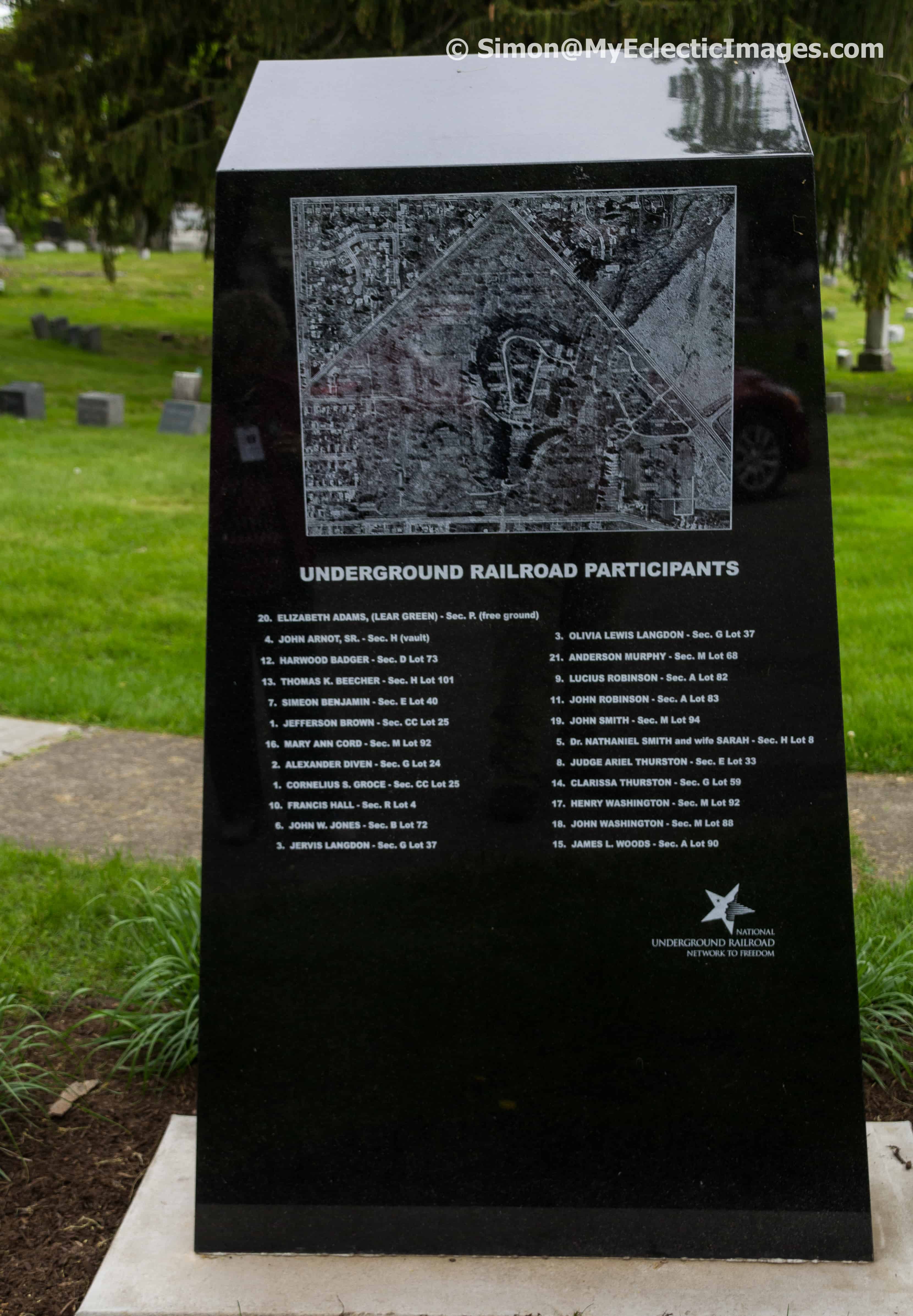 From this accomplished storyteller we learned of Jervis Langdon’s involvement with the Underground Railroad before and during the Civil War. His father-in-law’s values had a profound effect on Twain, and he supported similar causes such as women’s rights.

Mark Twain’s is the 10th most visited grave in the world. His admirers leave him cigars, whiskey and other gifts.

Clara erected a 12 foot granite monument in honor of her father and husband. She had married an Austrian composer who adored Twain. His wish was to be buried at the feet of his beloved father-in-law. The height of the monument is significant because 12 feet equals 2 fathoms, which in nautical terms is “mark twain”.

Twain bore more than his share of undeserved guilt. Not only did he blame himself for his son’s death, he believed his influence caused his brother, Henry, to die in a boiler room fire aboard a Mississippi river boat. But family tragedies continued long after his death.

Clara’s daughter, Nina, died of a drug overdose in 1966. It would appear that Samuel Clemens’s bloodline ended with Nina’s death, but in a recent twist worthy of a soap opera, an alleged Mark Twain great granddaughter has now appeared.

Susan Bailey claimed to be Nina’s illegitimate daughter in her 2014 book, “The Twain Shall Meet: The Mysterious Legacy of Samuel L. Clemens’ granddaughter, Nina Clemens Gabrilowitsch”. Mark read the book, and believes Susan may be the real deal, based on what he knows of Nina’s tragic life. Perhaps time and DNA testing will tell.

At Elmira College, we met Dr. Joseph Lemak, Director of the Center for Mark Twain Studies. Our first stop was the octagonal wooden study where Mark Twain wrote “The Adventures of Tom Sawyer”, “The Adventures of Huckleberry Finn”, “Life on the Mississippi”, “A Connecticut Yankee in King Arthur’s Court”, “The Prince and the Pauper”, “A Tramp Abroad,” as well as numerous short pieces.

The studio was approximately 12 feet in diameter, with a peaked roof, spacious windows and a massive stone fireplace directly opposite the doorway.

When Twain and his family first began spending summers at Quarry Farm, the author did his writing in the house. Susan, who intensely disliked Twain’s cigar smoking, had the studio built as a surprise for Twain in 1874. It was 100 yards from the house, perched on a knoll overlooking the stunning Chemung River Valley. This banished the smoke from the Crane house, and gave Twain a tranquil place in which to work.

The study was moved from its location on Quarry Farm to the campus of Elmira College in 1952. This made it accessible to the public while protecting the privacy of the farm’s occupants.

After leaving the studio, Joe ushered us to Cowles Hall and the Mark Twain Exhibit in the Center for Mark Twain Studies. The center was established in 1983, when descendants of the Langdon family bequeathed Quarry Farm to the college. The bequest had one stipulation: the farm remain closed to the public, and that it be use to host visiting Mark Twain Scholars.

Cowles Hall was the entire college – dorms, classrooms, cafeteria – when it opened as Elmira Women’s College in 1855. It was the first college in the country to grant women degrees equal to those given to men. 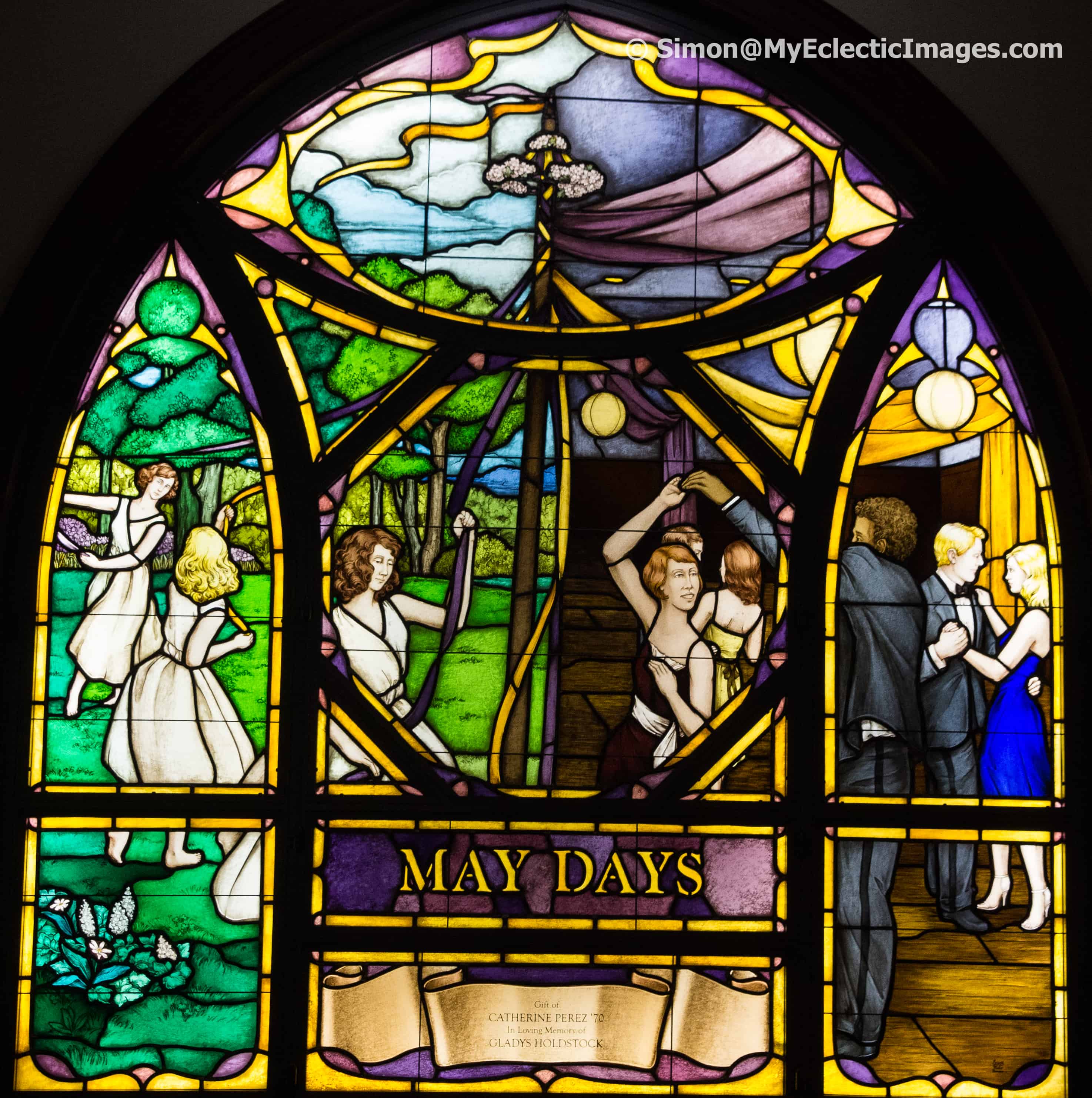 On the ground floor of the recently renovated building, we were immediately drawn to the chapel with its magnificent large stained glass windows. They depicted college activities such as May Day and commencement, as well as representations of Samuel and Olivia Clemens. The brightly colored glass cast its light throughout the entire chapel. 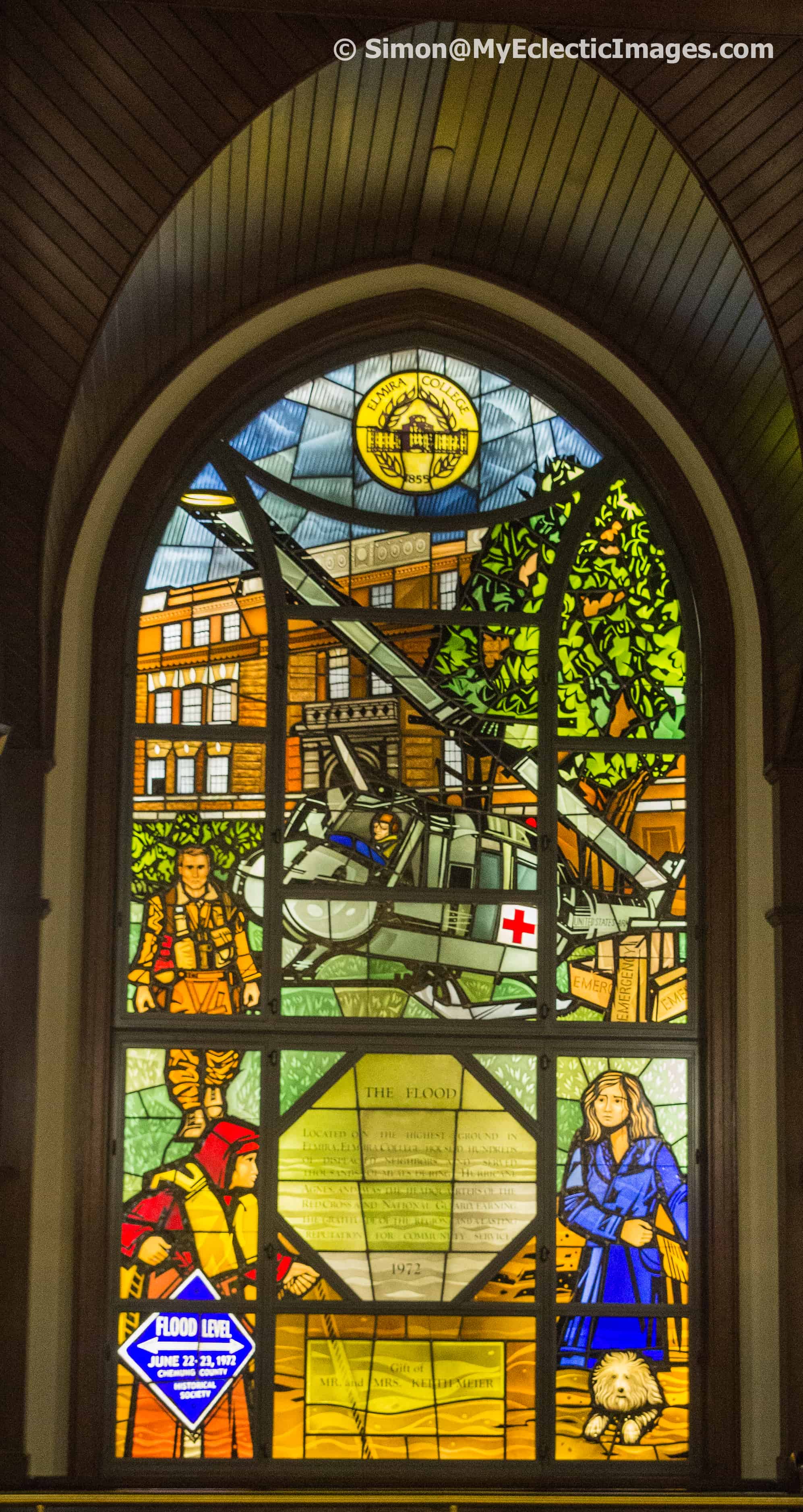 But our time was short, so we resisted the temptation to linger, and moved on to the Mark Twain Exhibit. Half of the exhibit area was dedicated to the Langdon mansion. Photos showed Victorian style clutter from around the world, filling every available space in the house.

The room contained pieces of original furniture, a sample of the iron fencing surrounding the college brought from the Langdon mansion and first editions of Twain’s books. 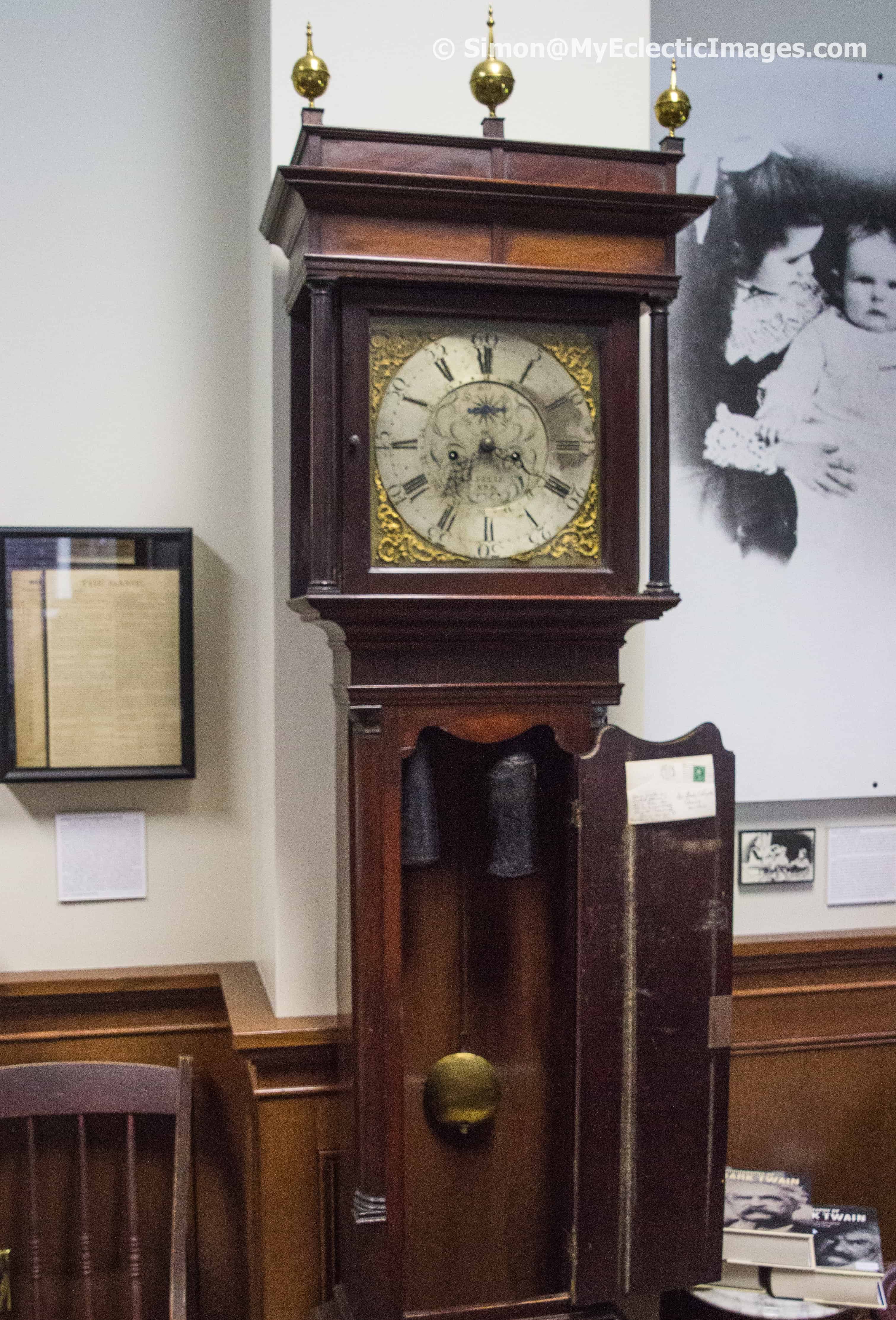 The second half of the room was dedicated to Quarry Farm. One picture showed the front porch of the house and the study in the distance.

Our entire experience was all too short. There is much more to see and do in Elmira. And it will be a pleasure to return and take up the Mark Twain trail where we left off.

Woodlawn Cemetery is the nearly 200 acre site of approximately 90,000 graves, including those of Samuel Clemens (AKA Mark Twain) and his family. While there, take the opportunity to visit the Historic National Cemetery, located within Woodlawn. On this site, nearly 3,000 Union and Confederate soldiers who fought in the Civil War are buried.

The Mark Twain Country website has a comprehensive listing of Mark Twain related sites and attractions in the Elmira area.

The Center for Mark Twain Studies is wheelchair accessible, but the entrance may be hard to identify. Calling for information on the exact location is advised.

The Mark Twain Study, located on the campus of Elmira College, is open to the public
free of charge. Tours of the study are available by appointment through the Center for Mark Twain Studies, October 15 to May 1. Be aware, however, the Study isn’t heated.

May 1 to Labor Day: Hours are Tuesday through Saturday, 9:30 AM to 4:30 PM, and closed Sunday and Monday, as well as Elmira College holidays

Although Quarry Farm is closed to the public, a virtual tour is available through the Elmira College website.

Disclaimer: Our visit to Elmira was made possible through the generosity of Corning and the Southern Finger Lakes and Chemung County Chamber of Commerce. However, all opinions are entirely my own.