Home » Destinations » Lake Charles: A Feast for the Senses

Lake Charles: A Feast for the Senses

It’s no secret that Louisiana is bursting with exotic flare. A hearty helping of French history, sprinkled with Caribbean flavors, and triple-dipped in Spanish, Native American, and African lore, it’s an enchanting atmosphere like no other. And Lake Charles, anchored along the Gulf Coast in the Southwest corner of Louisiana, joyfully embraces this savory culture.

Things to Do in Lake Charles

The heart and soul of Southwest Louisiana’s colorful customs are found in the lay of the land. Moss-shrouded bayous melt into murky, slow-moving rivers and tributaries teeming with life. A few miles south, sprawling fresh water marshes dissolve into brackish lakes and finally into windswept coastal prairies before opening onto the Gulf of Mexico. 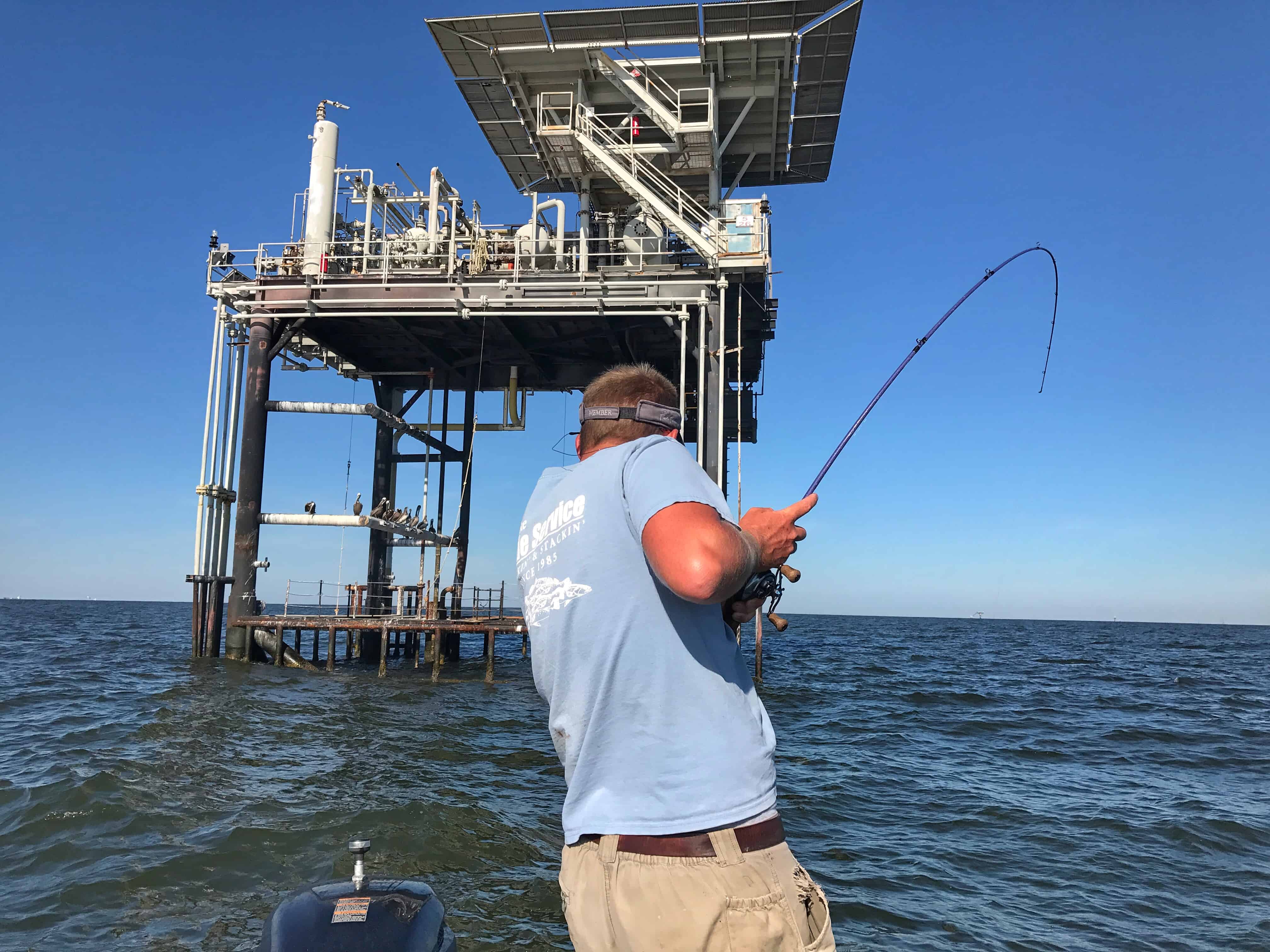 Long-legged wading birds prowl the shallow waters for frogs and small fish to snatch deftly from the water. Towering grasses rustle in the Gulf breeze while alligators lazily warm themselves on sunny roadside canal banks. 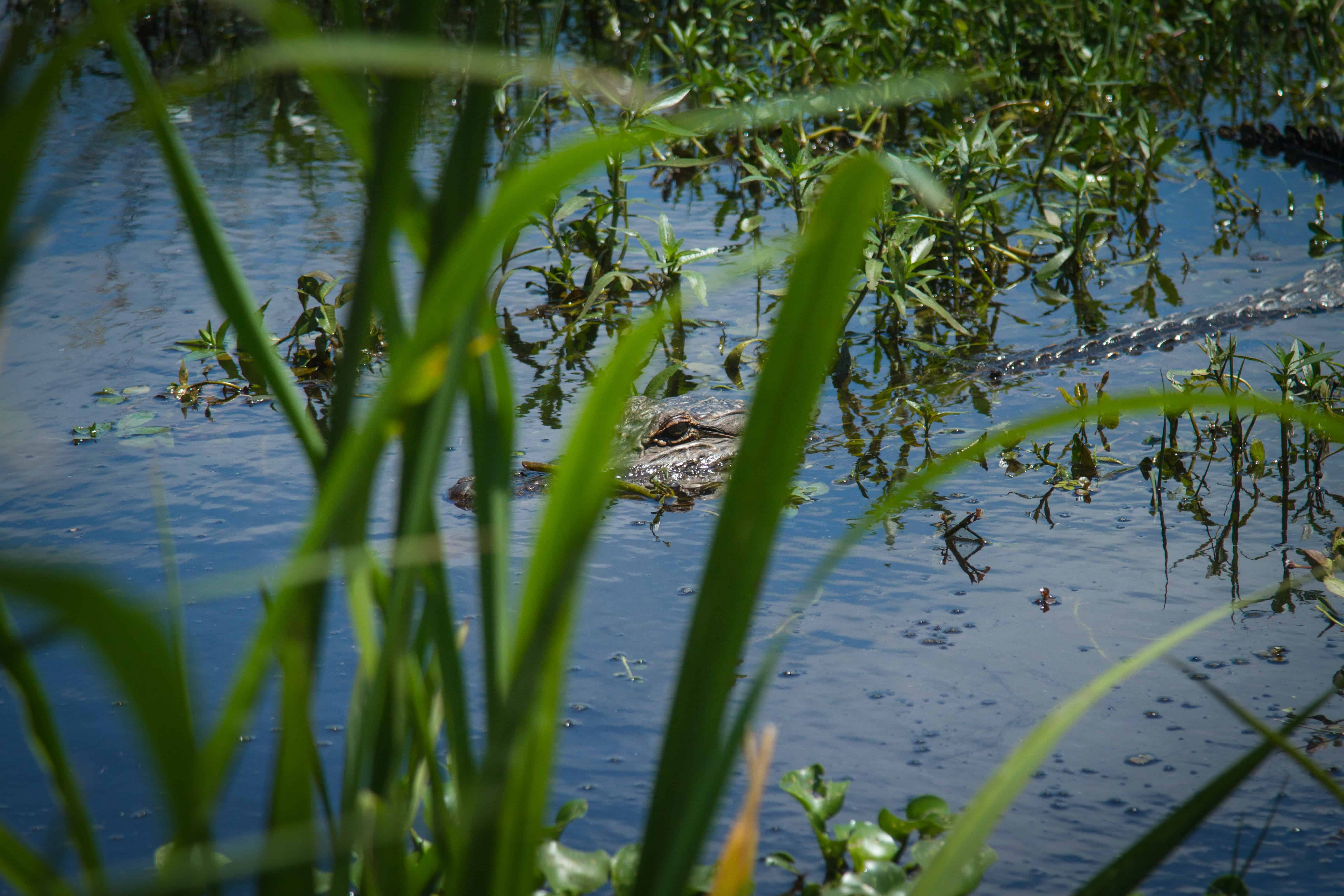 This vast wetland is known as Louisiana’s Outback and is home to over 400 varieties of birds. Add to that 132 different types of fish, 35 kinds of reptiles and amphibians, and 28 species of mammals. 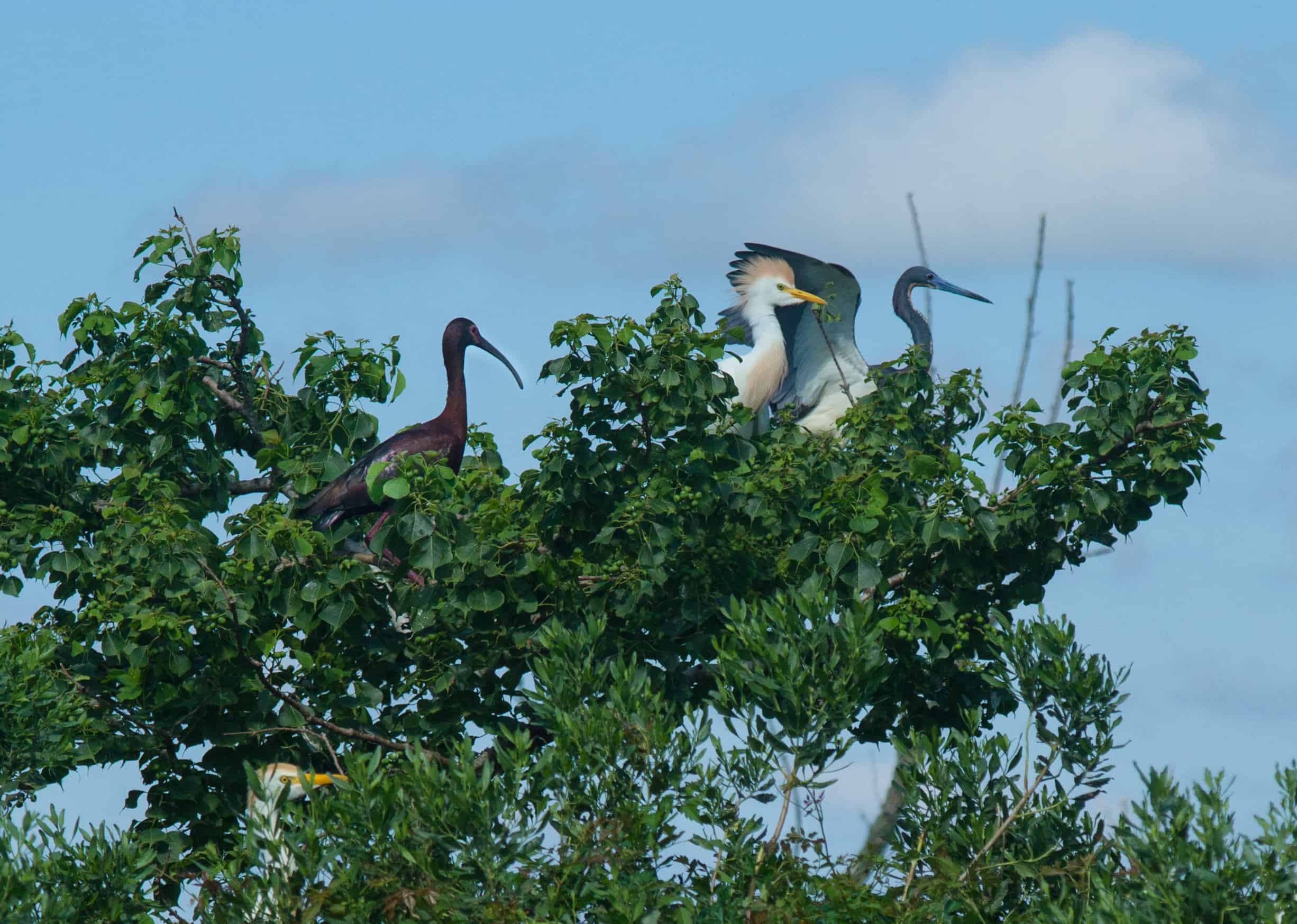 There are several ways to experience Louisiana’s Outback and the best is to travel the Creole Nature Trail All-American Road. One of only 43 All-American Roads in the nation, the Creole Nature Trail consists of almost 200 miles of scenic byway, including 26 miles of Gulf Coast beach. The journey begins at Adventure Point, located a few miles west of downtown Lake Charles in the city of Sulphur. 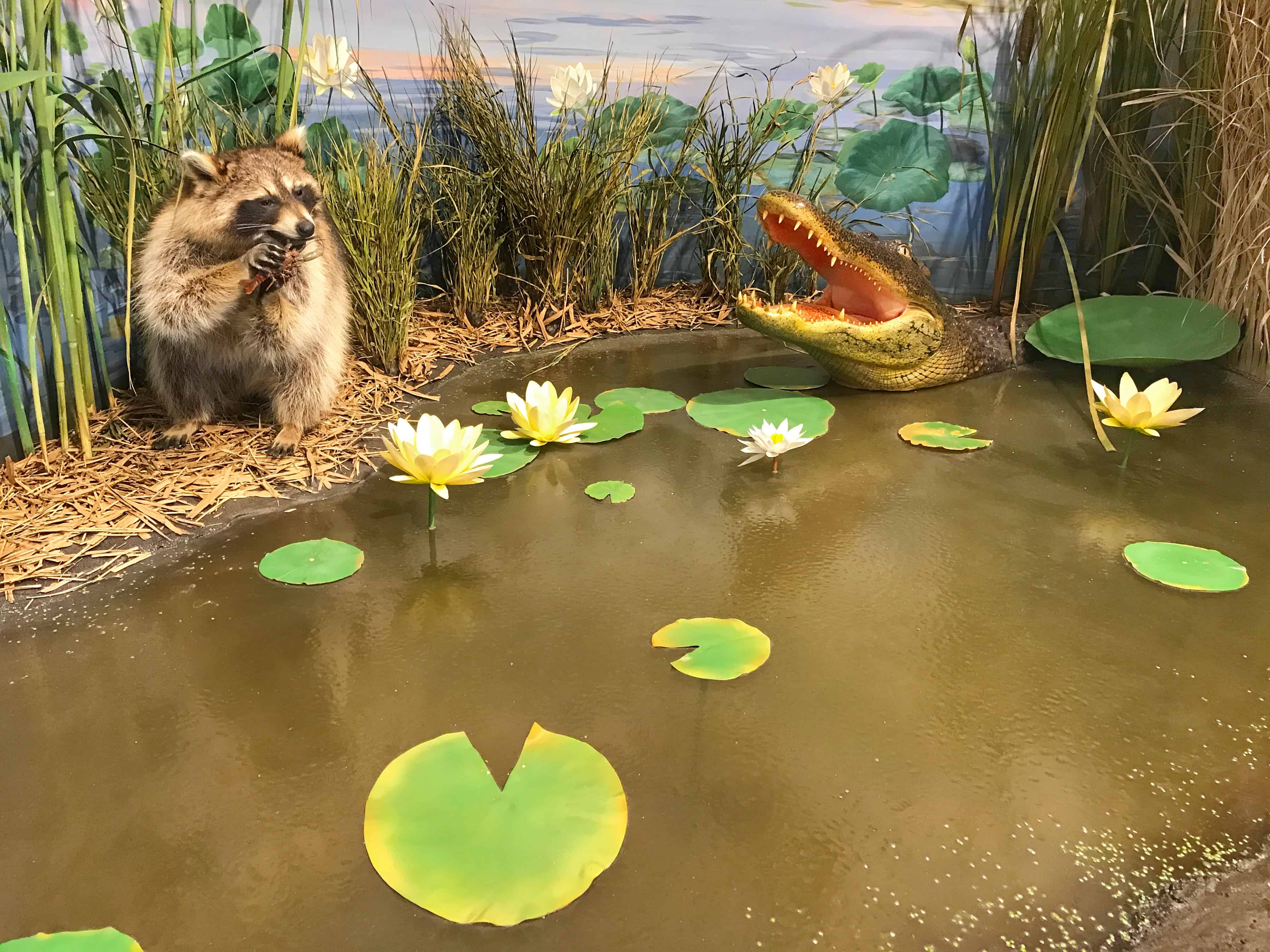 Here, immersive and interactive exhibits demonstrate the best places along the trail to photograph vibrant songbirds, how to catch fresh Louisiana blue crabs for dinner, and the multitude of ways locals enjoy the abundance provided by the coastal wetlands. Those traversing the trail should allow four to six hours to experience the main trail. The Creole Nature Trail loops from Sulphur, south to the Gulf of Mexico, east to Rutherford Beach, and north again to Lake Charles.

Another option is to charter a guided trip. Before dawn, anglers pull out of Big Lake Inn’s docks. They settle in for the short boat ride to the salty inland waters of Calcasieu Lake and tidal marshes. The sky slowly shifts from indigo to the rosy orange hue of sunrise as the 16 foot bay boats of Big Lake Guide Services plane out. 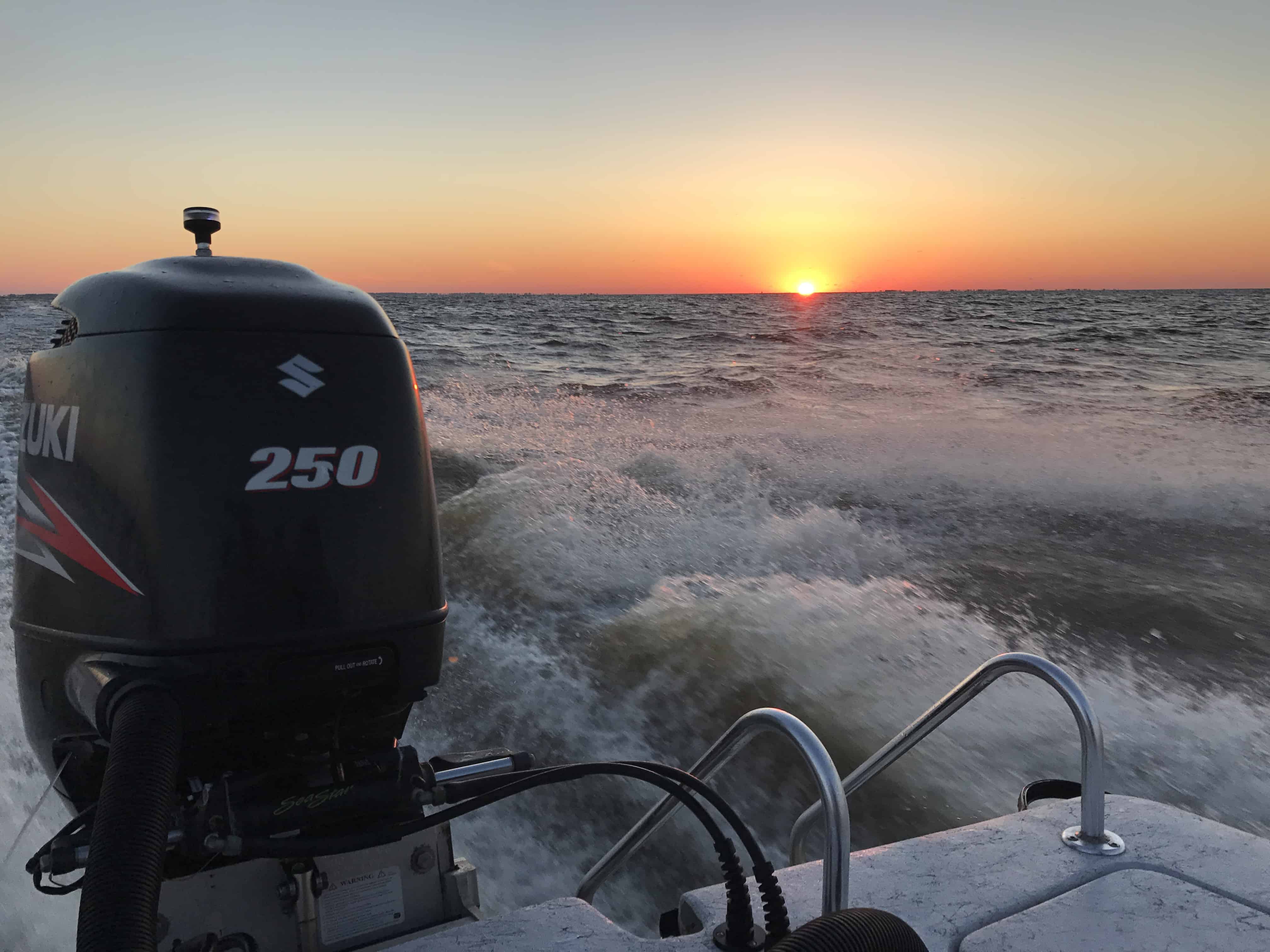 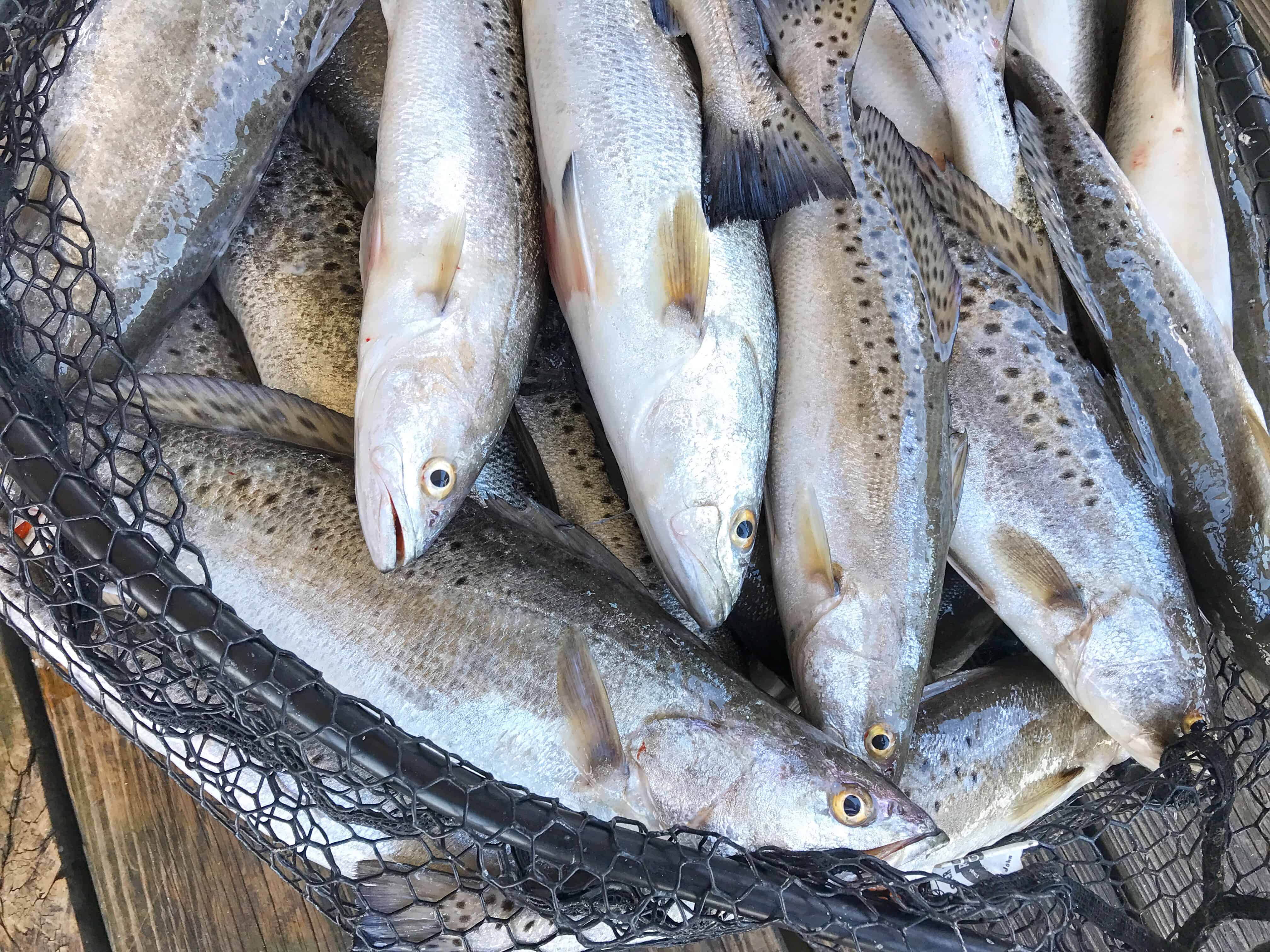 Grosse Savanne Eco-tours bring nature enthusiasts face-to-face with the flora and fauna that inhabit their 50,000-acre reserve. The trees are alive with the deep grunts and squealing bleats of thousands of nesting birds. The brilliant white reflections of the egrets ripple as the boat slowly coasts under the nests suspended over the water. 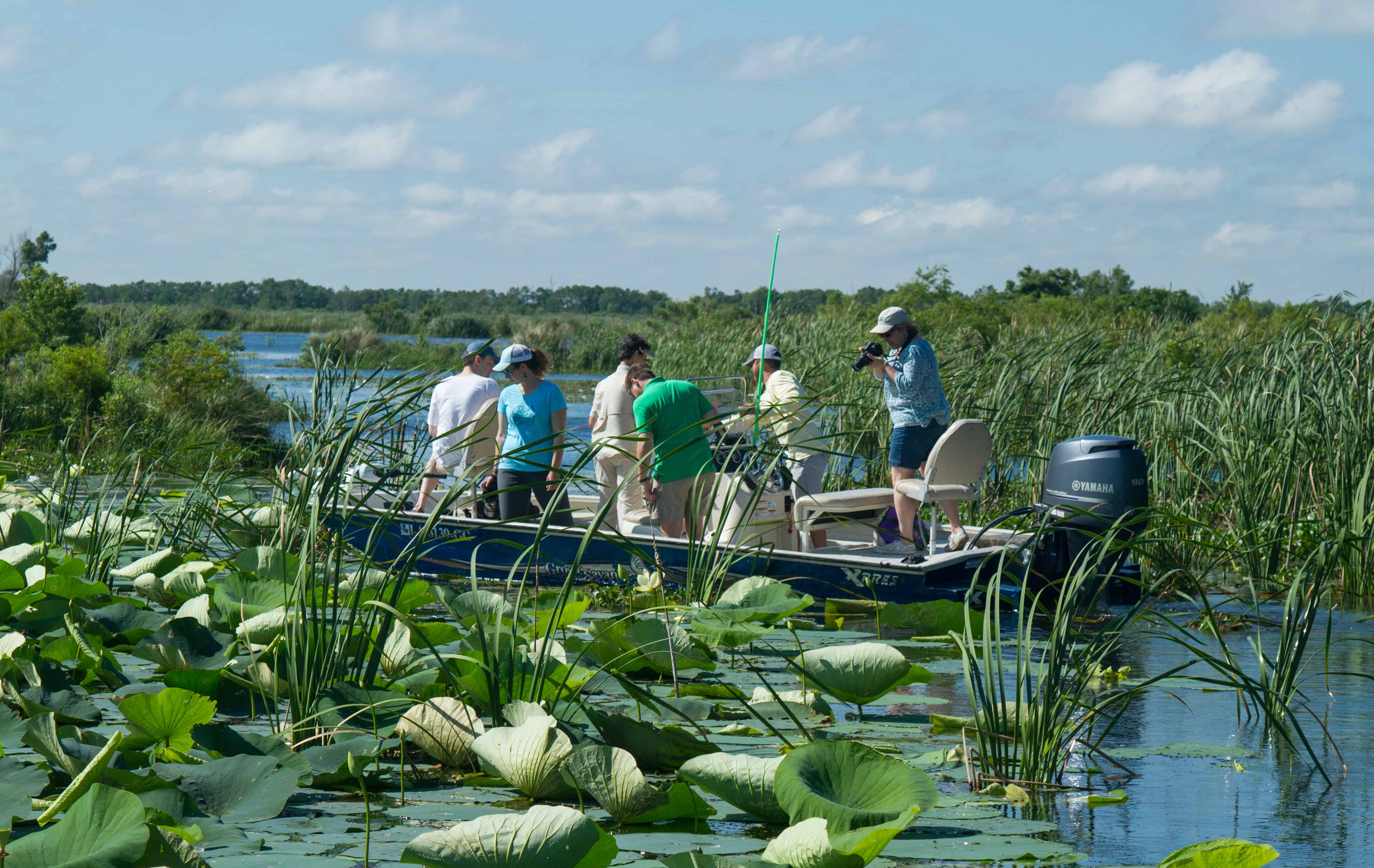 Down-covered chicks clumsily bob their heads in an attempt to get a better look when scores of White-faced Ibis take flight in a muffled rush of feathers and leaves. Drifting along, the sweet smelling blooms of American Lotus, purple Water Hyacinth, and White Spider Lilies sway in the passing wake. 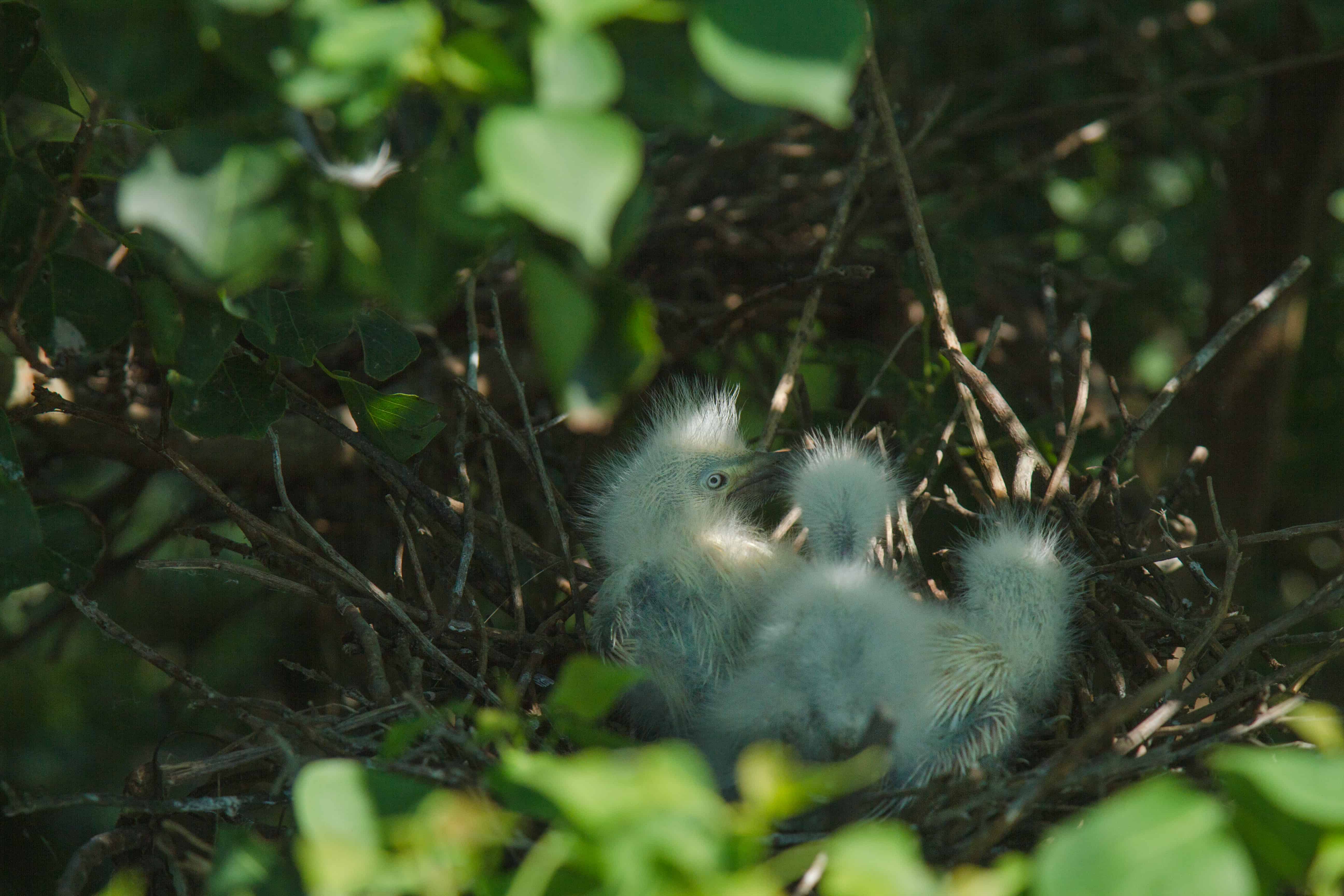 Where to Indulge Your Appetite

It’s easy to work up a hearty appetite with so many adventures to be had. Luckily, one doesn’t have to look very far for decedent Creole or Cajun cuisine. There are several restaurants that top the local “favorites” list. But a handful standout for their lagnaippe (Cajun French for “a little something extra”). And it just wouldn’t be Louisiana if there weren’t stout spirits and handcrafted brews to wash it all down.

Long time favorite, Seafood Palace, sits comfortably near the top of the list. A steady cloud of steam billows out from behind the unassuming facade of Seafood Palace, signaling the arrival of crawfish and crab season. 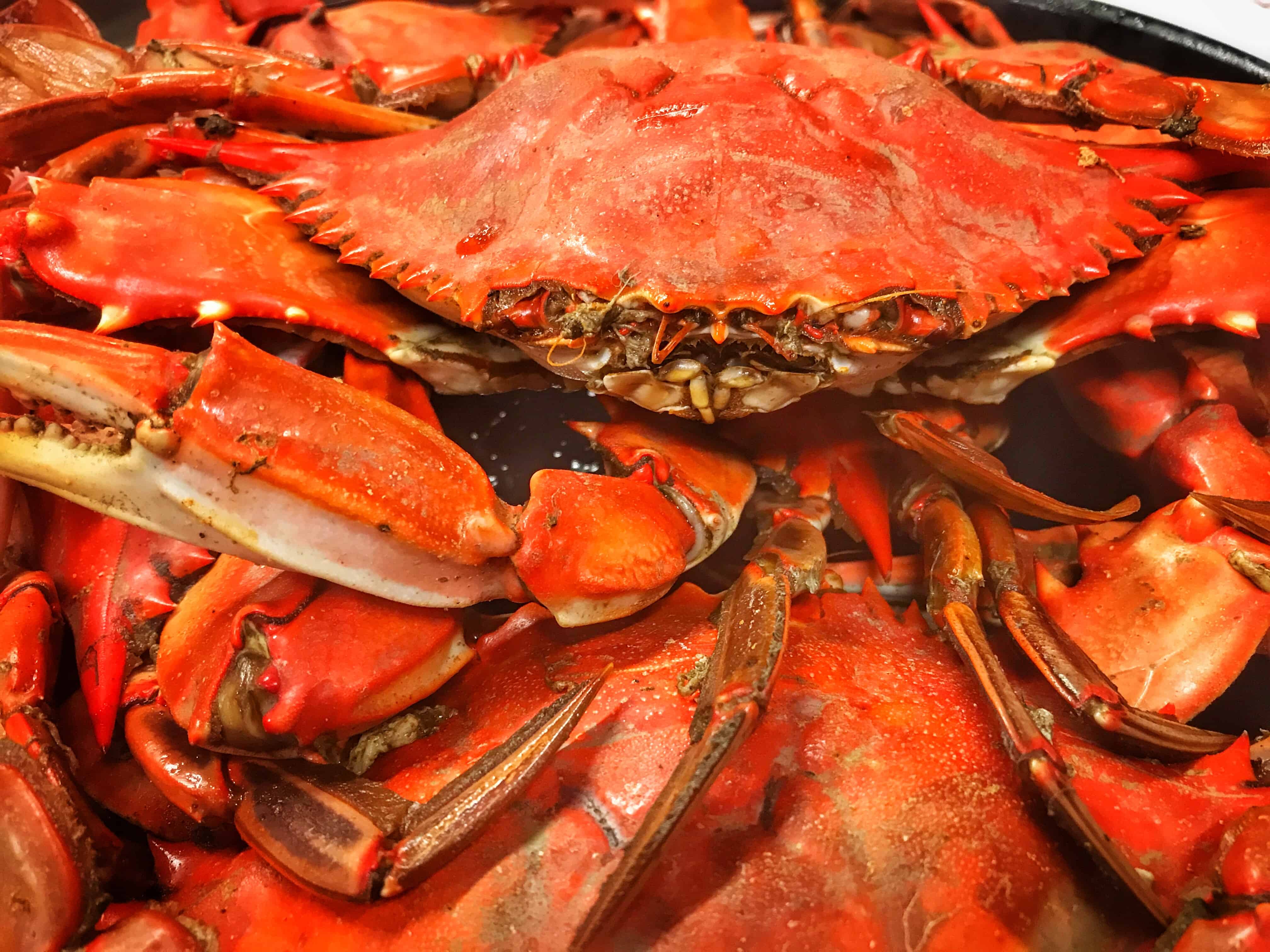 The spicy aroma of seafood seasoning punctuates the air and lingers long after the seafood platters have been cleared away.

On any given night, friends gather under the soft patio lights of Rickenjaks Brewing for a game of Giant Jenga, Pingpong, or Cornhole while listening to live music. The menu is stacked with cold local brews and fresh spins on classic dishes like their Lazy Pistoletes. Traditional pistolettes consist of small fluffy bread rolls stuffed with creamy seafood and cheese then fried. 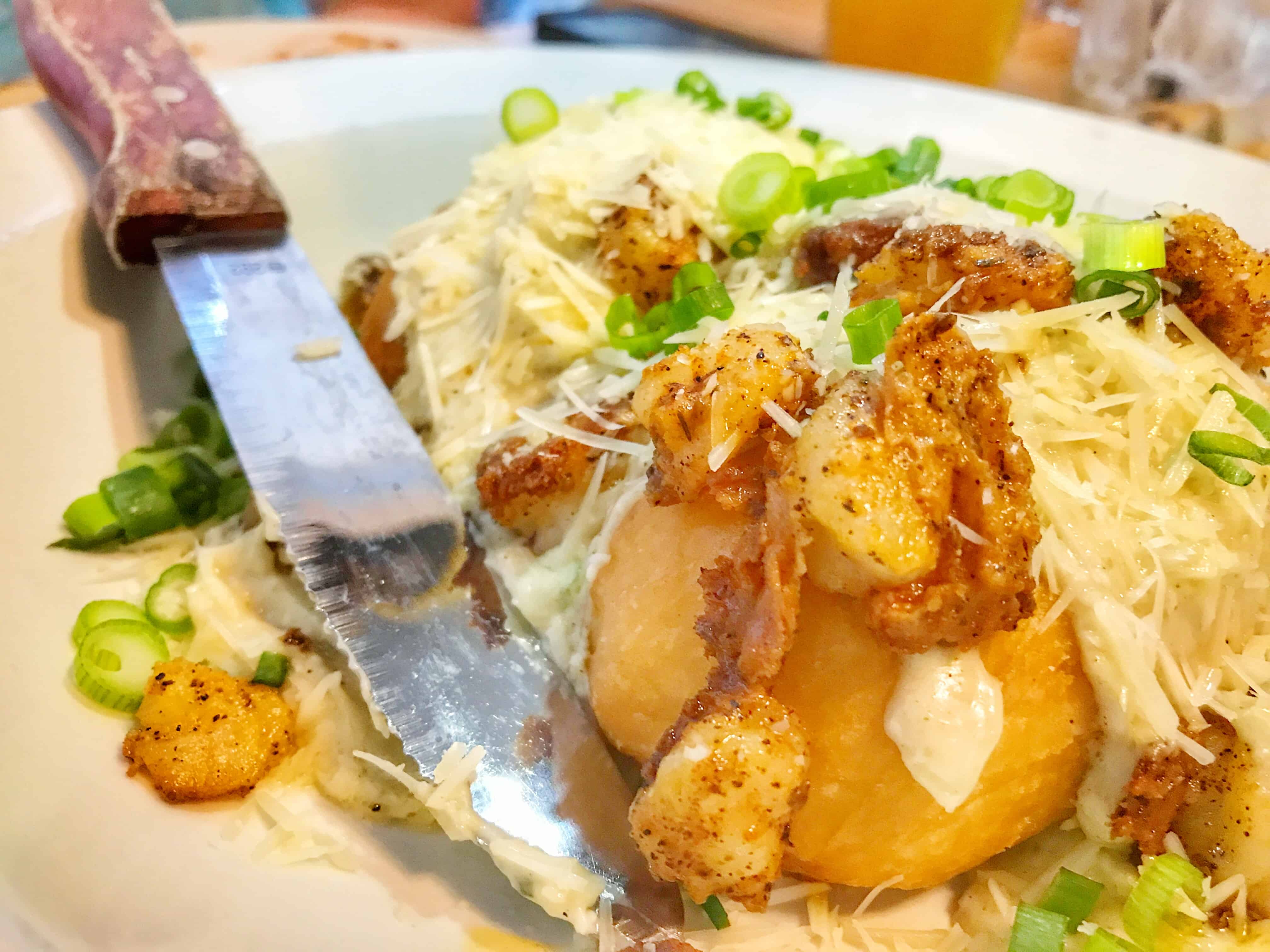 Rikenjaks forgoes stuffing the bread (hence lazy) and douses the fresh rolls in a rich, savory fondue. Next, they smother them in grilled shrimp, sharp parmesan cheese, and crisp green onions. 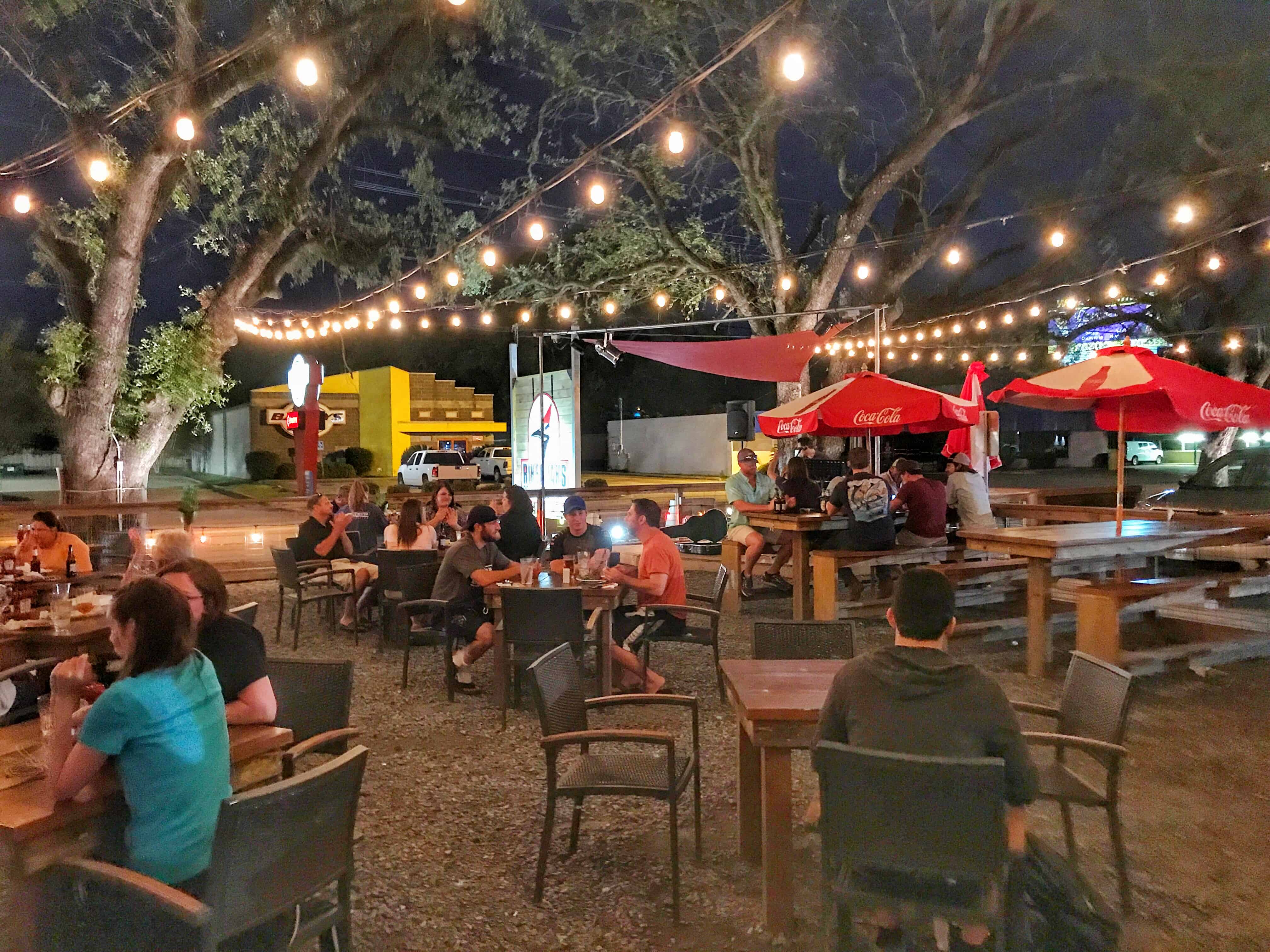 Everyone loves to back a hometown celebrity and Lake Charles is no exception. Born and bred native Chef Lyle Broussard crafts his menu at the iconic Jack Daniel’s Bar & Grill around the bold and fresh flavors of Southwest Louisiana. 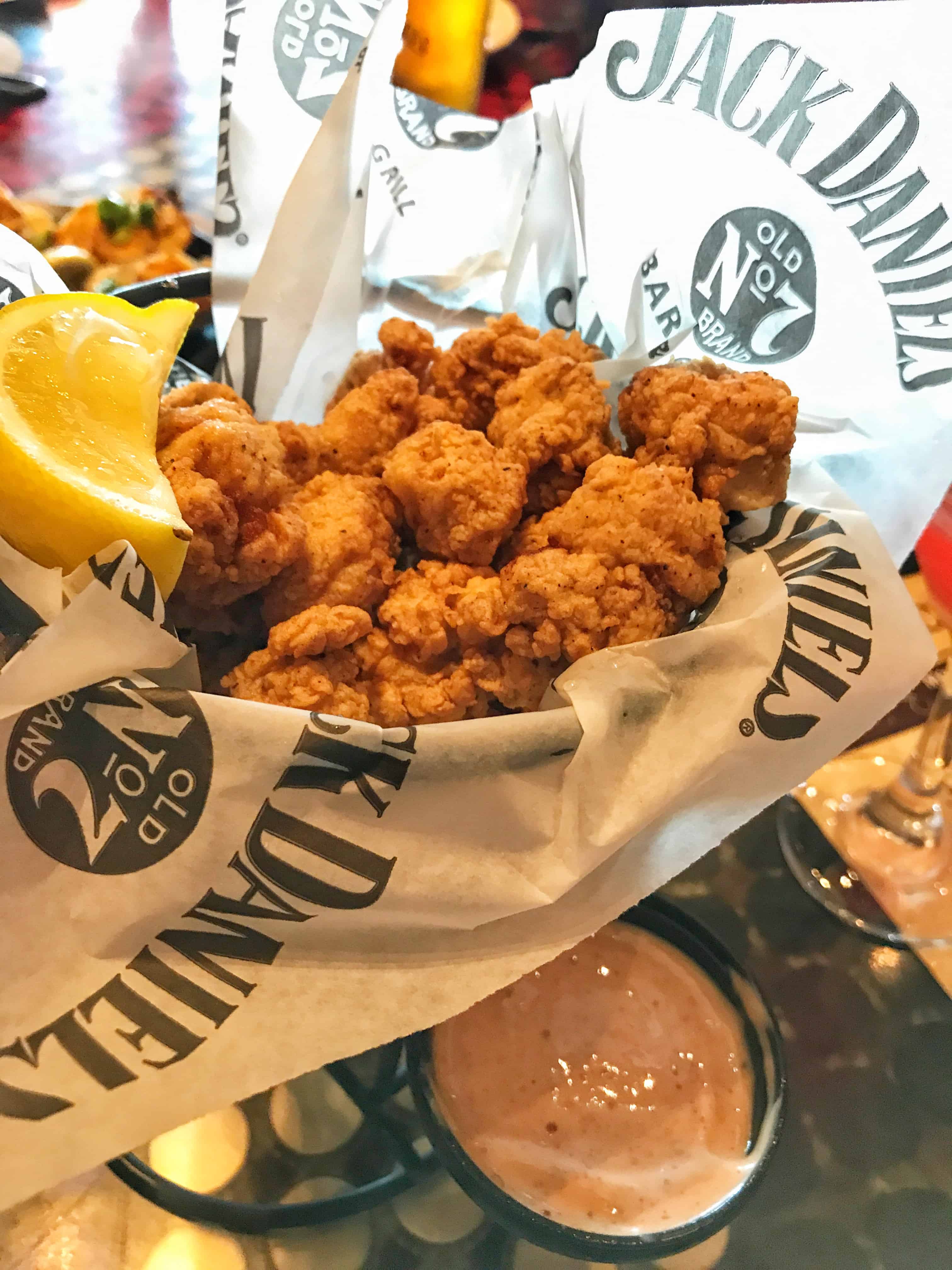 Located in L’Auberge Casino in Lake Charles, Broussard’s culinary signature marries his Louisiana roots, his Culinary Institute of America training, and signature Jack Daniel sauces. He creates dishes that speak to both locals and visitors alike. Broussard has been featured on The Today Show and History Channel’s All You Can Eat. In addition, he was named one of Louisiana Cookin’ Magazine’s 2016‘s Chefs to Watch.

Speaking of hometown, Crying Eagle Brewing Company burst onto the scene much like its name sake. Roughly translated, the name Calcasieu comes from a local legendary Atakapa Indian chief famed for his fierce crying or screaming eagle battle cry. 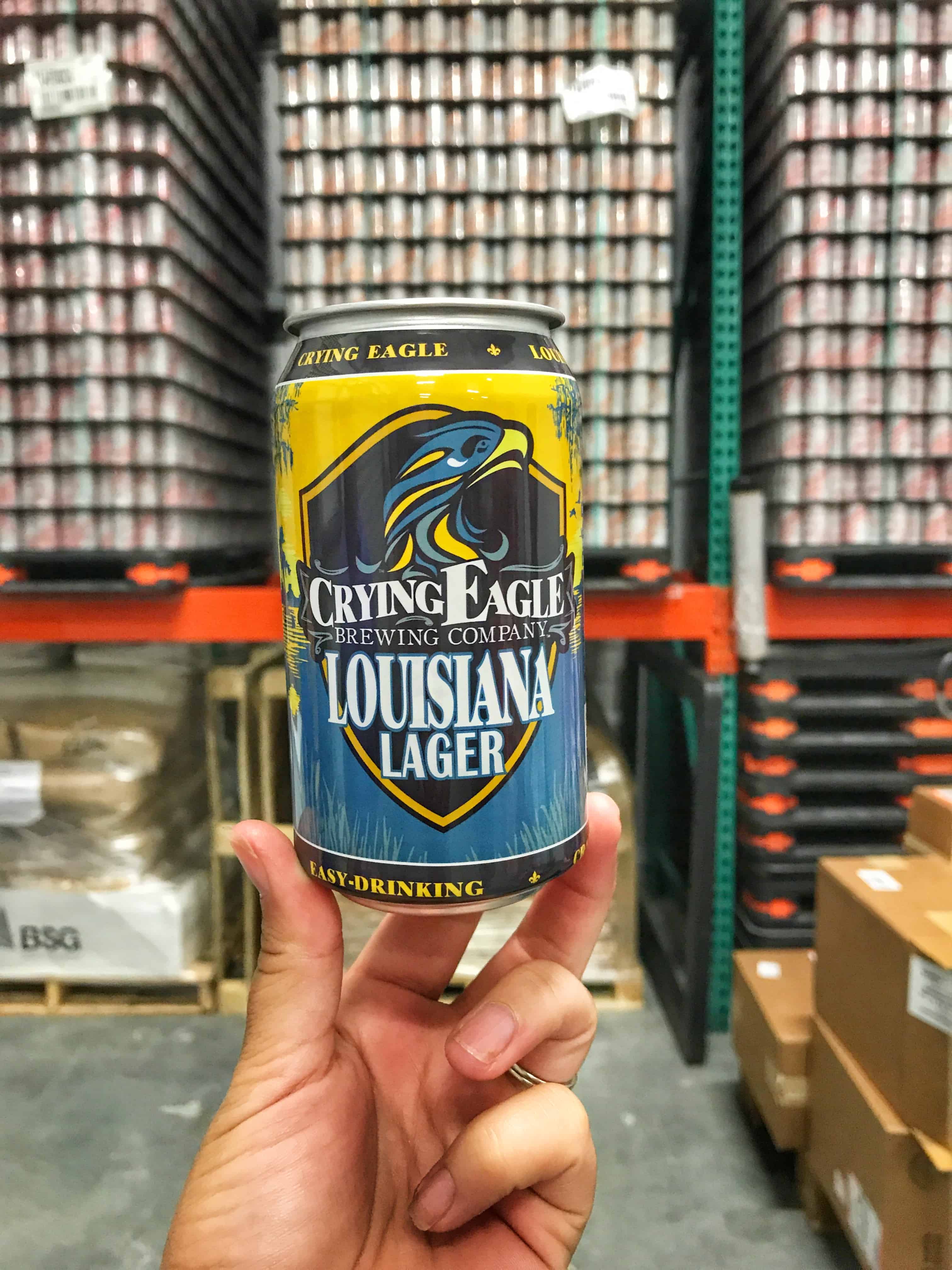 Equally legendary is the brews and vibes flowing from their taps. 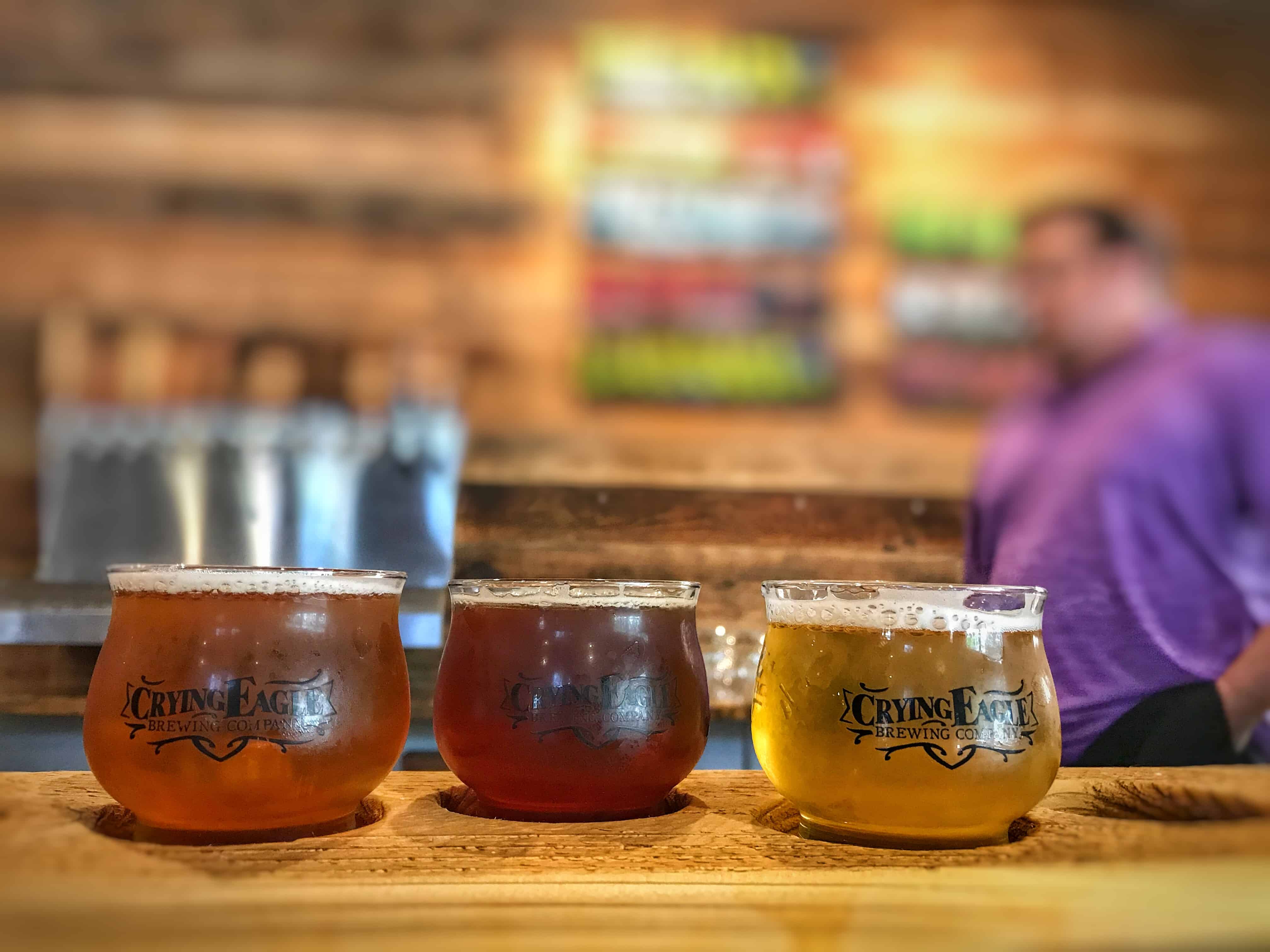 Floor to ceiling glass windows look out onto the gleaming stainless steel brewery. Outside, an open courtyard and washer boards games beckon guest to the beer garden.

Tucked into a broad bend of the Calcasieu River, Loggerheads remains a little known local favorite. Under the towering cypress trees, boaters tie off and come ashore to grab a quick lunch or listen to a local band. 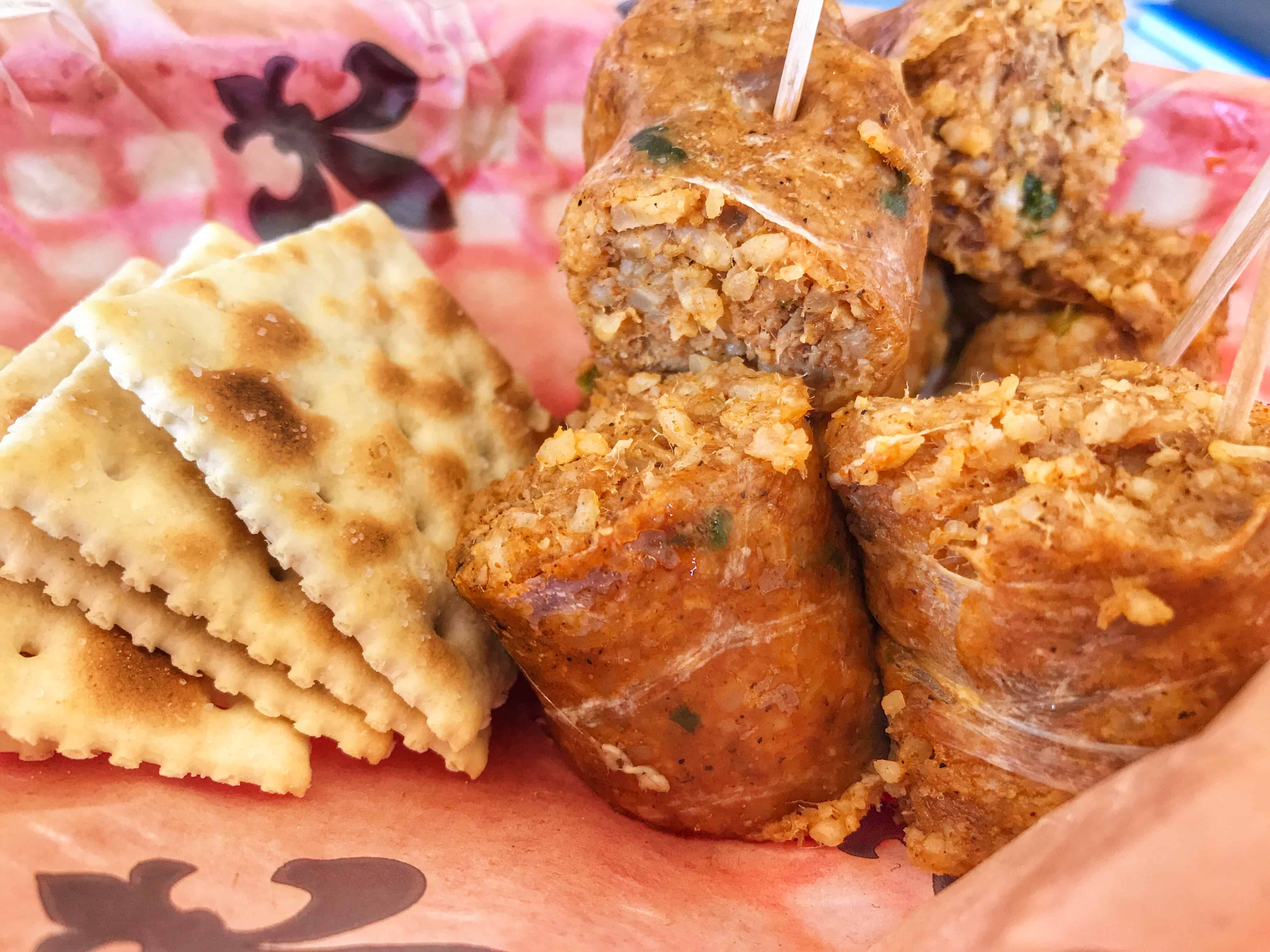 Their smokey house-made boudin, crunchy crawfish pies, and crispy duck wontons are easy to eat one handed while dancing to a local band on their two-story dockside patio.

Just east of Lake Charles in the small farming town of Lacassine, stands the nation’s largest privately owned rum distillery. The warm smell of molasses wafts through Louisiana Spirits’ rustic gift shop and into the Viewing Room where the free tour begins. 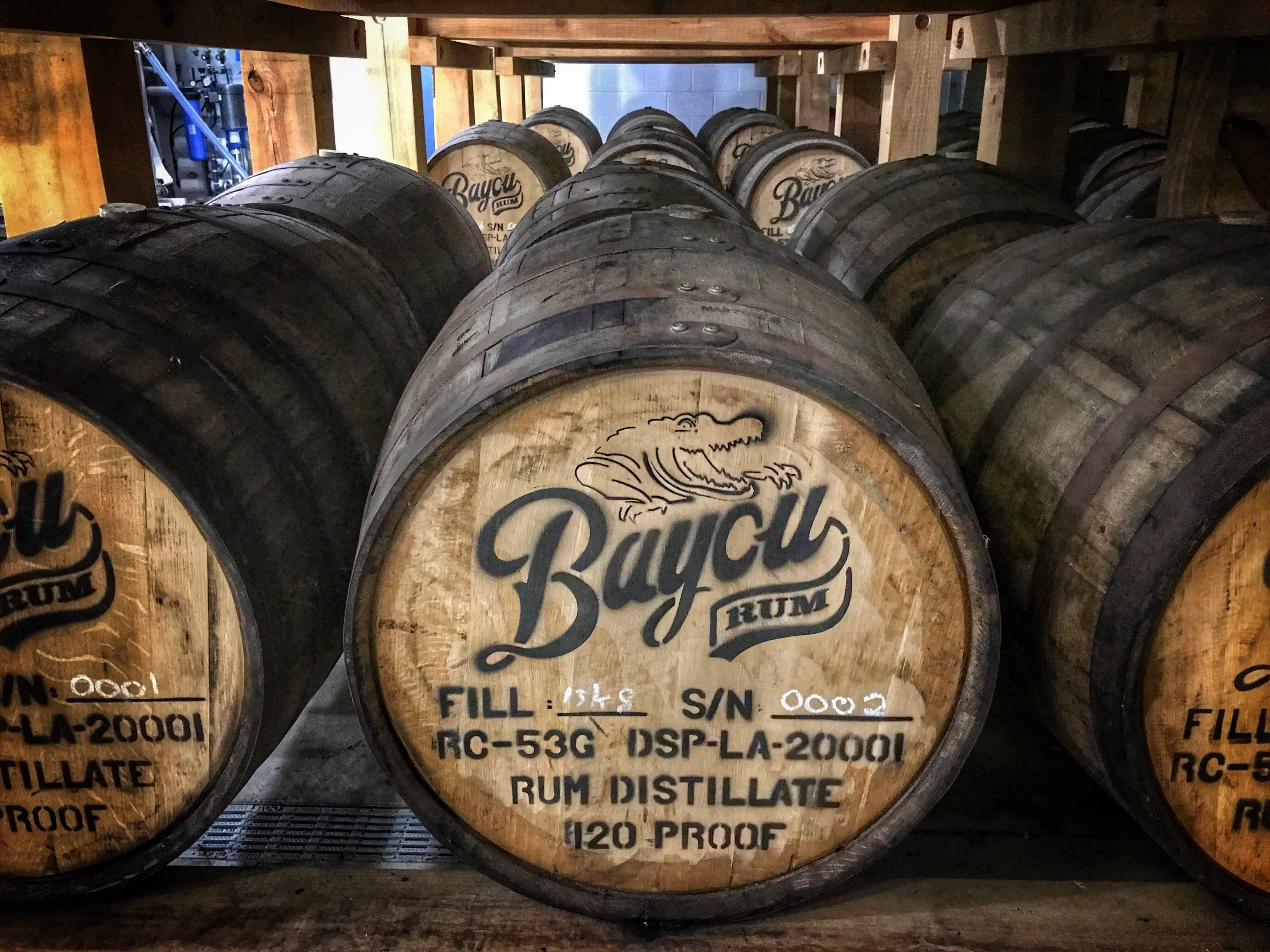 From there, guests become versed in the crafting of Bayou Rum from 100% Louisiana sugar cane through traditional copper pot distillation. Topping the quick tour is a complimentary tasting of Louisiana Spirits’ variety of rums at their polished cypress tasting bar. 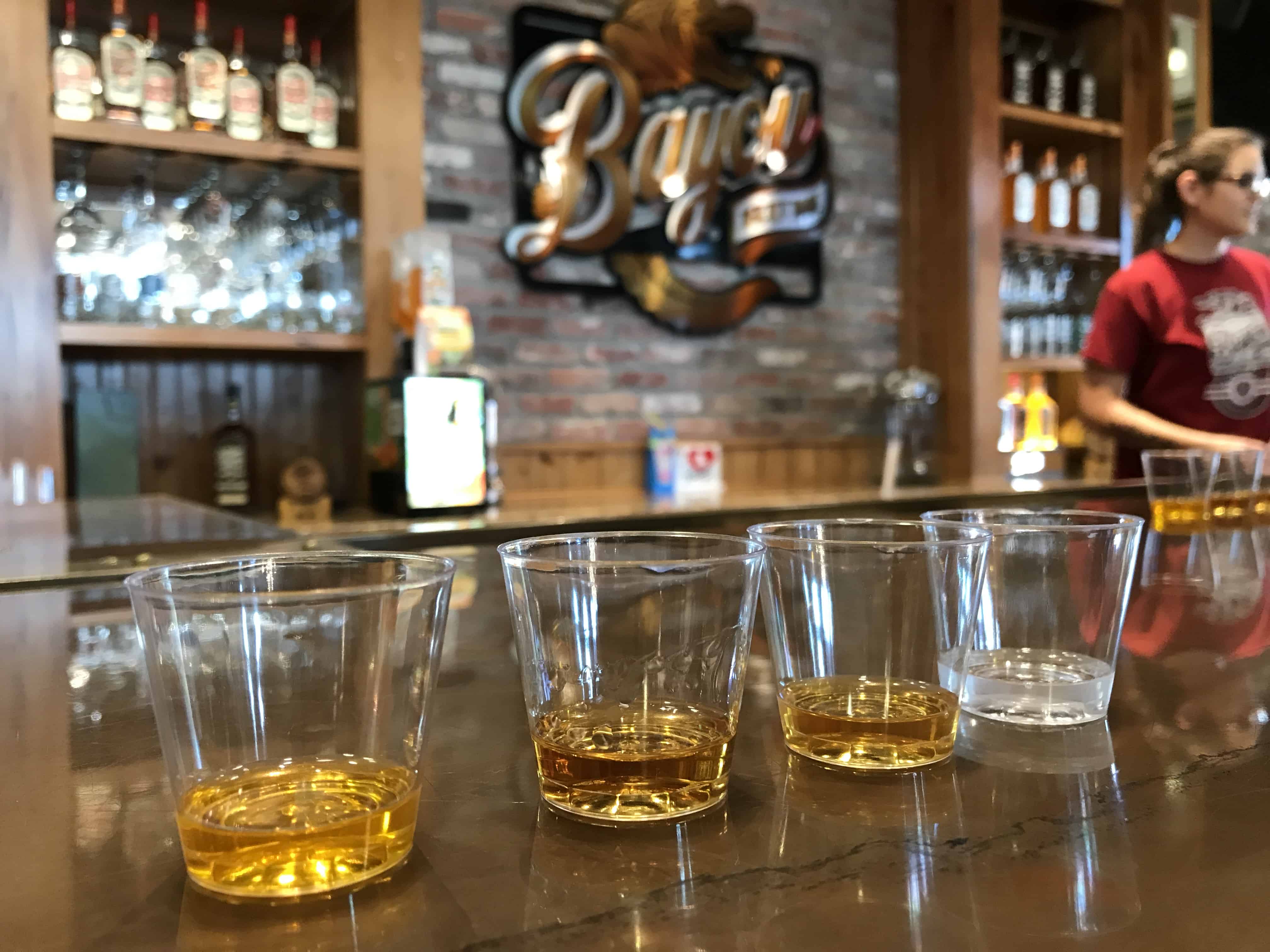 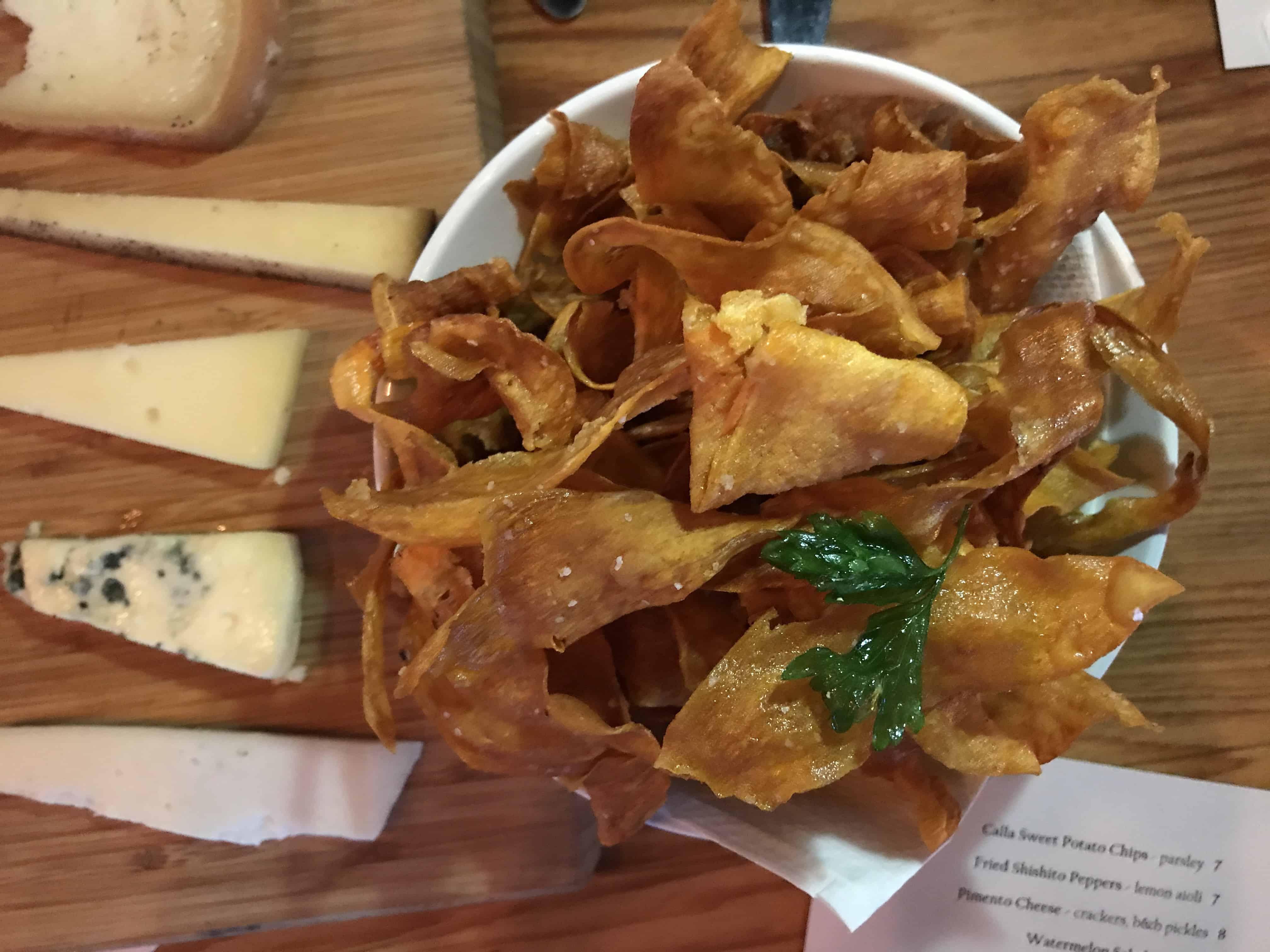 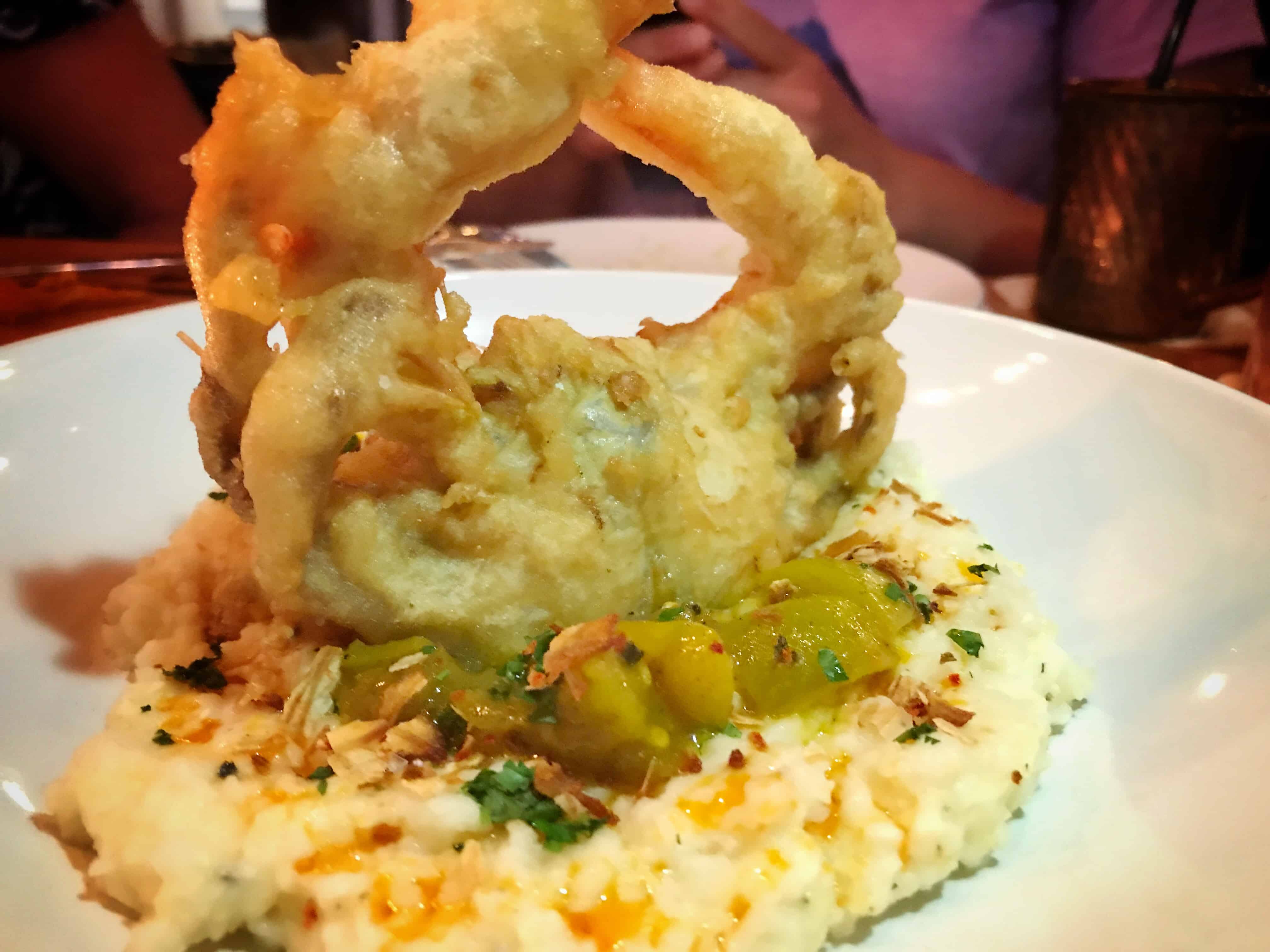 Even a trip to the restroom is a treat as Julia Childs joyfully prepares dinner through the overhead speakers.

Take in a Festival

With over 75 celebrations a year, Lake Charles dons the “Festival Capital of Louisiana” crown. So no trip to Lake Charles is complete without a party (or two). Lake Charles and the surrounding communities bursts with their own unique personalities. Those personalities are reflected in the many town festivals held throughout the year. The New Year erupts into a whirlwind of extravagant Mardi Gras galas, parades, and costumes. The Iowa Rabbit Festival, Starks Mayhaw Festival, and the DeQuincy Railroad Days Festival herald the arrival of Spring and the bounty it brings. 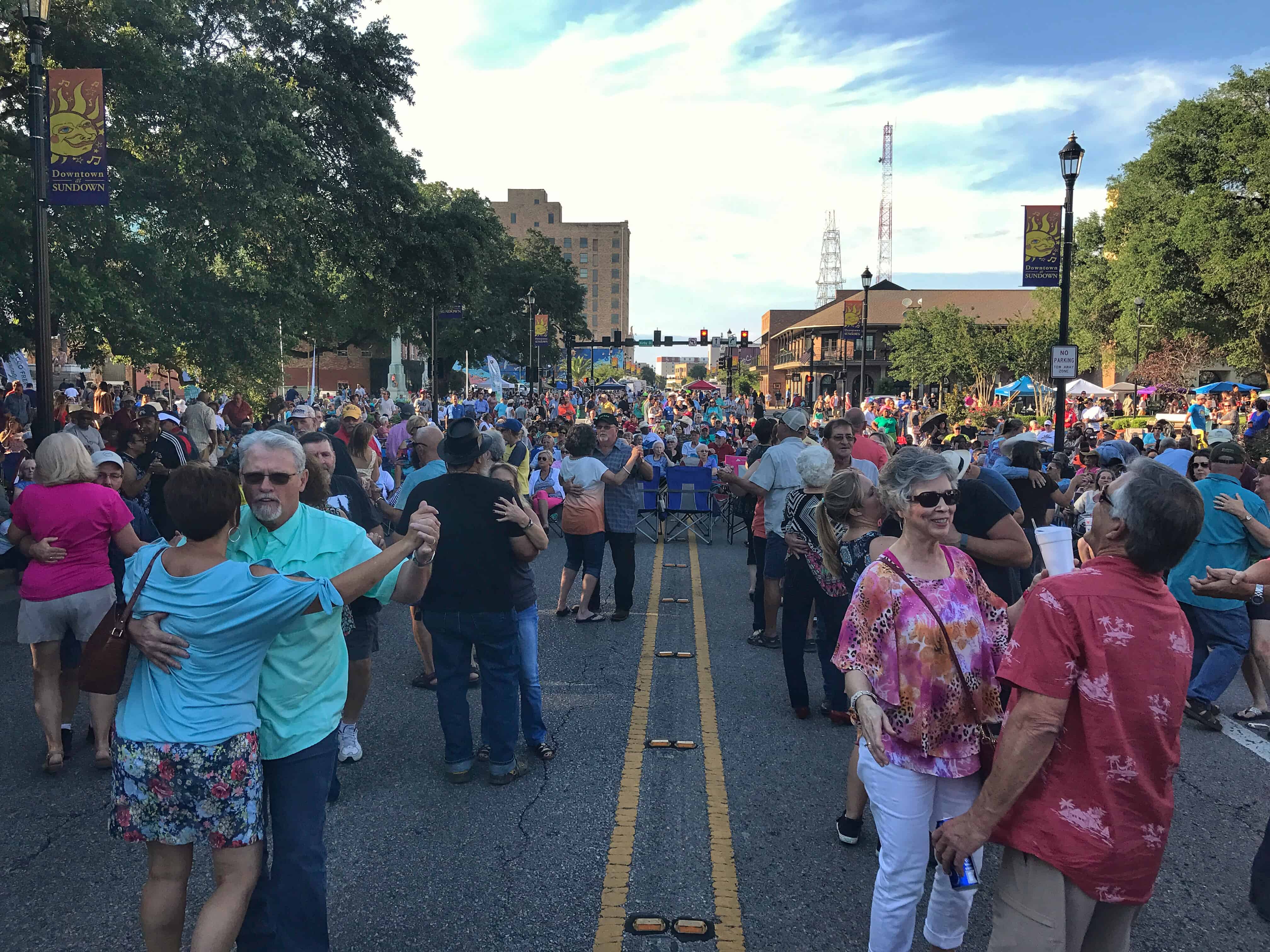 Summer brings pirates that invade the city of Lake Charles for Contraband Days. Bands and vendors shut down the streets Friday evenings for the outdoor concert series known as Downtown at Sundown. The rumble of supped up cars polished to a shine role in with the cooler weather of fall for the Stars and Stripes in the Park Classic Car Show and Boudin Wars competition. No matter the season, nor the reason, Lake Charles is ready to Laissez La Bon Ton Roulette.

The daughter of a free-spirited, surfing waitress and a professional cross-country mover, Jessica discovered most of the country from the dog trot of an eighteen-wheeler before turning 5 years old. She was raised along the banks of the Sabine River and was fortunate enough to be able to call both Texas and Louisiana home. She embraces her naturally curious soul, love of nature, and appreciation for culture. After marrying a 4th generation farmer who had never taken a vacation, an...read more