After all the tables are filled with the most eager diners, a line begins to form at the receptionist’s podium. It snakes out the long hall of the entrance and then down the sidewalk. Since Gumbo Shop on Saint Peter Street in the French Quarter of New Orleans doesn’t accept reservations, you should walk quickly, arrive early, or plan to wait your turn with the rest of the hungry folks. I can assure you, however, that your wait will be rewarded.

Gumbo Shop has won the Best Gumbo category in the BestofNewOrleans.com poll every year since 1999. Most likely that is because there is actually a legally-binding commitment to consistency in the recipes. This location became a restaurant in the 1940’s, and there have only been three owners from that period of time until now. Each successive owner has had to agree to keep the dishes on the menu that have made Gumbo Shop famous. The new owners are allowed to have their own nightly specials, but the core menu stays the same.

Inside the restaurant there are several alcoves and sections. One is even an outdoor courtyard with lush green plants and chirping birds. The vibe is casual and rowdy, at least on the weekend night when we were there. Many small bistro-style tables with granite tops and metal chairs provide the seating. We found it to be “close quarters in the French Quarter,” but pleasantly so, of course. 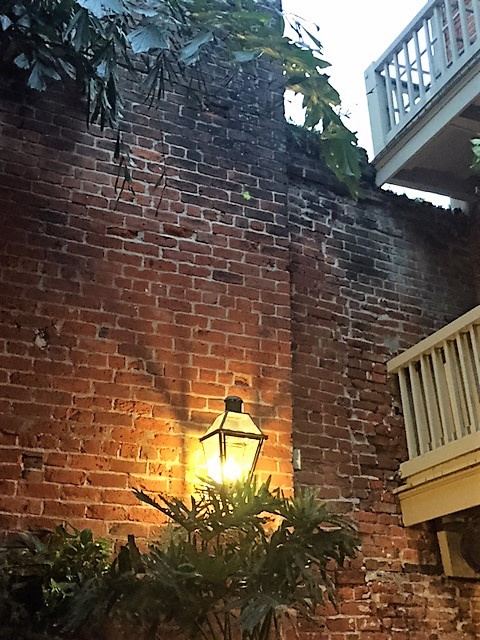 I asked our waiter Kenny what his favorite thing was about working at Gumbo Shop. “Meeting new people, and, of course, making a little money,” he added with a grin. I asked which he prefers to cook, creole or cajun foods. Another grin appeared as he said, “My wife does the cooking, but I love to eat cajun and creole combined.” Gumbo Shop has “Creole Cuisine” under its name, but it appears to me that often the lines between the two styles tend to blur. Creole dishes are said to be more sophisticated, to use more ingredients, and to include tomatoes. Using that definition then, the selections at Gumbo Shop are certainly creole.

My husband and I were hungry and curious, so we each decided to order the Complete Creole Dinner, knowing that we could sample each other’s choices and be able to try more dishes that way.

We started with a virgin strawberry daiquiri which was very refreshing. PINK and refreshing. And a nice, long loaf of French bread, hot out of the oven, was placed on the table. Perfect texture of crusty on the outside and soft on the inside. 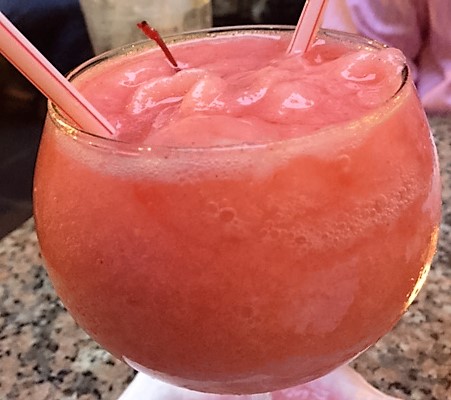 As our first course, he had the seafood okra gumbo, and since I have a shrimp allergy, I chose the chicken Andouille gumbo. Both MORE than lived up to the hype. Thick, flavorful and delicious.

For the main course, my husband chose the combination plate of jambalaya, shrimp creole, and red beans and rice, with a side order of smothered turnip greens.

I had the chicken espagnole with rice and a side order of macque choux corn (corn stewed with peppers, onions and tomatoes). The photos ALMOST do these dishes justice. They were bursting with flavor, and the portions were extremely generous. 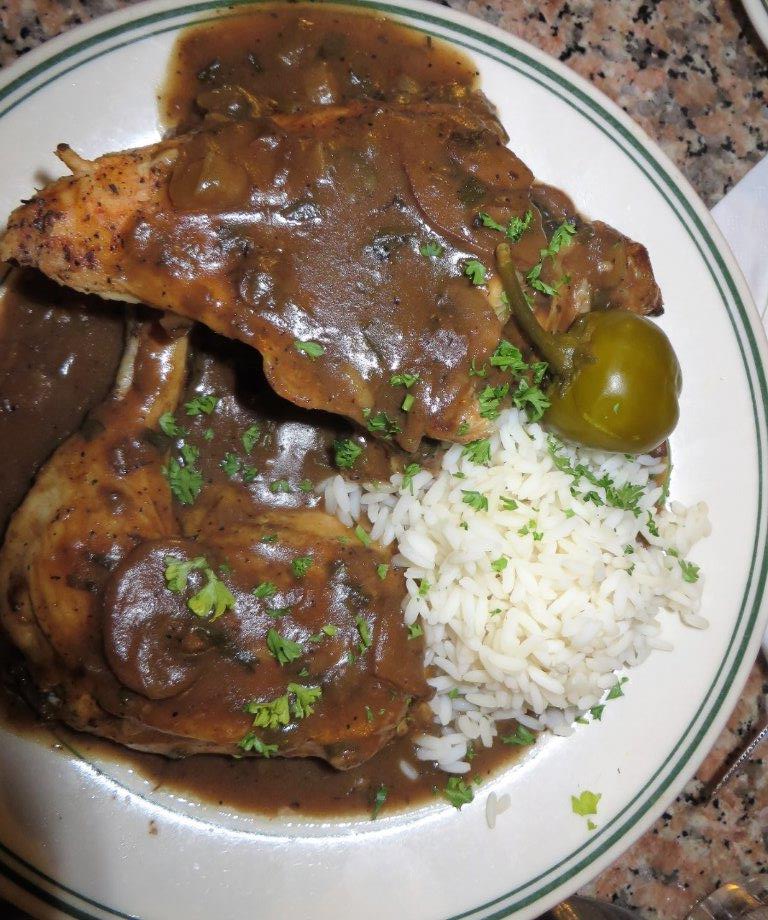 For dessert, we both chose the warm bread pudding with whiskey sauce. There were lots of raisins, plenty of cinnamon, and chunks of pineapple.

There are several mouthwatering recipes on the website – www.gumboshop.com — but sadly, the bread pudding isn’t one of them.   They do sell their own Gumbo Shop Cookbook. Maybe the secret is in that book. You can even order dinners delivered to your home in frozen, ready-to-thaw, heat-and-eat containers. I’m sure they are good, but actually being there among the people, the great servers, the smells and the piping hot bread is an experience you won’t want to miss.

Creole cuisine is a culinary element that deserves a special place in my Taste of the South articles and recommendations.

Connie Pearson is a freelance travel blogger and writer. She is a native Alabamian who has traveled extensively around the U.S. and the world and lived in Ecuador for four years, serving as a Baptist missionary. She "thinks, eats, and speaks Southern," but also enjoys sampling regional dishes and exploring new places and cultures. She is a retired elementary music teacher with 12 grandchildren and hopes to live long enough to dance at all of their weddings. Her blog is...read more