Bird conservation in Cambodia takes a new and unusual twist with their Vulture Restaurant at the village of Veal Krous. Old World vultures are in crisis because they are being poisoned by Dicloflenac, a chemical used in Asian cattle dips, but which is banned in Cambodia.

In order to prevent the vultures’ extinction, Cambodia entices them to remain safely within the country’s borders by regularly leaving an uncontaminated cow carcass at seven “restaurants” within the country. Thus, the vultures don’t roam as often to regions where the poison is still used. As a result, only in Cambodia are Asian vulture populations robust, and this country is critical to their continued survival. Supplementary feeding stations are necessary because Cambodia lacks enough natural large carcasses to sustain the vultures. The village of Veal Krous welcomes visitors to its Vulture Restaurant.

A Vulture Restaurant, you say, wondering about the appeal of the experience? The presentation is actually handled quite well. 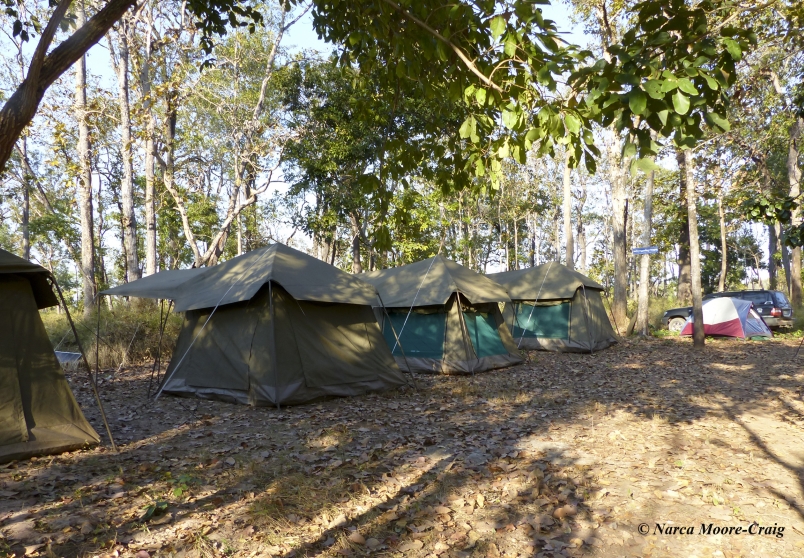 The villagers house us in a tented safari camp, with gear imported from South Africa. A nearby kitchen area provides a very tasty dinner and breakfast during our brief overnight stay, and a tented bush toilet and bush shower are available. 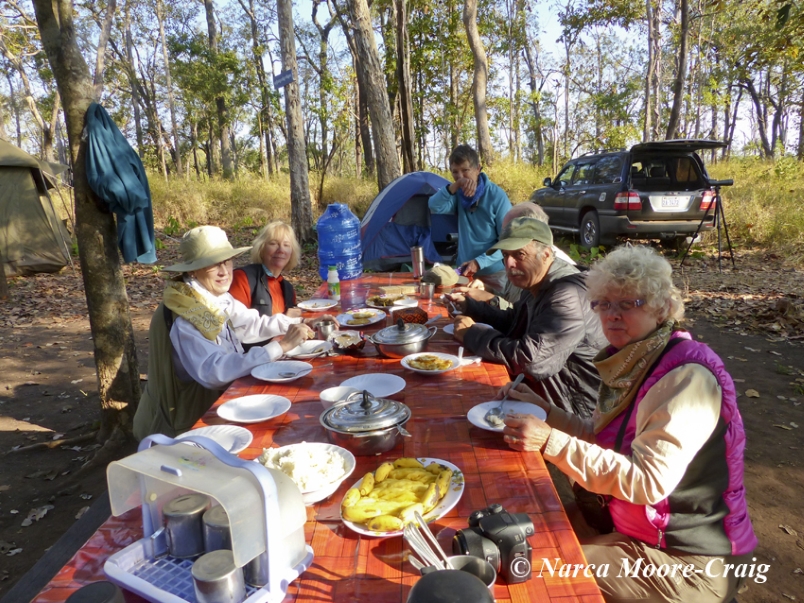 After we settle into our tents, Nara Duong (our excellent Cambodian guide) leads us on an afternoon hike past a small pond, where a dazzling Stork-billed Kingfisher loafs, and a Lanceolated Warbler mouses through the grasses. In the late afternoon, as we return to camp, the air fills with Germain’s Swiftlets, Asian Palm-Swifts, two Himalayan Swiftlets, and very elegant Crested Treeswifts. 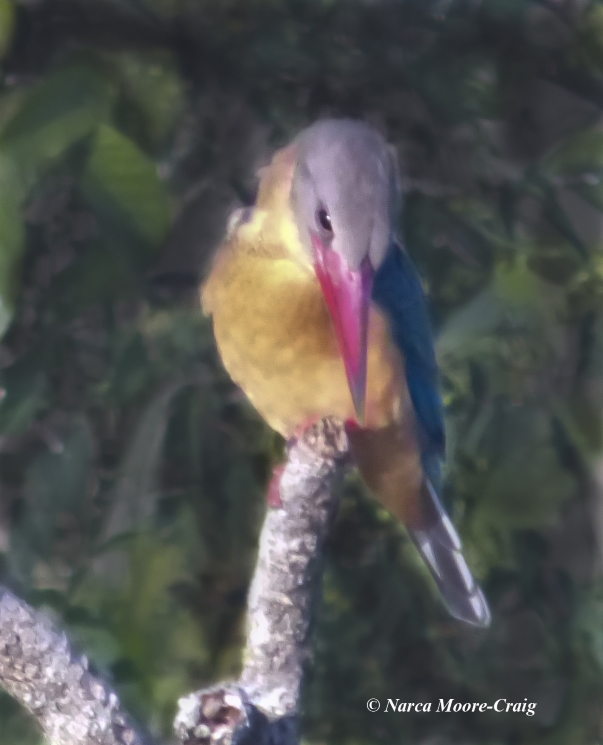 The big attraction comes the next morning. Before dawn, we leave our tents and hike on a level trail about a half mile to the two new blinds erected for viewing the feeding site, which is located about 0.2 mile further on. Both blinds are built on elevated platforms, commanding a wide view. 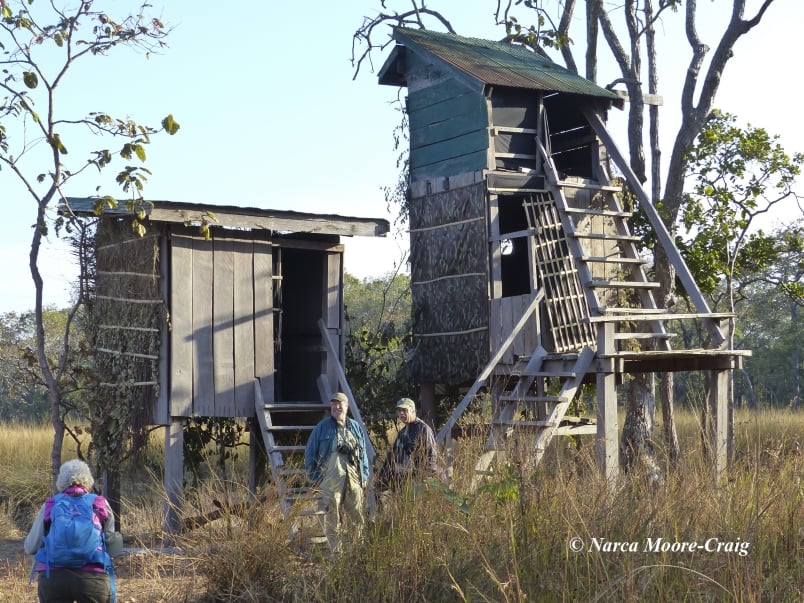 When it is still rather dark, a Golden Jackal checks out the distant cow carcass, but doesn’t stay long. As light grows, a magnificent Red-headed Vulture alights to feed. White-rumped Vultures also gather, though the Red-head is clearly dominant. Slender-billed Vultures visit the restaurant occasionally. 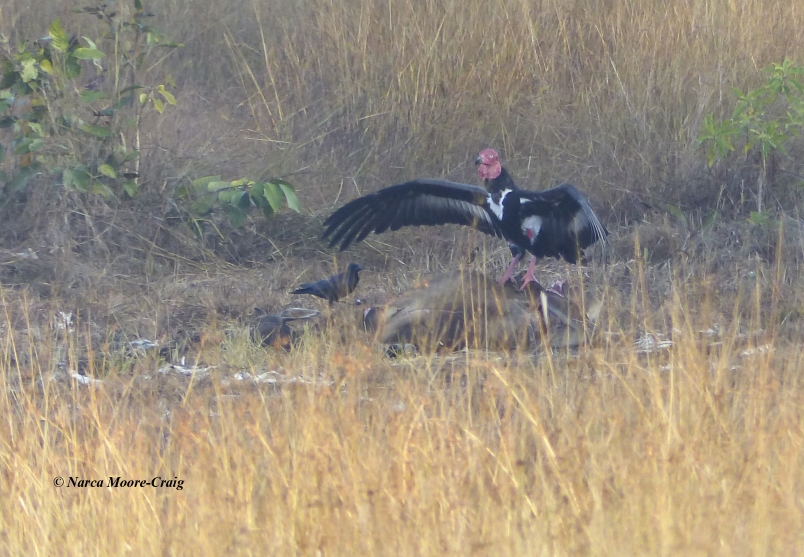 A big bad boy, the Red-headed Vulture, alights at the Vulture Restaurant, displaying his 8-foot wingspan 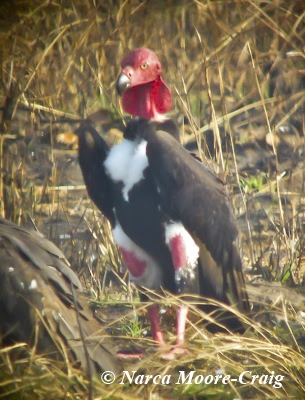 Asia’s vultures, once plentiful, have come perilously close to extinction within a mere 20 years; White-rumped Vultures have declined as much 99.9%! Similarly, the Slender-billed Vulture has declined by 97%; its only breeding colony in Southeast Asia is in Cambodia. Now, Cambodia’s feeding program holds out hope for arresting these vultures’ dramatic declines. In 4 years, the overall vulture population within Cambodia has nearly doubled.

If you would like to see an important conservation program in action, contact the Sam Veasna Center for Wildlife Conservation in Siem Reap to arrange your tour to the Veal Krous Vulture Restaurant. It’s a fascinating adjunct to a trip to see the ancient ruins of Angkor Wat.